The Debates: A Preview of the Campaign Ahead 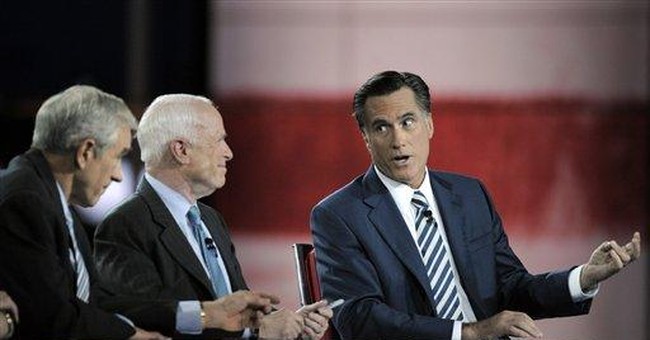 Memo to the nation: We really do need a better schedule of presidential primaries, one that tests the candidates over time, not in just a series of uncoordinated jump starts that could settle both parties’ nominations almost a year before their nominating conventions.

A staggered system of regional primaries would be a big improvement; so would a system that lets smaller states go first, followed by the larger prizes later. With a schedule of primaries like this year’s, there may be time for the candidates to strategize, but not to think. The current hodgepodge of primaries prompts people to pick a candidate to root for (Americans love sporting events) but it leaves people little time to ponder their choice.

There’s no fixing the system in time for this election year, but at least this past week’s debates, after so many face-offs that had too many candidates and not enough substance, did tell voters what each party was about at this fluid moment of American history. You could scarcely miss the contrast:

The dominant themes of the Republican debate were freedom, opportunity, economic growth, national security and life. All of which involve duty, sacrifice and risk, which aren’t exactly crowd-pleasers in this new Rome.

There was some real friction detectable in the GOP face-off, both personal and political, between John McCain and Mitt Romney, the Big Two. Mike Huckabee was on hand to referee, and Ron Paul was there as a reminder that the paranoid style in American politics is still very much alive and in full populist, goldbug, isolationist, xenophobic bloom.

This could be Mitt Romney’s last hurrah this foreshortened election year. He’s the Thomas E. Dewey of this campaign, the perfectly groomed and well-spoken CEO of a candidate who has a knack for saying just the right thing, whatever it may be at the time, but just isn’t trusted, or at least liked. He’s the model candidate on paper, but not at the polls.

The dominant theme of the Democratic debate was quite different, namely, how to expand the power of government so it can give us all we want, including peace and plenty. Not to mention self-esteem, diversity, general uplift and getting our own back. Elect one of us, said the last two Democratic candidates standing, or rather sitting in a Hollywood theater, and the poor we will no longer have with us, health care will be available for all, and wars will end.

Talk about crowd-pleasers, that’s the ticket. All we need do — from Day One, naturally — is tax (only the rich, of course) and bring the troops home pronto. Neither of the surviving Democratic candidate actually pronounced the word surrender. Nor did they explain, what with all the worries about a recession mounting, why now would be the right time to put the brakes on the economy. And there is no surer brake than higher taxes. Especially on investors.

One of the remaining Democratic hopefuls stresses Experience, the other Inspiration. Hillary Clinton’s experience, it turns out, is the kind that raises a certain distrust among those of us who have followed her through many a personal and political reincarnation. And as for the inspiration Barack Obama offers, though palpable when he’s on the stump, it tends to be solid as the air he stirs at his most elegant and eloquent. And you have to wonder after a while: Is that all there is?

In contrast, John McCain is anything but elegant. The man is no orator. But he is John McCain. Through and through, then and now, whether he’s up or down in politics. Who else would go to Detroit to say that the auto industry needs to improve its cars, not just demand more subsidies? Who else would choose Florida to assert that the federal government shouldn’t be subsidizing still more beachfront construction in hurricane-prone areas?

Senator McCain’s political fortunes may vary (and how) but not his principles. He may compromise when he wants to fix a problem instead of just fight it forever, as he’s done on the issue of illegal immigration and when it came to finally getting some judges past a Senate filibuster. But he’s not about to compromise when it comes to winning a war. He understands that in war there is no substitute for victory.

One may disagree with the man on this or that issue, as I did and do, profoundly, when it comes to his campaign finance “reform,” which violates the whole spirit of the First Amendment by restraining freedom of speech. But I’d rather disagree with a Senator McCain, knowing his character, than agree with a Hillary Clinton, because you know any stand she takes is good only till it becomes unpopular. (Where is she on the war these days? It all depends, of course, on how the war is going.)

The most eloquent performance during the Republican debate had to be that of Arkansas’ former governor but still Baptist preacher when he spoke in defense of life, and said there were certain principles one does not violate no matter how popular or unpopular they may be at the time.

While all the other candidates seemed to be angling for Ronald Reagan’s mantle by citing this or that accomplishment of the Gipper’s — a theme sure to appeal to Republican voters in the primary — it was Mike Huckabee who said that Ronald Reagan’s great achievement wasn’t the economic growth he let loose, or the Cold War he ended together with the late and unlamented Soviet Union and the nuclear arms race. No, his greatest achievement was the renewed spirit he brought to America after the depressing Carter Years. It was a fitting peroration after a debate that had had its petty moments.

If John McCain turns out to be the Repubican standard bearer, he’ll need a running mate who’s (a) a social conservative and (b) is a heckuva campaigner. Which is why one can easily envision the GOP’s ticket being announced at St. Paul this September under a huge banner reading: McCAIN-HUCKABEE.