Paul Dykewicz
|
Posted: Aug 04, 2017 4:00 PM
Share   Tweet
The opinions expressed by columnists are their own and do not necessarily represent the views of Townhall.com. 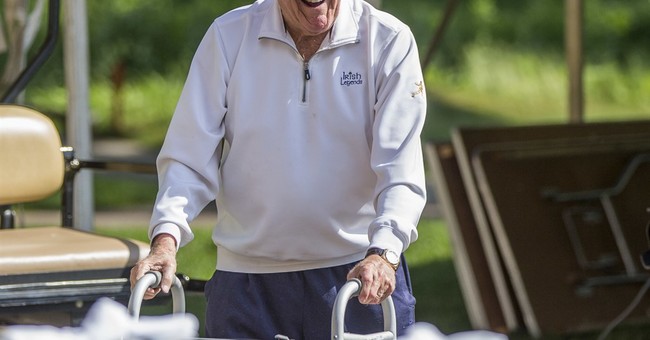 Ara Parseghian, who died Aug. 2 at age 94, earned wide acclaim for winning national football championships in 1966 and 1973 as head coach at the University of Notre Dame but his legacy also includes important efforts to raise millions of dollars for medical research to battle a disease that took the lives of three of his grandchildren.

Parseghian, who served two years out of the limelight in the U.S. Navy during World War II, reached the pinnacle of college football coaching during his 1964-74 tenure at Notre Dame, especially for returning the storied program to prominence after it had not achieved a winning record since 1958. However, the legendary coach received devastating news in 1994 when his three youngest grandchildren, Michael, Marcia and Christa, were diagnosed with the deadly Niemann-Pick Type C (NPC) Disease.

Known as a master motivator and strategist as a coach who compiled a 95-17-4 won-loss record at Notre Dame, Parseghian and his family applied the same dedication in forming the Ara Parseghian Medical Research Foundation as a non-profit organization to seek a treatment for the disease. The effort to champion medical research has generated tens of millions of dollars to advance the goal of seeking a treatment for the scourge that afflicts children.

On the foundation’s website is a quote from Parseghian, who explained, “This is an organization of volunteers drawn by the urgency of the cause and compelled by the value of a child’s life.”

The foundation’s mission gained the University of Notre Dame as a partner in the spring of 2016 to ensure required long-term administrative support. As a result, Notre Dame launched the Ara Parseghian Medical Research Fund and now coordinates fundraising, recruiting of medical researchers, grant administration, marketing, interaction with NPC families and hosting an annual science conference.

The foundation has raised awareness about the rare disease that was little known in 1994, with no treatments and only two medical researchers in attendance at the first conference hosted by the group. Since then, the foundation has raised over $45 million, supported more than 75 scientific labs around the world and hosted an annual conference that now attracts 75-plus NPC researchers.

Cindy Parseghian, the mother of the Michael, Marcia and Christa Parseghian, co-founder of the foundation and a Notre Dame trustee, said the donors, volunteers and researchers have combined to achieve “significant gains” in understanding NPC disease and developing effective treatment for the affected children.

My personal knowledge about the kindness of the Parseghian family includes their assistance with my inspirational book, "Holy Smokes! Golden Guidance from Notre Dame's Championship Chaplain." Ara Parseghian graciously shared some incredible stories about his relationship with the university's legendary sports chaplain, Rev. James Riehle, who was part of the coach's national championship football teams.

Coach Parseghian also provided much appreciated praise for my book that I am honored to have on the top of the back cover: "Fr. Riehle was a good friend and integral part of my teams' successes, including two national football championships. Paul Dykewicz's well-researched and enjoyable book highlights his valuable contributions. You'll discover in these pages how fun, faith and effort can lead to happiness and success.”

Fr. Riehle's first game as the Notre Dame’s football team chaplain was the famed 10-10 tie in 1966 between Notre Dame and Michigan State that propelled the Fighting Irish to the national championship. Parseghian received criticism after the contest, which the media described as the “Game of the Century,” for not taking big risks as time wound down to try to score against the Spartans’ vaunted defense led by All-Americans “Bubba” Smith and George Webster.

Parseghian’s decision to run the ball to avoid an interception while Notre Dame was deep in its own territory in the waning seconds proved prescient as the Fighting Irish kept its No. 1 ranking and trounced the University of Southern California the following week, 51-0, to gain the national title.

Notre Dame had sustained injuries to key players before and during the game again Michigan State but backup quarterback Coley O’Brien led the Fighting Irish back from a 10-0 deficit to earn a hard-fought tie. As criticism of Parseghian dogged the coach after the game for allowing it to end in a tie before college football adopted overtime to ensure each game had a winner and a loser, the coach jokingly started to tell the chaplain it was his fault Notre Dame did not win.

“We used to kid about that from the time of 1966 all the way up until the time that he passed away,” Parseghian told me when I was researching and writing my book.

Even though many people, including certain coaches, thought having a chaplain on the sideline might provide an edge in a close game, Fr. Riehle refrained from seeking divine intervention to win. But both Notre Dame players and coaches said the chaplain’s pre-game Masses and football-related homilies helped to motivate them and preceded some huge upset victories against more talented teams.

Parseghian showed strong leadership while coaching at Notre Dame and asked every player and coach on his teams to attend each pre-game Mass. As a Presbyterian at a Catholic university, Parseghian said he understood not everyone shared the same beliefs but he thought it was important to join together and advised people to pray in their own way.

Both Parseghian and Fr. Riehle were portrayed in the move RUDY, about a walk-on football player who the coach kept on the team after seeing the undersized, 5’7” would-be student athlete give great effort on each play during a try out. Fr. Riehle played himself in the movie’s scene in which he led the pre-game prayer and blessed each player before the team took the field.

“All Fr. Riehle or Coach Parseghian had to do was give you a glance to communicate a message,” former Notre Dame and Washington Redskins quarterback Joe Theismann told me when I researched my book.

Parseghian’s glance toward the heavens will remain visible in a statue outside the Notre Dame football stadium that shows his players carrying him off the field after winning his final game as the university’s coach. Depicted in the statue lifting Parseghian is former walk-on player Peter Schivarelli, who manages the Music Hall of Fame band Chicago and is a benefactor of the Ara Parseghian Medical Research Foundation and many other charities.

During an interview for my book, Schivarelli said it was important to erect the statue while the coach remained alive to enjoy its dedication in 2007.

With Parseghian’s leadership as a top football coach, medical research fundraiser and man of faith, he leaves a distinguished legacy for others to emulate.