Paul Dykewicz
|
Posted: Apr 05, 2016 12:01 AM
Share   Tweet
The opinions expressed by columnists are their own and do not necessarily represent the views of Townhall.com. 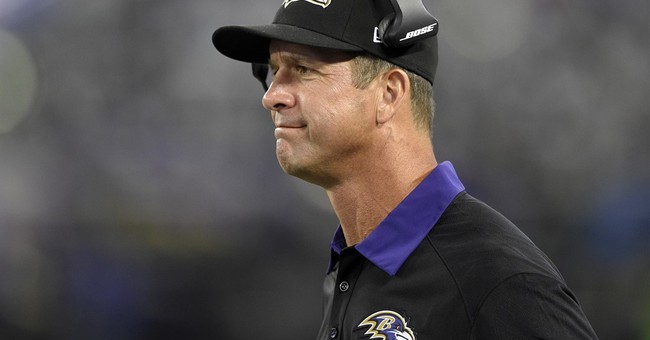 A Super Bowl championship might seem to be the crowning achievement in the life of a football coach but sometimes laudable leadership can be found in the midst of a crisis when wins and losses at that moment pale in comparison to life and death.

Such a juncture occurred recently when John Harbaugh, the coach of the Baltimore Ravens who led them to a world championship in 2012, endured a sleepless night after learning that 23-year-old Tray Walker, a promising defensive back on his team, was critically injured while riding a dirt bike that collided with an SUV in Liberty City, Florida. Harbaugh tried to provide guidance to his team the next morning by drafting an open letter to them, while sharing that he viewed each of them as a son and wanted to provide them with fatherly advice to use good judgment and to live each day with purpose.

Later on during the same the day the open letter was sent, Walker died. The shocking death of someone who is young, powerful and seemingly on a path to a bright future is among the most difficult to fathom.

Walker’s family, teammates, coaches and others who had hoped to see his immense talent carry him to a successful career in the National Football League (NFL) and, more importantly, a fulfilling life, only could support each other in the days before, during and after the funeral.

But Harbaugh’s open letter offers a powerful plea to not squander a single day of life or make decisions that needlessly put any of us at heightened risk.

With the off season upon the Ravens and the rest of the NFL, Harbaugh’s letter began by sharing with his players about the phone call informing him of Walker’s critical injuries. Harbaugh expressed that such news is what no one ever wants to receive as a coach, as a parent, as a brother or as a friend.

“This shook me and all of us,” Harbaugh shared. “Like some of you, I haven’t been able to rest since hearing the news late last night.”

The coach continued, “As I focused about Tray this morning, some thoughts came to mind that I wanted to share. What would I say to my own son, if I had a son, in a situation like this? You guys are that important to me.

“This is what I would be saying to you in the team meeting room if we were together today: There is a lot going on out there and you are going to be involved in tough and difficult situations. You are making and will continue to make important choices pretty much every day. That’s okay. That’s our reality. It can even be very good to be put in different circumstances. To make it right, you are going to have to grow up fast. Probably faster than many of your friends and family.”

The coach then offered the following advice that goes well beyond the realm of football:

Lead in your home. Take care of your family and yourself every single day. Think about who you are and where you are going, and what you stand for. Look after one another. Only then can you be your most effective on the job and in every area of your life.

Please consider your actions and choices. There are always consequences. Choose who you allow to advise you. Consider the quality of the counsel you take. Put yourself in positions to succeed. Turn away from unnecessary and risky behavior. Take care of your physical well-being. Live a healthy lifestyle. Pursue those things that make you better. Rest well. Eat well. Laugh with those who you love and love you. Fulfill your obligations effectively.

Be your own best friend. Do not be an enemy onto yourself. Turn away from trouble and harm. Walk away from foolish behavior. Ignore silly and unwise advice – you’ll know it when you see it.

Get to know those people in your life who manage to walk free from the weight of self-created obstacles. Get close to those who have gone where you want to go, and have accomplished what you want to accomplish. Grow spiritually. Think about what and who you want to become.

Coach Harbaugh followed those tips for living with the following reminder that life itself is worth preserving and protecting.

“I am asking you to consider what is at stake in your life,” Coach Harbaugh cautioned. “Consider what your thoughts, actions and choices mean to those around you. Live your life fully and with purpose. Have fun and share your happiness. Find your faith, and allow God to grow your faith.”

He then finished with motivational words to encourage a sense of responsibility and community that would be appropriate for just about any group of men.

“Let’s look out for one another,” Harbaugh concluded. “Be a great brother and friend. Inquire. Listen. Ask. Investigate. Reach out. Be there. Take a step. Go for it.”

Leadership may seem easy when a coach wins a Super Bowl, hoists the Lombardi Trophy aloft with his team and basks in the adulation of a society that gives homage to gridiron success. But just as the trophy itself is named for the late Vince Lombardi, a championship coach of deep faith, another coach who suffered a loss more costly than any that could be endured on a playing field offered guidance that should long endure.