Paul Dykewicz
|
Posted: Mar 25, 2016 12:01 AM
Share   Tweet
The opinions expressed by columnists are their own and do not necessarily represent the views of Townhall.com. 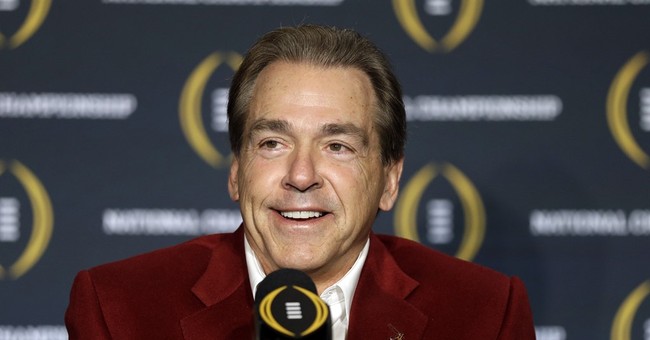 The value of a sports chaplain may appear elusive to many observers but not to the University of Alabama’s national championship-winning football coach Nick Saban.

Fr. Gerald Holloway, associate pastor of Prince of Peace Church in Hoover, Alabama, has served as the football chaplain at the University of Alabama for the past 13 years and quietly gained the distinction of tying the University of Notre Dame’s late sports chaplain, Fr. James Riehle, with four national football titles. But a chaplain’s contributions to a football team go beyond what might appear on the surface, despite naysayers who claim such a spiritual presence has no place at a public institution, even if participation religious services or prayers is strictly optional.

Fr. Holloway originally became the team’s spiritual leader in 2003 when former Alabama football coach Mike Shula attended Mass on campus each day upon taking the helm of the team and the sports-loving priest told his high-profile congregant that he needed a chaplain. Coach Shula responded that he’d get back to Fr. Holloway, who said he had doubts anything would come of the conversation until a day or so later when the priest said he received a phone call that his offer to fulfill that role had been accepted.

Even though Fr. Holloway stopped playing football in the ninth grade, he said he loves the game, enjoys serving as chaplain and performing the roles of leading the team’s weekly Mass and the pre-game and post-game prayers. Mass attendance is “voluntary” and the service is open to anyone involved with the team who wants to come, Fr. Holloway said. The Mass, which attracts “mostly Catholic players,” is held Friday night when a Saturday game starts at 11 a.m. or the morning of the contest when it is scheduled for 2 p.m. or later, he added.

The priest also has been able to receive and carry out requests for prayers and one-on-one counseling with some of the student-athletes. In one instance, a student attending morning Mass approached Fr. Holloway and asked him to pray for a “special intention.”

Only later did Fr. Holloway learn when the student’s father called to thank him that the intention was for his son to earn a spot on the Alabama football team as a walk-on player. Fr. Holloway did not recall the student playing in a game but the young man practiced with the team and never sustained an injury.

Fr. Holloway chuckled when remembering a telephone call he received from the student’s grandmother. She expressed concern about whether her grandson actually was “big enough” to play college football.

“Well, he made the team,” Fr. Holloway told her. The coach apparently answered the question for the grandmother with his decision to give her grandson a spot on the roster.

Another aspiring Catholic football player arrived at Alabama without a scholarship and asked Fr. Holloway to pray for him. That student also made the team and eventually developed into a starting defensive lineman who led Alabama in quarterback sacks and tackles for loss three times during his four years of college football. The student, Wallace Gilberry, left Alabama second all-time in tackles behind the line of scrimmage with 60.5 and finished fifth on the Crimson Tide's all-time quarterback sack list with 21.5.

Gilberry exhibited the same kind of determination in the National Football League, where he just finished his ninth season. He most recently played for the Cincinnati Bengals, after earlier stints with the Kansas City Chiefs and the Tampa Bay Buccaneers.

Fr. Holloway said some student-athletes have spent time talking to him as they try to adjust to the demands of school and playing on the football team. Those conversations are less likely to occur on a regular basis after Fr. Holloway’s transfer before last season to the Prince of Peace parish more than an hour drive away in Hoover, Alabama, from St. Francis of Assisi, the parish on the Tuscaloosa campus that serves students and others affiliated with the university.

However, Fr. John Fallon, the pastor of Prince of Peace that counts 2,400 families among its parishioners, is an avid “Bama fan” who Fr. Holloway said helped make it possible for him to continue his role as the Alabama football team chaplain last season. The Crimson Tide won its fourth national title on January 11, 2016, in just the past nine seasons with Saban as its coach and Fr. Holloway as its team chaplain. Fr. Holloway expressed hope he can maintain his service to the team, if possible, despite the distance of his latest parish assignment.

Alabama’s football coach Nick Saban has been a consistent Sunday churchgoer at the campus parish since his 2007 arrival at Alabama, joining roughly 800 families and 800 to 900 students who regularly attended Mass there on Sunday, Fr. Holloway said.  In fact, Coach Saban, who typically attends the 9 a.m. service that Alabama alumni began calling “Nick at Nine,” helped with fundraising efforts to build a new, larger campus church to accommodate a growing number of parishioners, Fr. Holloway said.

“It has been a tremendous blessing for me to be a part of the football team,” said Fr. Holloway, who added he attempts to offer motivational words during his pre-game Mass homilies and prayers. He added that he tries to help the student-athletes grow personally and develop into productive citizens.

In an era when too many young people are misguided into engaging in terrorism, criminal activity or the abuse of drugs, the presence of a clergyman for student-athletes on the national title-winning football team at the University of Alabama seems to be producing victories on and off the playing field.