The Real Reasons Africa Has Another Locust Plague

Paul Driessen
|
Posted: Mar 21, 2020 12:01 AM
Share   Tweet
The opinions expressed by columnists are their own and do not necessarily represent the views of Townhall.com. 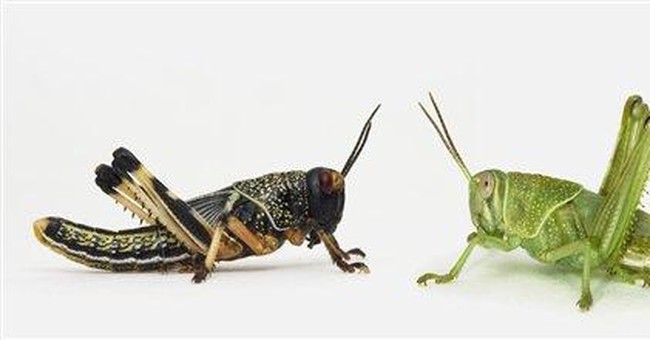 The China coronavirus and COVID-19 outbreaks, deaths and responses continue to dominate US, European and Asian news. Meanwhile, an equally or even more serious infestation is devastating East African crops and leaving tens of millions at risk of starvation and death. If COVID hits these weakened populations, amid their malaria and other systemic diseases, it would bring tragedy on massive scales.

“Across Somalia, desert locusts in a swarm the size of Manhattan have destroyed a swath of farmland as big as Oklahoma,” the Wall Street Journal’s Nicholas Bariyo reports. “In Kenya, billions-strong clouds of the insects have eaten through 800 square miles of crops and survived a weeks-long spraying campaign. They have “swept across more than 10 nations on two continents.” In parts of East Africa they “are destroying some 1.8 million metric tons of vegetation every day, enough food to feed 81 million people.”

East Africa has a Desert Locust Control Organization. But it, the region and the individual countries were totally unprepared for the onslaught: unaware the hordes were coming, grotesquely underfunded, with almost no pesticides or aircraft to spray them. By the time they acted, it was far too little, far too late.

The massive swarms are hardly unprecedented. Locusts “covered the face of the whole earth, so that the land was darkened; and they ate every herb of the land and all the fruit of the trees which the hail had left. So there remained nothing green on the trees or on the plants of the field throughout all the land of Egypt.” [Exodus 10:15] They pillaged long before that, and have returned hundreds of times since.

The 1986-87 plague was truly calamitous. As the late entomologist Dr. J. Gordon Edwards noted in 1988, four major locust species hatched simultaneously in 15 countries, and the crop devastation was so massive that the UN Food and Agricultural Organization predicted 50 million Africans and Asians might starve to death. Malnourished survivors would suffer reduced mental capacity and have greater susceptibility to diseases. Other near-biblical infestations followed, with predictable regularity and results.

The obvious, burning, essential question is this: In this era of amazing modern agriculture, aviation and pest control technologies, how could Africa have reached this frightening precipice yet again?

These 2019-2020 swarms originated in the vast deserts of Oman, Somalia and Yemen, parts of which are lawless and war-torn. That made it difficult and dangerous to monitor them for the emergence of billions of “hoppers,” following tumultuous downpours two years ago – or to spray them with insecticides when they were most vulnerable, before they grew wings and could fly hours on end, thousands of miles. But it also means East African countries needed to work together, despite these obstacles, to prevent this plague.

These are horrifically poor countries, where bureaucrats live relatively well largely on outside donor funds, often corrupt top-gun politicians live very well on the same money, and some 90% of the people exist on a few dollars a day, on the edge of starvation and debilitating disease, tilling tiny patches of land.

Too often their governments’ ability to plan for recurring crises like this is minimal, their priorities are skewed to whatever the donors want, and funding for insect control is minimal at best. Eritrea, Somalia, Sudan and Uganda didn’t even pay their Locust Control membership dues for years, or decades – much less acquire the aircraft and pesticides they would need for the inevitable next locust plague. Their focus was on elections (getting reelected), essential or just showy infrastructure projects, and climate change.

Indeed, it seems nothing will be allowed to get in the way of the UN, EU and environmentalist obsession with climate change as the single greatest threat facing humanity and planet. The real cataclysms exist in models and headlines, are decades away, are hardly unprecedented for East Africa, and can hardly be worse than these recurring locust cataclysms. But UN, EU, World Bank and eco-centered foundation money drives the agenda and pays Africa’s leaders and bureaucrats. So recurring real-world crises get short shrift.

When it comes to insect control, the driving force is aid money totally skewed to agro-ecology and its ideological focus on “food sovereignty” and “traditional subsistence farming,” with wood plows and oxen, “in harmony with nature,” free from Western seeds, fertilizers, tractors and, above all, pesticides.

It’s a clever new moniker, but the ideology and donor-driven attitudes are nothing new. Dr. Edwards documented them in his 1988 article. The FAO, USAID, USEPA, World Bank, Environmental Defense Fund and other organizations were pushing “all-natural, biological, integrated pest management” practices back then, too. They were totally opposed to the use of dieldrin and other insecticides that actually work.

Just as today, their focus back then was on alleged, possible side effects of modern insecticides, which used properly by trained applicators are safe for people, livestock, wildlife and most non-target insects. The key is having the necessary staff, equipment and chemicals ahead of time. Pressured by all these external forces, East Africa failed to do that – and now it is reaping the proverbial whirlwind.

The donor agencies and pressure groups’ attitude is akin to demands that chemotherapy for cancer be banned, because the chemicals impair patient’s immune systems and cause hair to fall out. Saving their lives is inarguably far more important than these side effects – just as saving millions from starvation and associated diseases, and preventing total crop and habitat loss, is inarguably far more important than the temporary loss of some insects or even slight risks to cattle, wildlife or people from the sprays.

(An upcoming article will document who is behind the eco-manslaughter today, and who is funding them: from US, EU and UN organizations to their Swiss, Swedish, pseudo-African and other counterparts.)

Back in 1987, Dr. Edwards noted, Senegal requested and received the loan of four American DC-7 transport aircraft that could hold 18,400 pounds of cargo (8.4 metric tons). They sprayed two million acres and killed 95% of that country’s immature locusts. But elsewhere FAO anti-pesticide ideologies prevailed, and billions of locusts matured, flew off, mated and produced tens of billions of locusts the following year. They destroyed croplands, wildlife habitats, communities and lives in a dozen other African countries.

But they didn’t get the hoppers. They waited until swarms the size of Manhattan were upon them. Against those countless billions of voracious locusts, ground-based equipment is useless. A dozen small crop dusters make almost no difference. And traditional methods like banging on pots are a sick joke.

However, there could still be hope. A single Lockheed KC-130 Hercules tanker plane equipped with Modular Aerial Spray Systems can spray up to 150,000 acres a day. Each plane can carry 2,000 gallons of the most appropriate pesticide-water mixture. The benefits would be immediate and tremendous.

President Trump could order the Air Force to provide a KC-130 or two and enough fenitrothion, Lorsban or other effective insecticides for a few weeks of locust-eradication spraying. He could save millions of lives – and change attitudes, policies and practices across Africa and the world.

The president could also direct his US Agency for International Development (USAID), State Department and other agencies to steer their funding and efforts away from agro-ecology, and toward making the East Africa Desert Locust Control Organization the forward-thinking, effective operation it was meant to be.

He could have frank discussions with the heads of EU nations, regarding their agro-ecology, anti-pesticide and anti-biotechnology policies, funding practices and import restrictions toward Africa. Finally, he could direct the Treasury Department and Internal Revenue Service to review (and terminate) the tax-exempt status of organizations and foundations engaged in lethal eco-imperialistic practices and pressure campaigns in Africa, Asia and South America.

The locust plagues, starvation and deaths from readily preventable diseases like malaria must end – now.

Paul Driessen is senior policy advisor for the Committee For A Constructive Tomorrow and author of Eco-Imperialism: Green power-black death, and articles on environmental and human rights issues.