Paul Driessen
|
Posted: Nov 08, 2018 12:01 AM
Share   Tweet
The opinions expressed by columnists are their own and do not necessarily represent the views of Townhall.com. 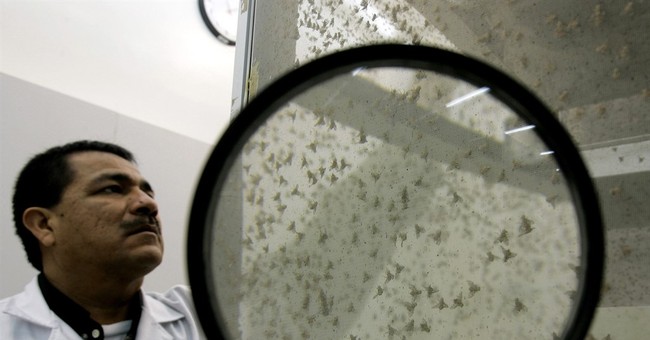 Editor's note: This column was co-authored by Dr. Jay Lehr

The 2018 elections underscore the need for bipartisan efforts to address scientific frauds that promote and justify ever more stringent regulations – often to the great detriment of people, patients and society.

In fact, world-renowned toxicology expert Dr. Edward Calabrese has now discovered and documented fraud behind the award of the 1946 Nobel Prize for Physiology or Medicine. The prize was given to Hermann Muller for his claimed discovery that even small or infinitesimal amounts of radiation can cause cancer. It is the ridiculous assertion that there is no threshold below which any kind of radiation is safe.

By contrast, toxicologists have long used actual experiments to establish a dose response model and determine what exposure to various kinds of radiation (or chemicals) actually pose cancer (or other risks) risks for humans.

Low doses are generally benign, they have found. In many cases, they even help animals and humans ward off disease, safeguard bodies against certain chemicals or diseases, or actually cure cancer and other diseases. Higher doses can cause problems, and therefore must be calculated and regulated.

For example, via a process called hormesis, low levels of radon exposure can protect against cancer; 80 milligrams of aspirin are thought to prevent strokes; and trace amounts of selenium help our bodies counteract the harmful effects of mercury in our blood.

However, despite this evidence, government agencies like the U.S. Environmental Protection Agency have followed Muller’s straight-line Linear No Threshold (LNT) model for decades. Besides giving rise to what many say are overly restrictive and even unnecessary regulations, the LNT model has actually harmed patients, by greatly precluding the use of radiation in curative medicine.

But now University of Massachusetts at Amherst health sciences professor Calabrese has documented LNT fraud through an exhaustive review of communications that began July 22, 1927 in the journal Science, where Muller first put forth the claim that any amount of radiation causes cancer. Calabrese lays out his findings in an October 2018 paper in the Philosophy, Ethics and Humanities in Medicine journal.

Calabrese has spent years investigating Muller’s claims. His story unfolds like a detective novel with all the characters who played intentional or inadvertent roles in the deception indicted by their written and published communications 90 years ago. There are 34 documents in all.

They show that, without any supporting scientific data or peer review, Muller presented his claims at the Fifth International Genetics Congress in September 1927, where he described how he had supposedly induced hundreds of gene mutations by bombarding common fruit flies (Drosophila) with x-rays.

Muller’s closest friend and colleague, William Rice Institute biologist Edgar Altenburg, told Muller his experiment had not caused any mutations. Instead, they created changes by eliminating pieces of the flies’ chromosomes, enabling the creation of inheritable traits or progeny, but no mutations whatever.

As early as 1929, in a paper in the Journal of Genetics, geneticist Barbara McClintock demonstrated that Altenburg’s criticism of Muller were correct. She went on to win the 1983 Nobel Prize for her other work in genetics.

However, Muller repeatedly brushed off his friends’ advisories about his error and McClintock’s proof that his hypothesis was incorrect. The recriminations may have led to Muller’s failed suicide attempt in 1932. His suicide note was directed to Altenburg, rather than his family, and Altenburg never challenged Muller again. It appears that loyalty to a close friend may have overwhelmed his responsibility to science, medicine and humanity.

The scientific community was enthralled by Muller’s claims and the publicity it received. Scientists worldwide quickly and uncritically came to believe that Muller actually had produced gene mutations and was advancing one of the most significant questions confronting biology. His lack of data never slowed down the wave of excitement.

Muller resumed his duplicity quite strongly throughout the years leading to his Nobel Prize lecture on December 12, 1946. There he deliberately deceived the audience by arguing that there was no possibility of a threshold or harmless dose response for radiation-induced mutations.

Calabrese documents that Muller had seen data that supported exactly that conclusion. It came from two scientists, Ernst Caspari and Curt Stern, who worked at the University of Rochester and released their findings one month prior to Muller’s Nobel Lecture. Muller ignored their findings and promoted his deception to support his long-held commitment to his Linear No Threshold claim, which is commonly referred to as LNT dose response for mutation and cancer risks.

Muller’s story is one of unbridled ambition, self-serving manipulation, a scientific community that at many levels failed to demand accountability, and a Nobel Prize committee that inadequately evaluated the findings which led to the award. The implications of these actions have been incredibly damaging.

They resulted in the U.S. National Academy of Sciences adopting the LNT in 1956 for all regulatory programs relating to radiation. This convention was subsequently adopted worldwide.

The deceptions facilitated a continuing impact on society that continues to the present day, without any acknowledgement or change by the scientific community or government regulatory agencies.

In addition, the 2011 Fukushima nuclear disaster was exacerbated by a commitment to the LNT, which persuaded the Japanese government to mandate that people be moved unnecessarily miles from their homes. That led to an estimated 1,600 premature elderly deaths due to stress.

Not a single radiation illness or death occurred, because there was never enough radiation lasting long enough in the prevailing winds to cause either. But the Fukushima fear lasted for years afterward.

Most amazing and distressing of all, they have led to the rejection of low-dose radiation (LDR) treatments. Underscoring how devastating this can be for patients, Dr. Kiyohiko Sakamoto gave himself half-body LDR treatments for his systemic stage IV colon cancer. Thus far, he is a 20+ year survivor!

In his landmark paper, Calabrese says, regardless of Muller’s deceit, “the most significant criticisms and concerns should be directed to the scientific and regulatory communities, such as U.S. EPA, that have uncritically adopted and sustained Muller’s findings as the foundation for cancer risk assessment.”

They have permitted this process to be dominated by ideological perspectives that must end if healthcare is to be optimized by using low dose radiation to arrest or cure cancers, and prevent needless deaths.

The reasons behind this travesty of science and medicine are simple. First, prominent scientists do not like to be found incorrect on major issues. Second, an activist anti-nuclear population views all radiation as evil, whether that view is rational, irrational or actually harmful to people’s health and welfare.

Hopefully, a “refreshed” House of Representatives and stronger Republican Senate will team up with the White House to correct an egregious wrong that has negatively impacted the health of cancer victims and others who most need advanced radiation treatments that have too long been rendered unavailable.

Any LNT changes will likely be resisted by environmental and health activists and others committed to the status quo. However, Congress, EPA, the Food and Drug Administration, and other regulatory bodies worldwide need to reexamine and revise existing LNT rules. Countless lives hang in the balance.

Paul Driessen is policy advisor for the Committee For A Constructive Tomorrow and author of articles and books on natural resource issues. Dr. Jay Lehr is science director for The Heartland Institute of Arlington Heights, Illinois.