Paul Driessen
|
Posted: Aug 13, 2018 12:01 AM
Share   Tweet
The opinions expressed by columnists are their own and do not necessarily represent the views of Townhall.com. 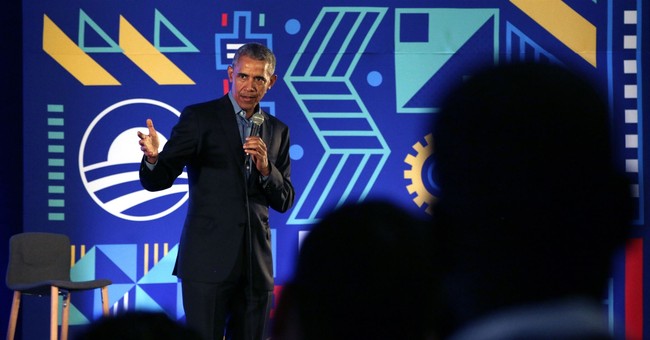 Part 2 of a 3-part series explaining how the U.S. Agency for International Development continues to use climate change, sustainability, subsistence farming and other Green fads to justify lethal Obama era anti-development policies that have disturbingly racist impacts

These Obama era anti-fossil-fuel, anti-development, anti-people policies are cloaked in lofty virtue-signaling language. But examined honestly and completely, they fail every humanitarian test.

USAID’s “Low Emission Development Strategies” do not “forge” partnerships with poor countries. They force (impose) partnerships that provide “climate mitigation,” “sustainable development” and renewable energy funding … which ends up primarily in the bank accounts of ruling elites in those nations.

The lives of impoverished families improve little, if at all. Above all, they get virtually no electricity that is reliable, affordable or plentiful enough to operate even small furniture making shops – much less establish and sustain modern communities and societies with roads, hospitals, schools and other infrastructure, including sanitation, clean water, indoor plumbing or even homes with window screens.

These families are not threatened by climate and weather fluctuations that are different from or more severe than what they have confronted and survived numerous times throughout their history. They are threatened by climate alarmist policies that keep them impoverished, diseased and malnourished – with few or no prospects for having the living standards, health and longevity they dream of – and most Americans view almost as their birthright.

USAID policies leave these families vulnerable to the extreme weather they have always confronted. They “protect” against minor climate changes like those they have faced throughout history – and against “dire” future climate and weather threats that exist only in GIGO computer model“ projections.”

“Low emission growth” and “clean economic growth” are just code words for low economic growth and permanent poverty and misery. The terms could, of course, include hydroelectric and nuclear power, but rabid environmentalists opposed that, as well, and USAID does not support such energy projects.

It’s no wonder poor countries are angry about foreign aid that attaches so many anti-development strings. They increasingly point to China, Germany, Britain, Russia, the USA and other wealthy nations that are embracing coal and natural gas to fuel economic recoveries, exporting fossil fuels to rich and poor nations alike, and ending wind and solar subsidies. Pakistan, Poland and other poor countries are saying, “Why shouldn’t we produce and use the reliable, affordable fossil fuels that we need and have in abundance?”

(Meanwhile, once über-green Germany’s wind and solar sectors are imploding, causing numerous layoffs in those sectors, but likely creating jobs in industries that were pummeled by 38-cents/kWh electricity.)

Many of these countries have turned to China for financial and technological assistance because the USAID, EU and anti-development banks won’t help them. In fact, some1,600 coal-fired power plants are planned or under construction in 62 countries; China alone is financing and/or building 700 of them, many in the Middle Kingdom, but many in other Asian or African countries.

Self-described “civil society” groups now claim to be “concerned” about this Chinese assistance.

Indeed, the best way to ensure “climate resilience” is to have strong economies, modern technologies, early warning systems, and modern infrastructures that are built to withstand nature’s onslaughts.

But the pollution, CO2 emissions, and other impacts are in somebody else’s backyard. So it’s OK.

However, the USAID Climate Strategy doesn’t just oppose fossil fuels for generating electricity. Under the benign sounding terminology of “preserving landscapes,” it also opposes “deforestation” – clearing land for farming. (This makes the USAID the ultimate Agenda 21 land use arbiter.)

“Deforestation” is a major offense in “manmade climate chaos” circles because, they say, it eliminates “carbon sinks” and produces greenhouse gases. The fact that people in poor countries also turn forests into firewood and charcoal – because they don’t have coal, natural gas or electricity – escapes them.

Even crazier, under extremist “Agro-Ecology” principles, “environmentally conscious” activists and bureaucrats oppose the use of hybrid and genetically engineered crops, chemical fertilizers and insecticides, even tractors and other machinery. These policies reduce crop yields per acre, require that more land be cultivated to feed people and demand far more back-breaking, dawn-to-dusk labor.

But apparently, there is no climate or ecological problem if large forest areas are cut down for wind farms, solar panels or canola, corn (maize) ethanol and soy biofuel plantations. Or if thousands of acres of forest habitats are converted into wood pellets for electricity generation in Britain, to reduce coal burning.

In fact, American and Canadian companies are cutting down thousands of acres of forest habitats and turning millions of trees into wood pellets, which they then truck to coastal ports and transport on oil-fueled cargo ships to England. There the pellets are hauled by train to the Drax Power Plant and burned to generate electricity, so the UK can meet its renewable fuel, climate, and sustainability targets!

That way, Britain avoids burning coal and doesn’t even have to burn natural gas that it actually has in abundance but has thus far taken only a few baby steps to develop via fracking.

So when USAID says its policies ensure “more stable and prosperous futures” for its “partners” and creating “new markets for clean technology and expansion of the green economy” – what it really means is that the agency is improving the bottom line for members of the climate and renewable energy cabal, at the enormous expense of nearly everyone else, especially dark-skinned Third World families.

Paul Driessen is senior policy analyst for the Committee For A Constructive Tomorrow and author of-Imperialism: Green Power - Black Death and other books and articles on energy, climate change and economic development. David Wojick is an independent analyst specializing in science, logic and human rights in public policy, and author of numerous articles on these topics.

Part 3 will show how these USAID policies perpetuate subsistence farming, malnutrition and disease in poor countries – and what Congress and the White House must do to end these travesties.