Paul Driessen
|
Posted: Jul 23, 2016 12:01 AM
Share   Tweet
The opinions expressed by columnists are their own and do not necessarily represent the views of Townhall.com. 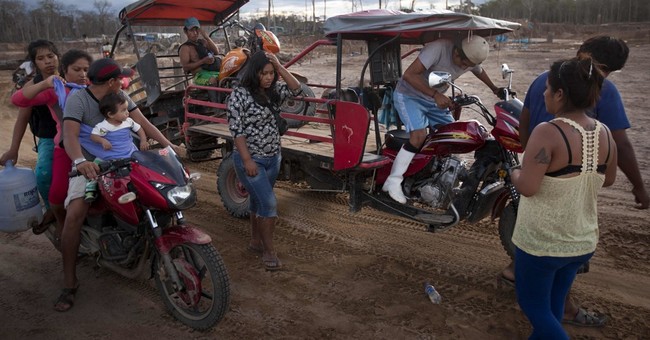 We are just now entering the age of industrialization, newly elected President Rodrigo Duterte said recently, explaining why the Philippines will not ratify the Paris climate accords. “Now that we’re developing, you will impose a limit? That’s absurd. It’s being imposed upon us by the industrialized countries. They think they can dictate our destiny.”

More developing nations are taking the same stance – and rightly so. They increasingly understand that fossil fuels are needed to modernize, industrialize, and decrease poverty, malnutrition and disease. Many supported the 2015 Paris climate treaty for three reasons.

They are not required to reduce their oil, natural gas and coal use, economic development and greenhouse gas emissions, because doing so would prevent them from improving their people’s living standards.

They want the free technology transfers and trillions of dollars in climate “adaptation, mitigation and reparation” funds that now-wealthy nations promised to pay for alleged climate transgressions. But they now know those promises won’t be kept – especially by countries that absurdly insist on slashing their energy use, economic growth and job creation, while developing countries surge ahead.

Climate has always changed. It is far better to have energy, technology, modern housing and wealth to adapt to, survive, recover from and even thrive amid inevitable warming, cooling and weather events, than to forego these abilities (on the absurd assumption that humans can control climate and weather) – and be forced to confront nature’s onslaughts the way previous generations had to.

The November 7-18 Marrakech, Morocco UN climate conference (COP-22) thus promises to be a lot of hot air, just like its predecessors. Officially, its goal is to accelerate GHG emission reductions, “brainstorm” with government and business leaders to achieve “new levels of cooperation and technology sharing” (and subsidies), and embrace “urgent action” to help African and small island nations survive the supposed ravages of manmade droughts and rising seas.

The true purposes are to pressure industrialized nations to end most fossil fuel use by 2050; intentionally replace free enterprise capitalism with a “more equitable” system; “more fairly” redistribute the world’s wealth and natural resources; and ensure that poor countries develop “sustainably” and not “too much” – all under the direction and control of UN agencies and environmentalist pressure groups.

We might ask: Replace capitalism with what exactly? Dictatorial UN socialism? Redistribute what wealth exactly? After we’ve hobbled developed countries’ energy use, job creation and wealth creation, what will be left? As poor countries get rich, do you UN bureaucrats intend to take and redistribute their wealth to “less fortunate” nations that still fail to use fossil fuels or get rid of their kleptocratic leaders?

Africans are not endangered by manmade climate change. They are threatened by the same droughts and storms they have confronted for millennia, and by the same corrupt leaders who line their own pockets with climate and foreign aid cash, while doing nothing for their people and nothing to modernize their countries. Africa certainly does not need yet more callous corruption dictating its future.

Pacific islanders likewise face no greater perils from seas rising at seven inches per century, than they have from seas that rose 400 feet since the last Ice Age glaciers melted, and their coral islands kept pace with those ocean levels – unless they too fail to use fossil fuel (and nuclear) power to modernize.

The Morocco-Paris-Bali-Rio manmade climate chaos mantra may protect people and planet from climate hobgoblins conjured up by garbage in-garbage out computer models. But it will perpetuate energy and economic poverty, imposed on powerless populations by eco-imperialist US, EU and UN functionaries.

Virtually every other environmentalist dogma has similar effects.

Sustainability precepts demand that we somehow predict future technologies – and ensure that today’s resource needs “will not compromise” the completely unpredictable energy and raw material needs that those unpredictable technologies will introduce. They require that we safeguard the assumed needs of future generations, even when it means ignoring or compromising the needs of currentgenerations – including the needs, aspirations, health and welfare of the world’s poorest people.

Resource depletion claims routinely fail to account for hydraulic fracturing and other new technologies that increase energy and mineral supplies, reduce their costs – or decrease the need for previously essential commodities, as fiber optic cables reduced the need for copper.

Precautionary principles say we must focus on the risks of using chemicals, fossil fuels and other technologies – but never on the risks of not using them. We are required to emphasize minor, alleged, manageable, exaggerated or fabricated risks that a technology might cause, but ignore the risks it would reduce or prevent.

Because of illusory risks from biotechnology, we are to banish GMO Golden Rice and bananas that are rich in beta-carotene (which humans can convert into Vitamin A), and continue letting millions of children go blind or die. We are to accept millions more deaths from malaria, Zika, dengue, yellow fever and other diseases, because of imagined dangers of using DDT and insecticides. Must we also accept millions of cancer deaths, because of risks associated with radiation and chemo therapies?

Over the past three decades, fossil fuels helped 1.3 billion more people get electricity and escape deadly energy and economic poverty – over 830 million because of coal. China connected 99% of its population to the grid, also mostly with coal, enabling its average citizens to be ten times richer and live 32 years longer than five decades previously.

But another 1.2 billion people (the US, Canadian, Mexican and European populations combined) still do not have electricity. Another 2 billion have electrical power only sporadically and unpredictably and must still cook and heat with wood, charcoal and animal dung. Hundreds of millions get horribly sick and five million die every year from lung and intestinal diseases, due to breathing smoke from open fires and not having refrigeration, clean water and safe food. Because of climate “risks,” we are to let this continue.

Of course, as a young black California mother reminded me a few years ago, eco-imperialism is not just a developing country issue. It is a global problem. “Because of their paranoid fear of sprawl,” LaTonya told me, “elitist eco-imperialists employ endless regulations and restrictions that prevent upwardly-mobile people of color from improving their lot in life. Only we, the wealthy and privileged, they seem to insist, can live in nice homes and safe neighborhoods, have good jobs and enjoy modern lifestyles.”

These attitudes, mantras, ideologies and policies are callous, immoral, eco-imperialistic and genocidal. They inflict unconscionable crimes against humanity on the poorest among us. They must no longer be tolerated.

Instead of holding poor nations and billions of less fortunate people back still more decades, we are ethically bound to do everything we can to encourage and assist them to throw off their shackles, and join us among the world’s wealthy, healthy, technologically advanced nations.