Paul Driessen
|
Posted: Feb 06, 2016 12:01 AM
Share   Tweet
The opinions expressed by columnists are their own and do not necessarily represent the views of Townhall.com. 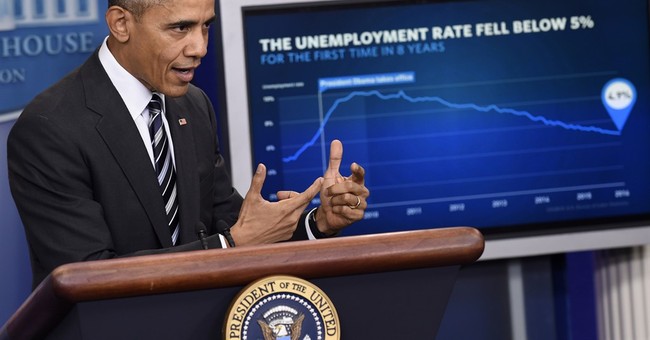 America’s abysmal 0.7% economic growth during the fourth quarter of 2015 meant the annual growth rate was an anemic 2.4% … and average annual growth for the six-year Obama era a pathetic 2.2 percent.

This is “dead last compared to six other recession recoveries since 1960,” Heritage Foundation economist Stephen Moore points out. They averaged a robust 4.0% while the Reagan era recovery averaged a “sizzling” 4.8% over six years. That means the Obama recovery lost $1.8 trillion (in constant 2009 money) that would have been pumped into the economy under an average recovery, and$2.8 trillion under a Reagan-style rebound, Moore says, citing a congressional Joint Economic Committee analysis.

But job growth is “strong,” the White House insists, averaging 280,000 each of the last three months of 2015 (and a mere 151,000 last month). This deceptive claim hides the fact that 94 million Americans over age 16 are not working. The horrid 62.6% labor force participation rate remains the worst in decades.

While the official jobless rate is 5.0% the real one is 10% or higher, since the official rate ignores those who have given up looking and dropped out of the analysis – or have entered the cash only, barter, pay-little-income-tax economy. Moreover, jobless rates for black and Hispanic Americans are much higher. The Wall Street Journal’s Dan Henninger notes that black unemployment is 9% in Texas, 12% in South Carolina, and 13% in Arkansas, again not counting those too demoralized to look for work.

What has gone wrong with the American economy and job-creating machine?

First of all, the Obama Administration has deliberately destroyed tens of thousands of jobs in the name of preventing “dangerous manmade climate change” and “fundamentally transforming” our energy, economic, social and legal systems – via its war on coal, oil, natural gas, manufacturing, and the vast majority of economic activities on government controlled lands in the western states and Alaska.

Entire communities, states and regions are being hammered. If these policies continue, millions more Americans will lose their jobs in the next few years.

Second, government has simply gotten much too big, powerful and unaccountable – at the local and state level, and especially at the federal level. It is not coincidental that five of the ten wealthiest counties in the United States are in the Washington, DC area. Members of Congress and 20% of federal bureaucrats earn well into six-figure incomes, while many lawyers and lobbyists working the legislative and regulatory hallways and back rooms earn millions annually.

According to carefully nurtured mythology, our “public servants” are more knowledgeable and altruistic than almost anyone in the private sector; and they are dedicated to finding and punishing miscreants who would routinely rob, cheat and pollute if it weren’t for the lawmakers and regulators. It does happen. But IRS, VA, EPA, Benghazi, Gold King, Flint, Michigan and countless other examples dramatize how false this narrative is – as do multiple studies by Congress, Ron Arnold, E&E Legal, myself and many others.

In far too many cases, the president and his regulators are arrogant, incompetent, negligent, abusive and vindictive. While they still employ the formal regulatory process (draft rules, comment periods, reviews and final rulemaking), they increasingly avoid it via executive orders, guidance memos, informal bulletins and other tactics that have equally effective regulatory impact. They also use investigations, tax exemption denials, tax audits, warning letters, land and property seizures, and selective arrests, fines and prosecutions, to compel businesses, nonprofits, political groups and individuals to kowtow to them.

Government agencies and officials routinely coordinate or collude with activist groups to develop and promote policies and regulations, often employing secret personal email accounts, off-site meetings that avoid transparency, and million-dollar payments to activists who rubberstamp and promote the rules. They exaggerate and manipulate data and studies to justify policies and regulations, while demanding larger budgets, more personnel, more power to control our lives, livelihoods and business operations.

And yet even shady, incompetent or blatantly illegal actions are shielded by colleagues, judges, laws, politicians and the media from any accountability, liability or penalty. And policies and rules arising from these questionable to illegal means are rarely overturned by the courts.

Large corporations and wealthy individuals can often survive, even thrive, under these conditions – especially if they secure mandates, subsidies and government-guaranteed loans for their products. They also use laws, regulations and bureaucracies to stifle competition. Small businesses cannot even read the mountains of laws and regulations, much less comprehend them or know they are in compliance.

* The Tax Code is 74,000 pages and 33 million words long, counting important cases and interpretations. America’s 35% corporate tax rate is the highest among all developed countries.

* The Code of Federal Regulations is 175,000 pages long and coupled with more than 1.4 million pages of ten-point-type Federal Register proposed and final rules published just since 1993.

* The 2015 Federal Register contained a record 81,611 pages. The 2016 FR will likely be even longer, as some 60 federal departments, agencies and commissions have more than 3,000 regulations in the pipeline, to implement and impose every remaining item on the Obama agenda.

* Over 4,450 federal crimes are embedded in those laws and regulations – and neither an inability to understand the complex edicts nor an absence of intent to violate them is a defense.

* Complying with all these regulations costs American businesses and families $1.9 trillion per year. That’s one-tenth of the nation’s Gross Domestic Product – $5,900 a year for every American citizen.

* EPA’s new 70 ppb ozone standard will likely put half of all U.S. counties out of compliance and close down transportation, housing and factory projects, for minuscule to imaginary health benefits.

* The 2015 Paris climate treaty will cost some $484 billion per year for the next 25 years, just to replace carbon-based energy with wind, solar and biofuel energy, Bloomberg New Energy Finance calculates.

Now climate activists want EPA to use the Clean Air Act and Paris treaty to regulate and eliminate all vehicle, drilling, pipeline, landfill, gas-fired generator and other CO2 and methane sources, crippling our economy – and then still send hundreds of billions to developing countries for “climate reparations.”

But as climate scientist John Christy recently told Congress, the entire Obama climate agenda is based on computer models that do not work. “The real word is not going along with rapid warming” assertions, he emphasized. “The models need to go back to the drawing board.” And EPA’s rules need to be scrapped.

You may despise politics. But the politicians and bureaucrats are hot on your trail – and Democrats running for president would put Obama’s policies on steroids. (So would Michael Bloomberg). So get motivated, informed and involved – before our vibrant free enterprise republic is only a dim memory.