A Message For Pope Francis 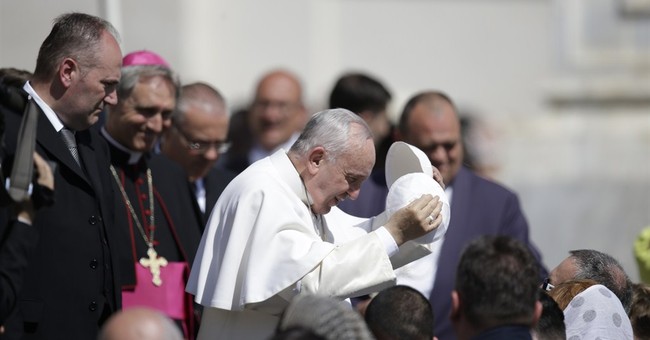 Pope Francis plans to deliver an encyclical on climate change this summer. To pave the way and outline the Pope’s positions, the Vatican’s Pontifical Academy of Sciences is holding a workshop on the topic, April 28 in Rome. The Committee For A Constructive Tomorrow and Heartland Institute will be there.

Cardinal Peter Turkson, director of the Pontifical Council for Justice and Peace and an author of the draft encyclical, says the UN’s Intergovernmental Panel on Climate Change has determined that “our planet is getting warmer.” Christians have a duty to help the poor, “irrespective of the causes of climate change,” and address what Pope Francis apparently believes is an imminent climate crisis. The encyclical will likely present global warming as “a critical moral issue” and set the stage for a new climate treaty.

That raises serious questions, which I have addressed in many articles – and which prompted Dr. E. Calvin Beisner and the Cornwall Alliance for the Stewardship of Creation to write an open letter to Pope Francis. The articles and letter reflect our years of studying climate change assertions and realities, and the ways climate-related restrictions on energy harm poor families far more than climate change will.

At the most fundamental level, too many IPCC reports and the apparent new papal position represent the rejection of Judeo-Christianity’s illustrious tradition of scientific inquiry, which has brought monumental improvements to our understanding of nature and creation – and to humanity’s once “nasty, brutish and short” lives on this planet.

As Nobel Prize-winning physicist Richard Feynman explained, we begin with a guess about a law of nature. Then we compute the consequences that would result if our hypothesis is correct – and compare actual observations, evidence and experimental data to the predicted consequences.

If the hypothesis and predictions are borne out by the observations, we have a new rule. But if the hypothesis “disagrees with the experiment, it is wrong,” Feynman says. That is honest, genuine science.

Alarmist climate science is precisely the opposite. That distorted version of science began with the hypothesis that carbon dioxide and greenhouse gas emissions from fossil fuels cause global warming. It served as the basis for computer models that assume rising CO2 and GHG levels will cause planetary temperatures and sea levels to soar, and hurricanes, tornadoes, floods and droughts to increase in number and intensity. The models predicted many such “scenarios” over the coming decades.

But Earth stopped warming 18 years ago; no major hurricane hit the USA for a record 9-1/2 years; seas are rising at barely seven inches per century; and even IPCC experts agree that long-term trends in weather disasters are not out of historic norms and are not attributable to human causes. The CO2-driven global warming disaster hypothesis and models do not reflect reality and are obviously wrong.

So alarmists began talking about “climate change” and blaming extreme weather events on human emissions. They assert that terrible things are happening at unprecedented levels, when they are not. Worst of all, they say we must slash hydrocarbon energy use that has brought once unimaginable health, prosperity, living standards and life spans to billions of people, after countless millennia of crushing poverty, malnutrition, disease, and death before age 40. Those fossil fuels still represent 85% of the world’s energy – and they are essential if the rest of humanity is to catch up and improve their lives.

Denying humanity the use of still bountiful hydrocarbon energy is thus not simply wrong. It is immoral – and lethal. It is for this reason, and only this reason, that climate change is a critical moral issue. No one has a right to tell the world’s poor they cannot use fossil fuels to improve their lives, or to tell others they must reduce their living standards, based on speculation and fears about a manmade climate crisis.

As Dr. Beisner notes, “Alongside good science in our approach to climate policy must be two preferential options: for humanity and, among humanity, for the poor.” This does not mean pitting humanity against nature, any more than to pit the poor against the rich. It means any effort to protect the environment must be centered on scientific truth and human well-being, and in particular the well-being of the poor, because they are more vulnerable, and less able to protect themselves. Climate alarmism does not do that.

Over the past three decades, fossil fuels helped 1.3 billion people get electricity and escape debilitating energy poverty – over 830 million because of coal. China connected 99% of its population to the grid and increased its steel production eight times over, mostly with coal, energy analyst Roger Bezdek points out.

They will also enable people to respond and adapt to future climate changes and extreme weather events, floods and droughts, heat waves, new “little ice ages” and other disasters, natural or manmade. More plant-fertilizing carbon dioxide in the atmosphere would enhance wildlife habitats and food production.

However, 1.3 billion people (the population of the United States, Canada, Mexico and Europe combined) still do not have electricity. In India alone, more people than live in the USA still lack electricity. In Sub-Saharan Africa, 730 million (equal to Europe) still cook and heat with wood, charcoal and animal dung. Hundreds of millions get horribly sick and four million die every year from lung and intestinal diseases, due to breathing smoke from open fires and not having clean water, refrigeration and safe food.

Imposing fossil fuel restrictions and renewable energy mandates – in the name of stabilizing planetary climate that has never been stable – would perpetuate Third World poverty, disease and death. In developed nations, it would reduce living standards, affect everything we make, grow, ship, eat and do – and cause thousands to die during cold winters, because they cannot afford to heat their homes properly.

It would be a needless tragedy – an unconscionable crime against humanity – if the world implemented policies to protect the world’s still impoverished and energy-deprived masses from hypothetical manmade climate dangers decades from now, by perpetuating poverty and disease, and killing millions tomorrow.

Just eight years ago, Pope Benedict XVI warned that any proposed “solutions” to global warming and climate change must be based on solid evidence, and not on computer models, unsupported assertions and dubious ideology. He suggested that concerns about man-made emissions melting ice caps and causing waves of unprecedented disasters were little more than fear-mongering. He argued that ecological concerns must be balanced against the needs of current and future generations of people.

Pope Francis apparently does not share his predecessor’s view about climate change fears. However, if he is truly committed to advancing science, the poor and creation, he should reject climate chaos claims unless and until alarmists can provide solid evidence to back up their assertions and models.

He should recognize that the issue is not global warming or climate change. It is whether human actions now dominate climate and weather fluctuations that have been common throughout Earth and human history – and whether those actions will cause dangerous or catastrophic changes in the future. Science-based answers to these questions are essential if we are to forecast future climate and weather accurately – and safeguard poor families, modern living standards and environmental quality.

Dr. Beisner has posted his letter to Pope Francis, for others to endorse this commonsense approach.

It is unwise and unjust to adopt policies requiring reduced use of fossil fuels, unless it can be conclusively shown that doing so will stabilize Earth’ fickle climate and prevent future climate disasters, Dr. Beisner concludes. “Such policies would condemn hundreds of millions of our fellow human beings to ongoing poverty.” We therefore respectfully ask Pope Francis to advise the world’s leaders to reject those policies.