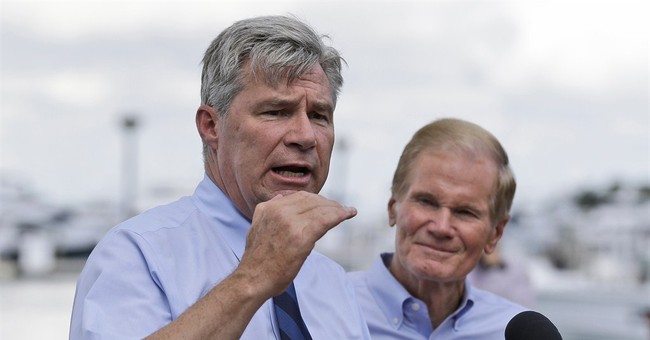 He says the skeptic community’s “overheated” response mischaracterized their motives and muddled their important messages: Global warming is the most serious threat we face today. Financial incentives can affect behavior, which is why the public and Congress need to know who funded the skeptics’ research. And companies that produce harmful products want to foment uncertainty about well-established health and safety risks: fossil fuel interests and climate chaos skeptics are just like the tobacco industry.

These senators are abusing their power of office to threaten and silence honest scientists, and destroy their funding, reputations and careers. It’s pure Saul Alinsky, as practiced by Greenpeace, Harry Reid and the other White House: “In a fight almost anything goes. Pick the target, freeze it, personalize it, and polarize it.” And the vilified scientists and their friends are just supposed to take it, the senators seem to think.

In reality, the only thing overheated is Mr. Whitehouse’s temper – and the increasingly preposterous rhetoric about an overheating planet. Climate change is altering our music. A 0.1 degree Celsius change in ocean temperatures has caused whales to migrate a month earlier than 30 years ago. Warming oceans will mean the end of fish and chips! Lord knows what other “disasters” await – all because of fossil fuels.

The absurdity of this fraudulent fear mongering and its total irrelevance to our daily lives explains why Americans consistently put climate change at the bottom of every list of concerns. The very idea that governments can decree an idyllic climate is equally crazy; that has happened only once in human history.

No wonder Mr. Obama is repackaging the climate issue under the equally false and ridiculous mantras of “ocean acidification,” and “carbon pollution” causing allergies and asthma. Our oceans are not becoming acidic. It’s not “carbon” – it’s carbon dioxide, the miracle molecule that makes all life on Earth possible. And neither CO2 nor planetary warming has anything to do with allergies or asthma.

Climate science was supposed to examine the effects that humans might be having on Earth’s climate. But anti-fossil fuel activists turned it into the notion that only humans affect the climate – and that the powerful natural forces that caused countless, sometimes devastating climate fluctuations in the past no longer play a role. Climatology was also supposed to be about the scientific method:

Pose a hypothesis to explain how nature works. Test the hypothesis and its predictions against real-world evidence and observations. If the premise is valid, the evidence will back it up. If the data and evidence are out of synch with the carbon dioxide/greenhouse gas thesis, come up with another hypothesis.

By now, it’s obvious that the “dangerous manmade global warming” thesis, and computer models based on it, do not explain what is happening in the real world. The planet stopped warming 18 years ago, despite rising fossil fuel use and CO2 emissions. The models don’t work; their predictions are completely out of whack with reality. Instead of more hurricanes, no Category 3-5 has hit the USA since late 2005.

So the alarmists changed their mantra to “climate change” and “weather disruption.” But this is bogus: it tries to blame every change and event on fossil fuels. The thesis can never be proven or disproven, which means it’s a religious tract, not a scientific analysis. Alarmists don’t have a leg to stand on scientifically.

That’s why they refuse to debate the science; why they vilify climate crisis skeptics. It’s why Democrats became so frustrated with Dr. Judith Curry’s expert testimony at a recent House Science Committee hearing that they left the room. They couldn’t stand it when she said the “central issue” is the extent to which recent (and future) planetary warming or other climate changes are driven by manmade greenhouse gas emissions, “versus natural climate variability caused by variations from the sun, volcanic eruptions, and large-scale ocean circulations.” And they really couldn’t tolerate her noting that President Obama’s pledge to slash U.S. emissions by 28% will reduce warming by just 0.03 degrees Celsius by 2100.

Climate change and extreme weather risks are real, but carbon dioxide doesn’t cause them today any more than throughout history. Aside from Pleistocene-style ice ages, we can adapt or respond to events – including storms, droughts, heat waves and extreme cold – if we have affordable, reliable energy, strong economies and modern technologies. The real threats to jobs, health, welfare and lives come from anti-fossil fuel policies imposed on the pretense that they will stabilize weather and climate. Forecasting future climate changes will be equally impossible if we remain fixated on carbon dioxide, and ignore the solar, ocean circulation, cosmic ray and other powerful natural forces that actually affect Earth’s climate.

Senator Whitehouse’s suggestion that climate chaos skeptics should be tarred and feathered with tobacco industry apologists is despicable demagoguery. So are his comments about funding realist research.

The skeptics’ funding was never secret. It was always an open book, available to anyone who cared to look. But since he brought up the money issue, let’s look at a few aspects that he studiously ignores.

Alarmist research is all about carbon dioxide, greenhouse gases and fossil fuels – precisely because financial incentives can and do affect behavior. Alarmists get a thousand times more money than skeptics. Climate Crisis, Inc. received hundreds of billions of dollars in government, industry, foundation and other money during the past couple decades. The US government alone spent over $186 billion in tax dollars on climate, “clean energy” and renewable energy projects from 2009 through 2014. Applicants know they won’t get grants if their theses and conclusions do not support climate alarmism and regulatory agendas.

Billions more went to government agencies that coordinate these programs and develop anti-hydrocarbon regulations. These bureaucrats don’t merely search health and scientific files to cherry-pick papers that support their agenda. They deliberately hunt only for supportive documents (many of which they pay for) and actively ignore, suppress and vilify research that focuses on (or even just discusses) natural forces.

Then the EPA and other agencies pay the American Lung Association, scientific advisory committees and other activists millions of dollars a year to rubberstamp their regulatory decisions. Even more destructive of our scientific method and political process, countless millions are also being funneled to climate chaos researchers and Big Green pressure groups via secretive foundations, laundered through front groups from Russian oil interests, and employed to further enrich billionaires like Warren Buffett.

The scandalous system has turned hardcore environmentalism into a $13.4-billion-per-year operation and represents an unbelievable abuse of our hard-earned tax dollars and the tax-exempt status of numerous foundations and activist groups. Cooperate and get rich; resist, and get the Whitehouse inquisition.

As a result, instead of science, we get opinion, propaganda, spin, pseudo-science and outright fraud – all designed to advance a anti-fossil fuel, pro-renewable energy agenda, that kills jobs and economic growth, endangers human health and welfare, and puts radical regulators and pressure groups in control of our lives, livelihoods and living standards. It also further corrupts our political system.

These Big Green companies, foundations, pressure groups and government unions give our politicians millions of dollars in campaign cash and in-kind help, to keep them in office and the gravy train on track.

Do Senators Whitehouse, Boxer and Markey plan to investigate those financial incentives and abuses?

Concerned citizens should ponder all of this on Earth Day, April 22 – and the next time they vote.