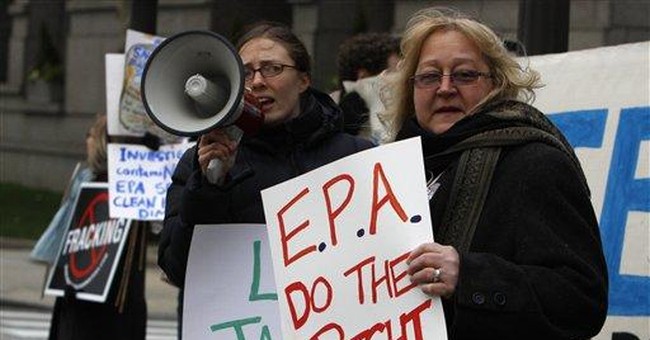 Editor's note: This piece was co-authored by Lawrence Kogan.

Can you imagine telling the IRS you don’t need to complete all their forms or provide records to back up your claim for a tax refund? Or saying your company’s assurances that its medical products are safe and effective should satisfy the FDA? Especially if some of your data don’t actually support your claims – or you “can’t find” key data, research and other records, because your hard drive conveniently crashed? But, you tell them, people you paid to review your information said it’s accurate, so there’s no problem.

Do you suppose the government would accept your assurance that there’s “not a smidgen” of corruption, error or doubt – perhaps because 97 percent of your close colleagues agree with you? Or that your actions affect only a small amount of tax money, or a small number of customers – so the agencies shouldn’t worry?

If you were the Environmental Protection Agency, White House-operated US Global Change Research Program and their participating agencies (NOAA, NASA, NSF, etc.), you’d get away with all of that.

Using billions of our tax dollars, these government entities fund the research they use, select research that supports their regulatory agenda (while ignoring studies that do not), and handpick the “independent” experts who peer-review the research. As a recent analysis reveals, the agencies also give “significant financial support” to United Nations and other organizations that prepare computer models and other assessments. They then use the results to justify regulations that will cost countless billions of dollars and affect the lives, livelihoods, liberties, living standards, health, welfare and life spans of every American.

EPA utilized this clever maneuver to determine that carbon dioxide and other greenhouse gases “endanger” public health and welfare. It then devised expensive, punitive regulations to control emissions of those gases from vehicles, electrical generating plants and countless other sources.

At the very least, you would expect that this supposedly “scientific” review process – and the data and studies involved in it – should be subject to rigorous, least-discretionary standards designed to ensure their quality, integrity, credibility and reliability, as well as truly independent expert review. Indeed they are.

The Information Quality Act of 2000 and subsequent Office of Management and Budget guidelines require that all federal agencies ensure and maximize “the quality, objectivity, utility and integrity of information disseminated by Federal agencies.” The rules also call for proper peer review of all “influential scientific information” and “highly influential scientific assessments,” particularly if they could be used as the basis for regulatory action. Finally, they direct federal agencies to provide adequate administrative mechanisms enabling affected parties to review agency failures to respond to requests for correction or reconsideration of the scientific information.

EPA and other agencies apparently think these rules are burdensome, inconvenient, and a threat to their independence and regulatory agenda. They routinely ignore the rules, and resist attempts by outside experts to gain access to data and studies. EPA Administrator Gina McCarthy has said she intends to “protect” them from people and organizations she decides “are not qualified to analyze” the materials.

Thus EPA’s Clean Air Scientific Advisory Committee reviews the agency’s CO2 and pollution data, studies and conclusions – for which EPA has paid CASAC’s 15 members $180.8 million since 2000. The American Lung Association has received $24.7 million in EPA grants over the past 15 years and $43 million overall via a total of 591 federal grants, for applauding and promoting government agency decisions. Big Green foundations bankrolled the ALA with an additional $76 million, under 2,806 grants.

These payoffs raise serious questions about EPA, CASAC and ALA integrity and credibility.

Meanwhile, real stakeholders – families and companies that will be severely impacted by the rules, and organizations and experts trying to protect their interests – are systematically denied access to data, studies, scientific assessments and other information. CASAC excludes from its ranks industry and other experts who might question EPA findings. EPA stonewalls and slow-walks FOIA requests and denies requests for correction and reconsideration. One lawyer who’s filed FOIA cases since 1978 says the Obama Administration is bar-none “the worst” in history on transparency. Even members of Congress get nowhere, resulting in testy confrontations with Ms. McCarthy and other EPA officials.

The stakes are high, particularly in view of the Obama EPA’s war on coal mining, coal-fired power plants, businesses and industries that require reliable, affordable electricity – and families, communities and entire states whose jobs, health and welfare will suffer under this anti-fossil fuel agenda. States that mine and use coal will be bludgeoned. Because they pay a larger portion of their incomes on energy and food, elderly, minority and poor families are especially vulnerable and will suffer greatly.

That is why the House of Representatives is moving forward on the Secret Science Reform Act. It is why the Institute for Trade, Standards and Sustainable Development is again filing new FOIA requests with EPA and other agencies that are hiding their junk science, manipulating laws and strangling our economy.

The agencies’ benefit-cost analyses are equally deceptive. EPA claims its latest coal-fueled power plant rules (requiring an impossible 30 percent reduction in carbon dioxide emissions by 2030) would bring $30 billion in “climate benefits” versus $7.3 billion in costs. Even the left-leaning Brookings Institution has trashed the agency’s analysis – pointing out that the low-balled costs will be paid by American taxpayers, consumers, businesses and workers, whereas the highly conjectural benefits will be accrued globally.

That violates President Clinton’s 1993 Executive Order 12688, which requires that agencies “assess both the costs and benefits” of a proposed regulation, and adopt it “only upon a reasoned determination that the benefits … justify its costs.” EO 12866 specifies that only benefits to US citizens be counted. Once that’s done, the EPA benefits plummet to between $2.1 billion and $6.9 billion. That means its kill-coal rules costAmericans $400 million to $4.8 billion more than the clearly inflated benefits, using EPA’s own numbers.

Moreover, the US Chamber of Commerce calculates that the regulations will actually penalize the United States $51 billion. Energy analyst Roger Bezdek estimates that the benefits of using carbon-based fuels outweigh any hypothesized “social costs of carbon” by orders of magnitude: 50-to-1 (using the inflated SCC of $36/ton of CO2 concocted by EPA and other federal agencies in 2013) – and 500-to-1 (using the equally arbitrary $22/ton estimate that they cooked up in 2010).

Even more intolerable, these punitive EPA rules will have virtually no effect on atmospheric CO2 levels, because China, India, Germany and other countries will continue to burn coal and other fossil fuels. They will likewise have no effect on global temperatures, even accepting the Obama/EPA/IPCC notion that carbon dioxide is now the primary cause of climate change. Even EPA models acknowledge that its rules will prevent an undetectable 0.018 degrees Celsius (0.032 deg F) of total global warming in 100 years!

Fortunately, the Supreme Court recently ruled that EPA does not have the authority to rewrite federal laws to serve its power-grabbing agendas. FOIA requests seeking disclosure of EPA records that could reveal a rigged climate science peer review process – and legal actions under the Information Quality Act seeking correction of resultant data corruption – could compel courts to reconsider their all-too-common practice of deferring to “agency discretion” on scientific and regulatory matters. That clearly scares these federales.

The feds have become accustomed to saying “We don’t need no stinkin’ badges.” The prospect of having to share their data, methodologies and research with experts outside their closed circle of regulators, collaborators and eco-activists almost makes them soil their shorts.

Bright sunlight has always been the best disinfectant for mold, slime and corruption. With America’s economy, international competitiveness, jobs, health and welfare at stake, we need that sunlight now.