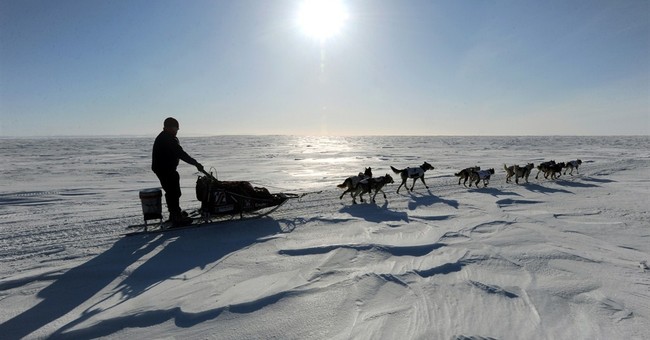 This winter’s record Midwestern freeze made any outdoor activity a real challenge. It also made us appreciate modern housing, heating, transportation and hydrocarbons – and what our frontline troops have endured in the Aleutians, Korea and Afghanistan. I’ve been in minus 20-50 F weather, and it is brutal.

The nasty weather reminded me of the Iditarod racers and spirited sled dogs I met last summer in Alaska. Trekking 1,100 miles from Anchorage to Nome, across Sam McGee’s wilderness in the dead of winter in nine to twelve days, is not for faint-hearted humans or canines. It’s equivalent to jogging from Chicago to Tampa or from Washington, DC to Kansas City – with temperatures ranging from a “balmy” 10 or 20 degrees F (-7 to -12 C) above to a bone-rattling and deadly minus 50 (-46 C) or lower for the entire trip.

It helps explain why far more people have reached the summit of Mt. Everest than have finished the annual Iditarod race: some 4,000 to Everest’s peak versus around 900 individual dogsledders, many of whom are the same hardy men and women racing year after year. About 2,550 dog teams of 16 dogs each have competed since Dorothy Page and Joe Redington, Sr. launched the Iditarod dogsled race in 1973.

Rick Swenson has entered the race 33 times and won it five times, logging more than 82,000 miles in training and racing. DeeDee Jonrowe has started 27 races and finished 25, including 2003 when she began three weeks after finishing chemotherapy for breast cancer! (Go here for still more Iditarod trivia.)

“The coldest I’ve ever been in during the Iditarod was minus 60, and I actually camped out on the trail that night with the dogs,” Rick Casillo told me. “It’s by far the coldest I have ever been. I went to sleep after taking care of the dogs, woke up two hours later and was starting to get hypothermic. I had to get out of my bag and get moving fast. When you’re dealing with temperatures like that, there is no room for error. You have to plan and execute each step perfectly.” Jack London’s “To build a fire” comes to mind.

Rick and his wife Jennifer operate Battle Dawgs Racing, Aurora Heli-Expeditions and the Knik River Lodge west of Palmer. But Battle Dawgs is not just their dog kennel. By partnering with Alaska’s Healing Hearts, they’ve made it a wounded veterans rehabilitation program that enables military personnel and their families and loved ones to experience wild Alaska, restore their souls, and meet kindred spirits through hunting, fishing, mushing, flying, hiking and snowmobiling.

James Hastings, director of operations for AHH and a retired U.S. Army veteran, says their goal with Battle Dawgs is to have a year-round camp with cabins and facilities that can accommodate warriors in wheel chairs. Adds Jennifer, an Air Force veteran and reservist, aircraft mechanic and chopper pilot: “For a wounded veteran, the true battle often begins when they get home.” That’s why the dogs are important. “The healing capabilities of canines are legendary,” Rick says. “You can’t spend time with these men and women, and not want to help out by offering them some life changing experiences.”

Some of warriors will actually be members of

Pre-season racing is like pre-season football, Rick says. “You use it to gauge younger dogs and give them valuable racing experience. I’m looking for attitude, recovery time, eating habits, drive and desire. These dogs are all born to run, but I need dogs that can do these runs over and over, willingly and happily.” Usually he spots these characteristics by opening day, but sometimes there are surprises.

“The toughest situation I was ever in was easily in 2007 when I was going up the Alaska Range from Rainey Pass,” Rick recalls. “The temperature was minus 30, with 40 mph winds – making it feel like minus 71 – and we were climbing in a complete whiteout. My goggles froze up solid and were useless. I was forced to take them off. Minutes later, frostbite set in on my nose, cheeks and eyelids. Sometimes I had to walk in front of the team to find the trail. All of a sudden, an 18-month-old dog started demanding to be up front, leading. Normally I would never rely on a young dog in a situation like that, but Grisman was jumping five feet in the air, howling to go. So I gave him a chance. Once I put Gris in lead, he never balked once. Not only did he take us up and over the range. He continued to be one of best dogs in that race and went on to be the best dog I have ever run.”

That experience underscores what are perhaps the six most important factors in Iditarod racing. (1) Bond and trust. “If you don’t have the dogs’ trust, you have nothing,” Rick emphasizes. (2) Mental and physical toughness, for dogs and musher alike. By the end of the race, each musher is tired, battered and cut up – attesting to the difficulty of the trail and weather, and to the need to just keep going, no matter what. (3) Logistics. More on that in a minute. (4-6) “Dog care, dog care, dog care. As the dogs go, you go.”

For UPS and Amazon, logistics are vital. “Brown” even has a jingle about logistics, and Amazon.com hires numerous veterans because of their logistical skills. But for the military and Iditarod racers, logistics mean the difference between success and failure, life or death. “We’re on our own out there,” Rick told me. “No cell phones, no communications. Careful planning and preparation are critical.”

Each dog burns 12,000 calories a day during the Iditarod, Rick points out. That’s what Olympic swimming champion Michael Phelps reportedly consumes on racing days. Rick’s dogs eat a combination of beef, horse, fish and chicken; beef fat and turkey and chicken skins; tripe and high-grade dry dog food; salmon oil and natural supplements. They wear booties to protect their feet from the cold and bruising.

Mushers are required to carry a sleeping bag, ax, snow shoes, extra dog booties, a veterinary care book, a dog food cooker and sufficient food for the dogs, in their sleds at all times. So they are hauling about 60 pounds of food and gear in sleds similar to what Inupiaq and Yup’ik Natives used for centuries. For each musher, some 3,000 pairs of booties and 2,000 pounds of food and personal gear are divided up and airlifted by volunteer flyers two weeks before the race to each of 20 check points along the route.

“We cover 125 to 150 miles a day. Our average runs are 60 miles, followed by a four-to-five-hour break to eat, rest, massage and care for the dogs – and then we do it again, and again, until we reach Nome,” Rick explains. Mushers are also required to shut down completely for two 8-hour and one 24-hour rest periods. Tough hills, rocks, swollen creeks, high winds, frigid temperatures, storms, whiteout conditions, accidents and injuries to dogs or mushers, and other adventures can slow that pace down. But somehow they need to make it to the next check point, where volunteer veterinarians examine the dogs and they can replenish their supplies. More volunteers fly any injured dogs from the nearest checkpoint back to Eagle River, where Hiland Mountain Correctional Center inmates care for them until the mushers finish the race.

The hard training and careful preparation pay off. Rick has entered and finished four Iditarod races and is now preparing for his fifth. He’s also competed in many other dogsled races. This year he plans to run at a slower pace that requires less exertion and less rest – and results in less fatigue and healthier dogs that can chew up miles. That’s a bit different from a musher who “ran” all 188 miles to Rohn with minimal breaks in the first race of the 2013-14 season. It will be fascinating to watch all the mushers’ strategies in action.

They’re all straining, sweating and freezing for the $50,000 first place prize – and smaller cash prizes for the next 30 top finishers, plus the joys and thrills of just being in this premier race. But competing in the Iditarod costs $30,000 or more in fees, supplies, dog care, preparation, training and prelims.

So follow Rick Casillo on BattleDawgsRacing.com and all the mushers, preparations, history and thrills of this amazing race at Iditarod.com. Buy some gear and DVDs. Support your favorite mushers and dogs with donations or by volunteering. And watch the race on television. It starts March 1 – and now you know enough to really understand and appreciate “the last great race,” the Iditarod.