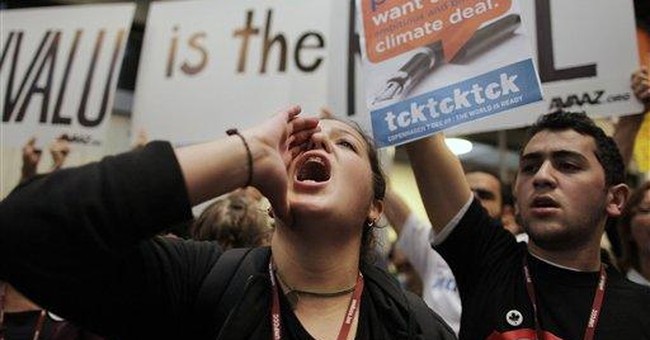 Who can forget the classic confrontation between Humphrey Bogart and Alfonso Bedoya in “Treasure of the Sierra Madre.” Now it’s being reprised in living color, featuring banditos from East Anglia, Penn State, Washington and the UN.

The United States alone has spent over $30 billion on alarmist “climate science” over the past 20 years – plus another $35 billion on renewable energy – based on the banditos’ tales of global warming catastrophe, if we don’t slash fossil fuel use and carbon dioxide emissions.

Their reports were “peer-reviewed” by networks of fellow alarmists who tied every temperature, weather and wildlife anomaly to global warming and carbon dioxide. When challenged, they claimed the “science is settled” and stonewalled requests from experts who did not accept dire predictions of planetary mayhem – and wanted to examine the raw temperature data, computer codes and analyses.

Suddenly, however, the world got a glimpse into the mindset and machinations of these tax-funded catastrophists. Thousands of emails revealed systematic, concerted collusion to conceal and delete data, manipulate temperature trends that contradicted predictions of dangerous warming, stifle debate, and pressure scientific journals to publish only alarmist studies and exclude dissenting analyses.

This fraudulent science is the basis for congressional cap-tax-and-trade legislation, EPA’s pronouncement that CO2 “endangers” human health and welfare, and the new global governance treaty being debated in Copenhagen. The actions would result in huge taxes on energy use, reduced liberties and living standards, millions of lost jobs, and a massive transfer of wealth from energy-consuming families and businesses to governments.

The proposed Copenhagen treaty authorizes the “transfer of technical and financial resources” from developed countries to developing countries, to help them address climate change impacts allegedly caused by hydrocarbon use in industrialized nations. Free or low-cost technology transfers would include electrical generation and pollution control equipment and patents. “Financial resources” would tally $50-200 billion per year, most of it apparently from the United States.

The money would come from fines for noncompliance with CO2 emission rules, a global “carbon tax” on energy use, a new levy on air travel, and “mandatory contributions” as high as 1% of GDP, paid by (formerly) rich developed countries, as new foreign aid for corrupt officials in poor nations.

One would think such actions would be based on rock-solid science. One would be wrong. It’s time to ask the critical question – which the White House, UN, EPA, “mainstream” media (especially the Associated Press, New York Times, ABC, CBS, NBC and CNN) have refused to address:

What evidence backs up the terrifying disaster claims, the calls for drastic “solutions” that won’t work, to a crisis that extensive evidence strongly suggests is speculative or even illusory?

Reliable satellite temperature measurements span most of the planet. However, they only cover the last 30 years – and for the past 15 years show stable and then declining temperatures, despite steadily rising CO2 levels. So climate crisis scientists have focused their “research” on ground temperatures.

However, nearly half of the world’s remaining ground-based gauges are in the United States, and cover just 1.8% of the Earth’s surface. Moreover, as meteorologist Anthony Watts has demonstrated, most of those gauges are close to air conditioning exhausts, tarmac, blacktop and other heat sources. So they read high, corrupting climate records, models and analyses.

Most of Siberia’s stations were shut down years ago, leaving that vast frigid region devoid of reliable data and further tilting average global temperatures upward. Britain’s combined marine and land-based temperatures were “value-added” (aggregated, averaged and manipulated) by its East Anglia University Climate Research Unit (CRU) – which then tossed or lost all the original raw data, so no one could check its methodologies, honesty or accuracy. (Try that tactic with your friendly IRS.)

The incomplete, averaged and manipulated ground temperature data were then fed into computer models that reflect our still limited understanding of climate causes and dynamics; assume CO2 is the primary driver in climate change; and poorly analyze the vast, complex, chaotic planetary climate system. The models have never been able to forecast climate accurately, even one year in advance, much less 50 or 100. They can’t reproduce prior years’ climates. They failed to predict the stable and declining temperatures of the past 15 years.

But even that didn’t conjure up the desired “manmade climate crisis.” As a CRU programmer put it, the only way the models can produce “the proper result” is when programmers apply a “very artificial correction,” use “low pass filtering at century and longer time scales,” and “include a load of garbage.

Back in 1999, CRU director Phil Jones reported that he’d “just used [Penn State climatologist Michael Mann’s] trick … to hide the decline” in average global temperatures. But in October 2009, US climate scientist Kevin Trenberth moaned that alarmists still “can’t account for the lack of warming and it is a travesty that we can’t.”

Nevertheless, “peer reviewed” scientific journals somehow produce “consensus” among “mainstream” scientists, offer “unequivocal” evidence of disastrous manmade global warming – and give the IPCC, White House, EPA and Congress the “proof” they need to justify treaties, laws and regulations that will send energy costs skyrocketing. Compliant media outlets whitewash the email and science fraud scandal, and trumpet the latest alarmist claims. And voila, like Freddy Kruger in “Friday the 13th,” the predicted warming crisis is back, just in time for Copenhagen.

Evidence tampering like this would get legal cases thrown out of court – and land the manipulators in jail. To use it in advancing economy-wrecking energy policies is criminal.

Just one week ago, President Obama promised jobs summit attendees, “We will do everything we can to bring down the unemployment rate.”

Within hours, he stepped up his arm-twisting for cap-tax-and-trade in the Senate, announced that he was going to Copenhagen to lobby for a new climate treaty, gave EPA the go-ahead to decree that carbon dioxide “endangers” human health and welfare, and endorsed still more restrictions on producing America’s vital, abundant hydrocarbon resources.

These decisions set the stage for job-killing government control of our energy, economy and lives. If they are implemented, millions of Americans will freeze jobless in the dark.