Paul Curry
|
Posted: Dec 18, 2019 9:42 AM
Share   Tweet
The opinions expressed by columnists are their own and do not necessarily represent the views of Townhall.com. 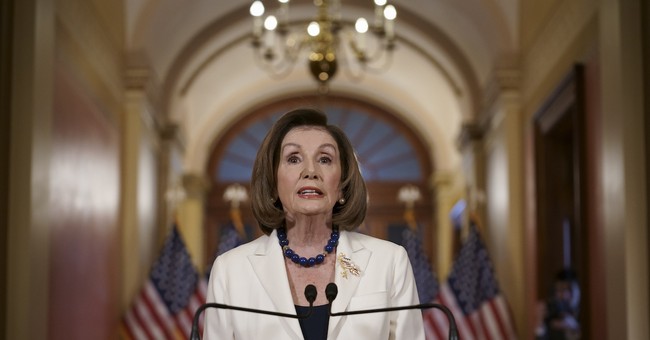 There is a reason why, until now, only two presidents in United States history have ever been impeached. It’s because impeachment, the second most awesome power the Congress has, used to mean something. There was a time when even Richard Nixon, one of the most Machiavellian and stubborn of all chief executives we have ever had, blinked when staring down the barrel of a certain impeachment and removal from office. There was a time when even the threat of impeachment was an effective check on presidential power. As a nation we need that power back. We need impeachment to mean something again.

House Democrats are impeaching President Trump because they don’t like him. They have run through faulty reason after faulty reason in a desperate search for an excuse, any excuse, to undo the election of 2016 and a probable repeat in 2020. The calls from the left for a necessary impeachment in defense of democracy began before Donald Trump even took the oath of office. Every pretextual reason, from Russia, to Mueller, to the current Ukrainian fantasy has fallen apart almost as quickly as it was slapped together. Now, after three years of tirelessly striving, to the detriment of the country and at the expense of Constitutional dignity, House Democrats are impeaching the president for the very same reason they have sought to since November of 2016, because they simply do not like him.

The damage the Democrats are doing through this baseless impeachment is not to the president, but to the future of the country as a whole. For his part, Trump should wish he had gotten impeached sooner. While Adam Schiff has been off on his rampage against reason, President Trump has had, arguably, the best few weeks of his presidency. A trade deal with China, USMCA, a budget deal, and progress on the border wall he can now count in his win column. And all the while, he has taken a commanding lead, over every potential 2020 challenger, in each and every battleground state. The Democrats have not damaged Trump with their ‘impeach at all cost’ obsession, but they have damaged, perhaps permanently, the power of the Congress to wield impeachment as a check on the executive. And that amounts to a weakening of the Constitution as a whole.

It would be the absolute pinnacle of naivete to assume, even for a brief moment, that this impeachment is anything but the first in what is almost certain to be, a continuous line of partisan impeachments. Take, for example, what the left has done to the Supreme Court nomination process. Look back to 1987, when Democrats feared a conservative nominee to the Supreme Court would stymie their agenda of judicial legislation. Immediately they launched an unrelenting, unforgiving, untrue, and, most importantly, unforgettable assault, not on the qualifications, but on the very person of Robert Bork. That did not prove to be a one-off. Rather, it became the norm as the confirmations of Clarence Thomas, Sam Alito, and most memorably, Brett Kavanaugh have proven. There is a very good reason why Clarence Thomas remains the only member of the current Supreme Court to be appointed and confirmed by a president and Senate of opposing parties. Justices will not, and should not under these conditions, willfully leave the Court when their ideological party does not hold both the White House and the Senate. Democrats set a trend in 1987, and the Supreme Court nomination process has suffered ever since. It would be absolutely foolish to believe that this same scenario will not follow with impeachment.

Democrats have, over the past several decades, systematically destroyed constitutional safeguards whenever it has suited their immediate desires. Advice and consent of the Senate, once intended to ensure a competent and measured nomination process, balancing the interests of the Court and the country as a whole, has now been reduced to a matter of who has the most votes, and, more importantly, can those votes stand up to an ever-increasing manufactured smear campaign. Similarly, the constitutional grounds for impeachment, treason, bribery, and high crimes or misdemeanors, have now been permanently augmented to include belonging to a different party than the Speaker of the House. This is an unworkable system and it cannot be allowed to persist.

It would be tremendously entertaining to see an impeachment trial in the Senate, and everybody loves a circus. It would be Emmy caliber T.V. to see Joe and Hunter Biden testify, followed by Adam Schiff. But none of that would be good for the country in the long run. Perhaps if House Democrats had managed to build even a somewhat plausible case against President Trump, a Senate trial would be justified, and we could indulge our guilty pleasures, but they haven’t, and we shouldn’t.

We need a constitutional safeguard against executive overreach. We need to be able to rely on an impeachment process that works, not settle for one based on which party controls which branch of government. The Senate needs to shut down this election-based, partisan-hoax of an impeachment and send a decisive message back to the House. Without it, we can expect a partisan show like this with every administration. Impeachment will be reduced to a meaningless and predictable sideshow. We need to make impeachment matter again because, as it stands right now, it doesn’t.