Is Trump Going Neocon in Syria?

Pat Buchanan
|
Posted: Sep 11, 2018 12:01 AM
Share   Tweet
The opinions expressed by columnists are their own and do not necessarily represent the views of Townhall.com. 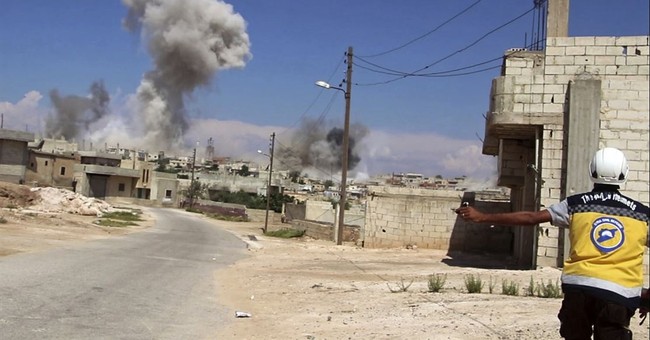 Is President Donald Trump about to intervene militarily in the Syrian civil war? For that is what he and his advisers seem to be signaling.

In a front-page story Monday, "Assad is Planning Chlorine Attack, U.S. Says," The Wall Street Journal reports that, during a recent meeting, "President Trump threatened to conduct a massive attack against Mr. Assad if he carries out a massacre in Idlib."

Idlib contains three million civilians and refugees and 70,000 rebels, 10,000 of whom are al-Qaida.

Friday, The Washington Post reported that Trump is changing U.S. policy. America will not leaving Syria any time soon.

The 2,200 U.S. troops in Syria will remain until we see "the exit of all Iranian military and proxy forces and the establishment of a stable, non-threatening government acceptable to all Syrians."

"We are not in a hurry to go," said James Jeffrey, the retired Foreign Service officer brought back to handle the Syria account. "The new policy is we're no longer pulling out by the end of the year."

President Obama had a red line against Syria's use of poison gas, which Trump enforced with bombing runs. Now we have a new red line. Said Jeffrey, the U.S. "will not tolerate an attack. Period."

In an editorial Friday, the Post goaded Trump, calling his response to Assad's ruthless recapture of his country "pathetically weak." To stand by and let the Syrian army annihilate the rebels in Idlib, said the Post, would be "another damaging abdication of U.S. leadership."

What Trump seems to be signaling, the Post demanding, and Jeffrey suggesting, is that, rather than allow a bloody battle for the recapture of Idlib province to play out, the United States should engage Russian and Syrian forces militarily and force them to back off.

On Friday, near the U.S. garrison at Tanf in southern Syria, close to Iraq, U.S. Marines conducted a live-fire exercise. Purpose: Warn Russian forces to stay away. The Americans have declared a 35-mile zone around Tanf off-limits. The Marine exercise followed a Russian notification, and U.S. rejection, of a plan to enter the zone in pursuit of "terrorists."

Is Trump ready to order U.S. action against Russian and Syrian forces if Assad gives his army the green light to take Idlib? For the bombing of Idlib has already begun.

What makes this more than an academic exercise is that Vladimir Putin and Iranian President Hassan Rouhani, at a meeting in Tehran last Friday, told President Erdogan of Turkey that the reconquest of Idlib is going forward.

Erdogan fears that the Syrian army's recapture of Idlib would send hundreds of thousands more refugees streaming to his border.

Yet the massing of the Syrian army near Idlib and the Russian and Syrian bombing now begun suggest that the Assad-Putin-Rouhani coalition has decided to accept the risk of a clash with the Americans in order to bring an end to the rebellion. If so, this puts the ball in America's court.

Words and warnings aside, is Trump prepared to take us into the Syrian civil war against the forces who, absent our intervention, will have won the war? When did Congress authorize a new war?

What vital U.S. interest is imperiled in Idlib, or in ensuring that all Iranian forces and Shiite allies are removed, or that a "non-threatening government acceptable to all Syrians and the international community" is established in Damascus?

With these conditions required before our departure, we could be there for eternity.

The Syrian civil war is arguably the worst humanitarian disaster of the decade. The sooner it is ended the better. But Assad, Russia and Iran did not start this war. Nor have Syria, Russia or Iran sought a clash with U.S. forces whose mission, we were repeatedly assured, was to crush ISIS and go home.

Trump has struck Syria twice for its use of poison gas, and U.S. officials told the Journal that Assad has now approved the use of chlorine on the rebels in Idlib. Moscow, however, is charging that a false-flag operation to unleash chlorine on civilians in Idlib is being prepared to trigger and justify U.S. intervention.

Many in this Russophobic city would welcome a confrontation with Putin's Russia, even more a U.S. war on Iran. But that is the opposite of what candidate Trump promised.

It would represent a triumph of the never-Trumpers and President Trump's relinquishing of his foreign policy to the interventionists and neoconservatives.