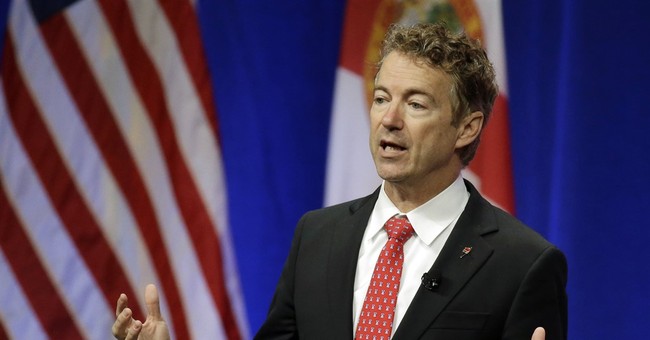 "If you're in favor of World War III, you have your candidate."

So said Rand Paul, looking directly at Gov. Chris Christie, who had just responded to a question from CNN's Wolf Blitzer as to whether he would shoot down a Russian plane that violated his no-fly zone in Syria.

"Not only would I be prepared to do it, I would do it," blurted Christie: "I would talk to Vladimir Putin ... I'd say to him, 'Listen, Mr. President, there's a no-fly zone in Syria; you fly in, it applies to you.'

"Yes, we would shoot down the planes of Russian pilots if in fact they were stupid enough to think that this president was the same feckless weakling ... we have in the Oval Office ... right now."

Ex-Gov. George Pataki and ex-Sen. Rick Santorum would also impose a no-fly zone and shoot down Russian planes that violated it. Said Gov. John Kasich, "It's time we punched the Russians in the nose."

These warhawks apparently assume that President Putin is a coward who, if you shoot down his warplanes, will back away from a fight.

Are we sure? After the Turks shot down that Sukhoi SU-24, Moscow sent fighter planes to Syria to escort its bombers and has reportedly deployed its lethal S-300 antiaircraft system there.

A U.S. Marine Corps aviator describes the S-300: "A complete game changer for all fourth-gen aircraft [like the F-15, F-16 and F/A-18]. That thing is a beast and you don't want to get near it." There are press reports that an angry Putin has ordered the even more advanced S-400 system moved into Syria.

Is Putin bluffing? Are we prepared to ride the up-escalator, at the top of which is nuclear war, if Putin, who has been boasting of his modernized nuclear forces, is also willing to ride it rather than back down?

Uber-hawk Lindsey Graham wants to send tens of thousands of American troops to fight ISIS, and refuses to work with Iran, Russia, or Syria's Bashar Assad to crush our common enemy ISIS.

Graham prefers "allies," like the Saudis and Gulf Arabs.

But both have bailed out of the air war on ISIS, and sent troops and bombers instead to attack the Houthi rebels in Yemen. Result: The Houthis have been in retreat and al-Qaida and ISIS are moving into the vacated territory.

Another Mideast base camp for terrorists is being created -- by us.

"I miss George W. Bush!" wailed Graham in the undercard debate. How many other Americans are, like Graham, pining for the return of a Bush foreign policy that gave us Barack Obama?

Yet, now, a rival school is taking center stage in the Republican presidential campaign, rejecting the knee-jerk hostility to working with Putin. Not only does Rand Paul belong to this school, so, apparently, do Donald Trump and his strongest challenger, Sen. Ted Cruz.

Cruz had previously disparaged the legacy of the "neocons" who prodded Bush into war in Iraq and championed a democracy crusade in the Middle East. In Las Vegas, he spoke of a new national-interest-based foreign policy, a policy that puts "America First."

"If we topple Assad ... ISIS will take over Syria, and it will worsen national security interests. And the approach -- instead of being ... a democracy promoter, we ought to hunt down our enemies and kill ISIS rather than creating opportunities for ISIS to control new countries."

Cruz rejects the Manichaean worldview of the neocons and their reflexive hostility to Russia, and appears willing to work with a Russian autocrat to crush a monstrous evil like ISIS, as U.S. presidents did in working with anti-Communist dictators to win the Cold War.

Midway through the debate, Trump cut loose with a sweeping indictment of mindless American interventionism in the Middle East:

"We have done a tremendous disservice not only to the Middle East -- we've done a tremendous disservice to humanity. The people that have been killed, the people that have been wiped away -- and for what? It's not like we had victory. It's a mess. The Middle East is totally destabilized, a total and complete mess. I wish we had the 4 trillion dollars or 5 trillion dollars. I wish it were spent right here in the United States on schools, hospitals, roads, airports, and everything else that are all falling apart!"

If we do not want Syria in 2016 to become what Sarajevo became in 1914, the powder keg that explodes into a world war, the War Party Republicans, who have learned nothing from the past, should be relegated to the past.