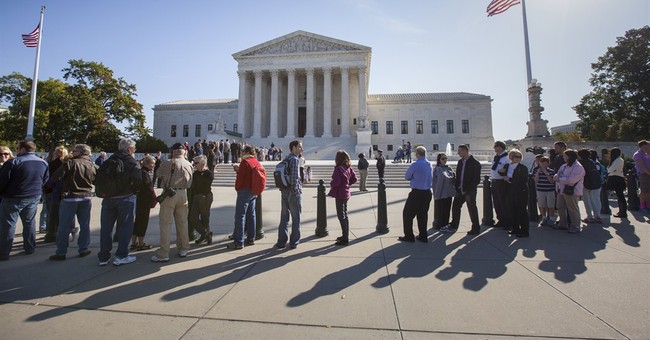 Almost all of the declared and undeclared Republican candidates for 2016 could be found this weekend at one of two events, or both.

The first was organized by the Iowa Faith and Freedom Coalition, and held in Point of Grace Church in Waukee.

Dominated by Evangelical Christians, who were 60 percent of Republican caucus-goers in 2008 and 2012, the Point of Grace Church event drew no fewer than nine Republican hopefuls.

Ex-Gov. Mike Huckabee and ex-Sen. Rick Santorum, past winners of the Iowa caucuses, were there. So, too, were Sen. Ted Cruz and Gov. Scott Walter. Cruz and Walker are sons of Christian preachers.

"At a forum before evangelical Christians," wrote The New York Times, "the Republican candidates told a cheering crowd that the fight over same-sex marriage would not end with a Supreme Court decision.

"Mr. Cruz said advocates of traditional marriage should 'fall to our knees and pray.'" Sen. Marco Rubio declared that the "institution of marriage as one man and one woman existed long before our laws existed."

At the second event, however, there was not a lot of kneeling and praying, and not much talk of same-sex marriage. For it was held in Sin City at the Venetian hotel-casino and home of Sheldon Adelson.

Having amassed a fortune of $29 billion from gambling dens in Macau and Vegas, the 81-year-old Adelson is among the richest men on earth. The event was the annual conclave of the Republican Jewish Coalition.

In Vegas, The Washington Post reports, "a crop of White House aspirants sought to outdo each other in opposition" to the Iran nuclear deal. "Ted Cruz declared that he 'intends to do everything possible to stop a bad Iran deal.' ... Indiana Gov. Mike Pence pledged that 'Israel's enemies are our enemies. Israel's cause is our cause.'"

Now, there is no conflict between being pro-Israel and anti-same-sex marriage. Yet there is still something jarring here.

What are candidates who profess Christian values doing in Sin City courting a casino mogul for millions in contributions, when that mogul compiled his immense fortune by exploiting the moral weakness of Christians and non-Christians alike?

Does not the Bible condemn gambling? Do Evangelical Christians not regard gambling as a vice, and a moral failing? Are not Christians supposed to practice what they preach?

"The nationwide explosion of legal gambling may well be the most underrated dimension of America's moral crisis," writes Mohler.

"The Bible is clear on this issue. The entire enterprise of gambling is opposed to the moral worldview revealed in God's word. The basic impulse behind gambling is greed -- a basic sin that is the father of many other evils. Greed, covetousness, and avarice are repeatedly addressed by Scripture ...

"Gambling is a direct attack on the work ethic presented by Scripture. ... Gambling corrupts the culture, polluting everything it touches. ... Why are Christians so silent on this issue? ... The silence and complacency of the Christian Church must end."

In defense of their courtship of Adelson, Republicans say that gambling is now legal. Yet, so is prostitution and marijuana in some precincts, and abortion and homosexuality are constitutional rights.

Would Christian conservatives accept campaign contributions from men who grew rich running abortion mills, or bathhouses for homosexuals, or from selling pot, or from Planned Parenthood?

Reportedly, Adelson contributed $92 million in 2012, to the campaigns of Newt Gingrich, Mitt Romney and other Republicans. And he is poised to spend more for a Republican president in 2016.

A tiny fraction of that $92 million, in attack ads, could break a candidate to whom Adelson is opposed. A large fraction could make credible a candidate who would otherwise be an also-ran who would not survive the first primary.

With that kind of money on offer, the temptation to tailor one's views to accommodate Adelson is great. But it is a temptation.

In this tale of two cities this weekend, Waukee and Vegas, we may be witnessing a shift in moral power in the Grand Old Party.

It is hard to imagine that the Moral Majority of Rev. Jerry Falwell in the Reagan years would have been comfortable with the ascendancy of Sheldon Adelson in the Republican Party hierarchy.

And as America appears to be accommodating herself to same-sex marriage, do the Family Research Council and Focus on the Family have the same following they once did?

When the Iowa caucuses are behind us, and the nominee chosen, will the Republican ticket still be eager to be associated with the Iowa Faith and Freedom Council? Or will the ticket be putting the social issues on a back shelf for the November election?

Is the triumph of Vegas values over Biblical values inevitable?