Is the Church Militant Back? 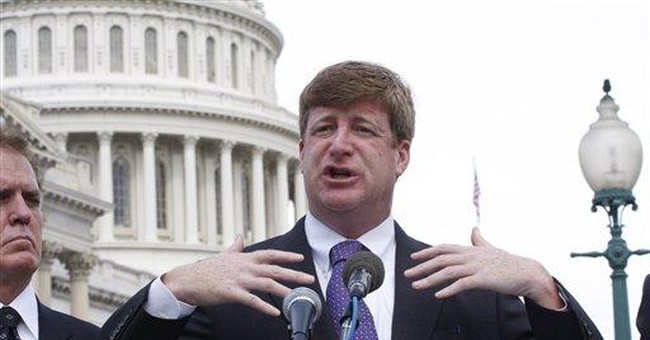 With the House debate on health care at its hottest, the U.S. Catholic bishops issued a stunning ultimatum: Impose an absolute ban on tax funds for abortions, or we call for defeat of the Pelosi bill.

Message received. The Stupak Amendment, named for Bart Stupak of Michigan, was promptly passed, to the delight of pro-life Catholics and the astonished outrage of pro-abortion Democrats.

No member was more upset than Patrick Kennedy of Rhode Island, son of Edward Kennedy, who proceeded to bash the Church for imperiling the greatest advance for human rights in a generation.

Rhode Island Bishop Thomas Tobin responded, accusing Kennedy of an unprovoked attack and demanding an apology. Kennedy retorted that Tobin had told him not to receive communion at Mass and ordered his diocesan priests not to give him communion.

False! The bishop fired back.

He had sent Kennedy a private letter in February 2007 saying that he ought not receive communion, as he was scandalizing the Church. But he had not told diocesan priests to deny him communion.

As Rhode Island is our most Catholic state, Kennedy went silent and got this parting shot from Tobin: "Your position is unacceptable to the Church and scandalous to many of our members. It absolutely diminishes your communion with the Church."

The clash was naturally national news. But Tobin's public chastisement of a Catholic who carries the most famous name in U.S. and Catholic politics is made more significant because it seems to reflect a new militancy in the hierarchy that has been absent for decades

Archbishop Donald Wuerl of Washington, D.C., just informed the city council that, rather than recognize homosexual marriages and provide gays the rights and benefits of married couples, he will shut down all Catholic social institutions and let the city take them over. Civil disobedience may be in order here.

Archbishop Timothy Dolan of New York sent an op-ed to The New York Times charging the paper with anti-Catholic bigotry and using a moral double standard when judging the Church.

During the "horrible" scandal of priest abuse of children, wrote the archbishop, the Times demanded the "release of names of abusers, rollback of the statute of limitations, external investigations, release of all records and total transparency."

But when the Times "exposed the sad extent of child sexual abuses in Brooklyn's Orthodox Jewish Community ... 40 cases of such abuses in this tiny community last year alone," wrote the archbishop, the district attorney swept the scandal under the rug, and the Times held up the carpet.

Dolan singled out a "scurrilous ... diatribe" by Maureen Dowd "that rightly never would have passed muster with the editors had it so criticized an Islamic, Jewish or African-American" faith.

Dowd, wrote Dolan, "digs deep into the nativist handbook to use every Catholic caricature possible, from the Inquisition to the Holocaust, condoms, obsession with sex, pedophile priests and oppression of women, all the while slashing Pope Benedict XVI for his shoes, his forced conscription ... into the German army, his outreach to former Catholics and his recent welcome to Anglicans."

Dowd, said Dolan, reads like something out of the Menace, the anti-Catholic Know Nothing newspaper of the 1850s.

The Times' refusal to publish the op-ed underscores the archbishop's point.

Nor are these the only signals of a new Church Militant.

The Vatican has reaffirmed that Catholics in interfaith dialogues have a moral right if not a duty to convert Jews, and reaffirmed the doctrine that Christ's covenant with his church canceled out and supersedes the Old Testament covenant with the Jews.

When Abe Foxman, screech owl of the Anti-Defamation League, railed that this marks a Catholic return to such "odious concepts as 'supercessionism,'" he was politely ignored.

The new spirit was first manifest last spring, when scores of bishops denounced Notre Dame for inviting Barack Obama, a NARAL icon, to give the commencement address and receive an honorary degree.

Among the motives behind the new militancy is surely the wilding attack on Pope Benedict for reconciling with the Society of St. Pius X, one of whose bishops had questioned the Holocaust. The pope was unaware of this, and the bishop apologized. To no avail. Rising in viciousness, the attacks went on for weeks. Having turned the other cheek, the church got it smacked.

In his May address to the National Catholic Prayer Breakfast, Archbishop Raymond L. Burke said, "In a culture which embraces an agenda of death, Catholics and Catholic institutions are necessarily counter-cultural."

Exactly. Catholicism is necessarily an adversary faith and culture in an America where a triumphant secularism has captured the heights, from Hollywood to the media, the arts and the academy, and relishes nothing more than insults to and blasphemous mockery of the Church of Rome.

Our new battling bishops may be surprised to find they have a large cheering section among a heretofore silent and sullen faithful who have been desperate to find a few clerical champions.