Oliver North and David Goetsch
|
Posted: Feb 15, 2022 12:01 AM
Share   Tweet
The opinions expressed by columnists are their own and do not necessarily represent the views of Townhall.com. 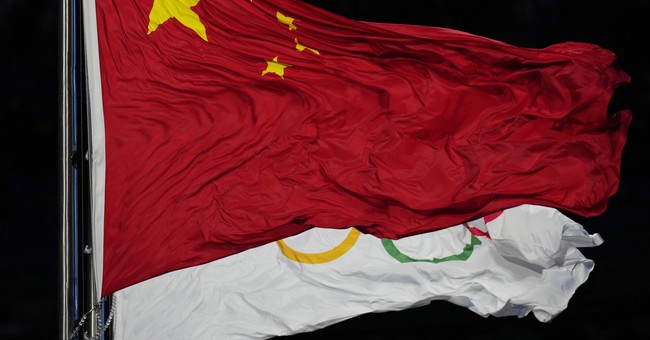 The world knew Xi Jinping and the People's Republic of China would use the 2022 Olympic Winter Games for propaganda purposes; that was expected. All countries hosting the games use the opening ceremony to put their best foot forward. However, even the most jaded China skeptics were taken by surprise when a Uyghur athlete marched out carrying the PRC's torch during the opening ceremony. One can only wonder if cross-country skier Dinigeer Yilamujiang was forced to carry the torch or if she is the worst turncoat since Benedict Arnold. The level of hypocrisy, deceit and hubris Xi demonstrated in having a Uyghur citizen represent the PRC in the opening ceremony boggles the imagination.

Having a member of this oppressed, abused and intimidated minority represent the PRC not just in the Olympics but in the opening ceremony was like Adolf Hitler "asking" a German Jew to be the spokesperson on behalf of the Holocaust. For an example closer to home, it was like Jefferson Davis, president of the Confederacy during America's Civil War, "asking" Frederick Douglass to be the spokesperson for slavery in the old South.

One can only imagine how Xi's minions went about giving Yilamujiang the "honor" of carrying the torch of a country that subjects her people to forced abortion, torture, forced sterilization, rape, forced birth control, beatings, forced labor, internment and brainwashing. It is clear her appearance in the Beijing Olympics was for propaganda purposes alone. After all, her 43rd-place finish showed she was hardly a medal hopeful. On the contrary, her appearance was intended to achieve something the PRC wants even more than an Olympic medal: credibility on the world stage.

The message Yilamujiang's torch-bearing moment was intended to convey was, "See how inclusive we are? Reports of Uyghur oppression are unfounded." The fact she disappeared after her event -- or was disappeared by the Chinese Communist Party -- thereby avoiding inconvenient questions from the world press, was no accident. Xi could not afford to have journalists asking a Uyghur athlete questions.

Xi is getting away with this cruel hoax, an unconscionable act of propaganda that makes Joseph Goebbels look like a dilettante. Why? Because the mainstream media in the free world continues to ignore the plight of the Uyghurs and other Turkic Muslim minorities in the PRC. Another reason is large American corporations operating in the PRC that know full well what is happening there and continue to look the other way in the name of quarterly profits and stock value.

American commercial shamelessness is graphically illustrated by those companies sponsoring this PRC puppet show. Coca Cola, Intel and Visa top the list. Also there, though not technically an American company, is Toyota in the top four. What tragic irony.

What makes the plight of the Uyghurs even more heart breaking is Xi knows the mainstream media won't make an issue of the CCP's brutal oppression of this minority group, and he knows executives of large American corporations operating in his country are mostly profit-driven cowards who would sell their country down the river to bolster stock prices.

We caution against thinking badly of Yilamujiang. It isn't likely she was asked to carry the torch for the PRC; it is more likely she was required to carry it. Xi and his minions in the CCP don't ask Chinese citizens to do anything -- they demand. Not surprisingly, they get what they want because they won't hesitate to use force up to and including death. The parallels in America await another article.

The torch-bearing Uyghur stunt shows the kind of tyrant our hapless, mumbling president is dealing with. God help us.