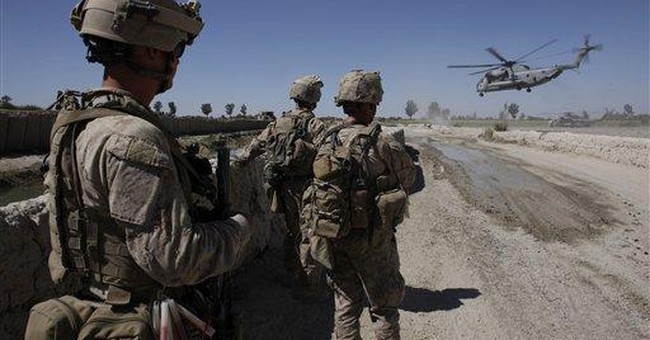 PIERRE, S.D. -- It's already the front edge of winter in America's Great Plains. Here, where the air is clear and crisp, there is a passion for walking behind a good dog while hunting pheasants, and a good "alibi" for missing a fast-flying bird is an art form.

"It was too low for a good shot" or "I didn't want to hit the dog" will get the taleteller extra credit for "prudence" -- once or twice. But if creative excuses exceed the number of birds brought home for dinner, a hunter soon loses the respect of his peers. Even the dogs recognize someone who is better at spinning yarns than bagging game.

That's President Barack Obama's problem with the fight in Afghanistan. He hasn't been willing or able to pull the trigger on a decision about what to do, and now he's running out of alibis.

During his quest for the presidency, Mr. Obama repeatedly referred to the campaign against the remnants of al-Qaida and the Taliban as the "central front in the war on terror" and Afghanistan as "the necessary war." In July 2008, he pledged: "I will send at least two additional combat brigades to Afghanistan and use this commitment to seek greater contributions -- with fewer restrictions -- from NATO allies. I will focus on training Afghan security forces and supporting an Afghan judiciary. I will once and for all dismantle al-Qaida and the Taliban." All these things still need to be done. But they haven't been. Instead, all we have are excuses.

By the time Mr. Obama made his March 27 decision to increase the "U.S. troop ceiling" in Afghanistan to 68,000, Taliban insurgents were flooding into the country from safe havens in neighboring Pakistan. In May, Gen. Stanley McChrystal, the president's hand-picked field commander, was dispatched to Afghanistan to implement the O-Team's previously announced "counterinsurgency strategy." Though the previously authorized U.S. force levels had yet to be achieved, we were told subsequently by the White House that there would be no further increases in American force levels until Gen. McChrystal completed a "detailed assessment of the situation."

On Aug. 20, in the midst of a dramatic spike in U.S. and allied casualties and widespread Taliban threats of reprisals against those who went to the polls, Afghanistan held a nationwide election for president -- only the second such vote in history. Ten days later, while Washington dithered over reports of ballot fraud in the Afghan election, Gen. McChrystal submitted his 66-page "assessment."

The document promptly disappeared -- along with recommendations on what it will take to win -- until a slightly redacted version of the report was published by The Washington Post, on Sept. 21. The subsequent furor on Capitol Hill finally prompted the O-Team to convene a series of National Security Council meetings for a "re-evaluation of our Afghanistan policy" and to "devise an effective strategy."

Instead of ordering Gen. McChrystal to Washington to testify before the House and Senate Armed Services committees about his estimate of the situation in Afghanistan, he was rebuked publicly for giving previously authorized press interviews and a speech to a security think tank in London. Since then, administration spokesmen, talking on and off the record, constantly have informed us that Mr. Obama simply cannot be rushed into a decision on our commitment in Afghanistan.

On Oct. 18, White House chief of staff Rahm Emanuel said a determination on additional troops and resources depends on "whether, in fact, there's an Afghan partner ready to fill that space that the U.S. troops would create and become a true partner in governing the Afghan country." Let's hope that Emanuel misspoke and did not mean to imply the U.S. is going to be a "partner" in governing Afghanistan. That would be a terrible mistake. But if he meant that decisions on Afghanistan will be postponed until after the final outcome of the Nov. 7 runoff between incumbent Hamid Karzai and his opponent, Abdullah Abdullah, that's nearly as bad.

The Taliban won't wait. Pakistan's current military offensive against radical Islamists in the mountainous Waziristan tribal region has forced thousands of insurgents to seek refuge closer to the border and in Afghanistan. Had the Obama administration decided months -- or even weeks -- ago to provide additional troops, mobility assets and resources for Gen. McChrystal, many Taliban fighters might well have decided to call it quits. That's precisely what precipitated the "Awakening" in Iraq after then-President George W. Bush ordered a "surge" in 2007.

The Obama administration has nothing to gain from further delay. The president's approval rating is now below 30 percent in some nationwide polling. Winter's hardship and privation are about to visit everyone in the wind-swept shadows of the Hindu Kush -- soldier and civilian alike. The Afghan people, huddled in the cold, are making up their minds about which side offers them the greatest hope for the future. A commitment now would make the contest next spring an easier fight. It's time for action -- not another alibi.