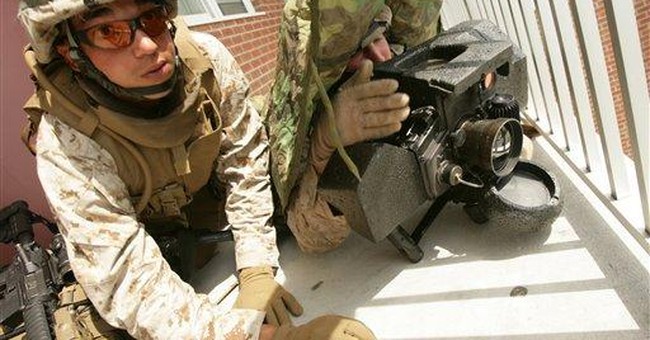 WASHINGTON -- Freedom Alliance is an educational and charitable foundation that, among other things, provides college scholarships to the offspring of U.S. military personnel killed in action. Every year, coincident with the Army-Navy game, the organization presents its "Defender of Freedom Award" to an individual whose character, courage and selfless deeds inspire virtuous service from the rest of us. This year's recipient, U.S. Marine Andrew Kinard, unequivocally meets these criteria.

On Oct. 29, 2006, Kinard was leading his Marines on a foot patrol in Rawah, Iraq -- searching for a terrorist bomb factory -- when a command-detonated IED exploded directly next to his left leg. The blast blew him into the air, and he landed almost 20 feet from the crater. Three other Marines were wounded.

According to those who were there, before the grievously injured officer passed out from loss of blood, he ordered them to set up security, get a head count, and start treating the other injured Marines. The platoon corpsman tried to stanch the flow of blood but couldn't find enough undamaged tissue to apply tourniquets, and Kinard was losing blood from almost everywhere.

A Casevac helicopter airlifted him to the Marine air base at al-Asad and then to the Army trauma hospital in Balad, north of Baghdad. Sixty-seven pints of whole blood -- more than five times the number in a healthy adult -- were pumped into the failing officer's veins in a 24-hour period.

By the time he was flown to Landstuhl, Germany, in a C-17 Nightingale, he had gone into cardiac arrest and been resuscitated twice. Emergency surgeries went on nearly nonstop to plug the seemingly innumerable holes punched in his body. The family was alerted, and a prayer vigil was held. Hundreds of people half a world away went to their knees and begged God for a miracle.

Some miracles happen immediately. This one took a while.

Four days after being blasted to pieces, Andrew Kinard was in the intensive care unit at the National Naval Medical Center, in Bethesda, Md., with his family around his bedside -- and still praying. By the time I got back from Iraq, just before Christmas 2006, "Drew" -- as his Marine and Naval Academy friends call him -- already had endured more than two dozen surgeries.

His doctor told me that the 24-year-old Marine was "getting better," even though Kinard had pneumonia, a blood infection and multiple perforations of his intestines from shrapnel. They had just done one of the many skin grafts necessary to prepare his stumps for prosthetic limbs.

When I walked into his room, his mother and his sister Katherine were with him. His dad, who is a doctor in Spartanburg, S.C., and two younger siblings, Courtney and Will, were all en route to spend Christmas with their badly battered Marine.

But for all the cards, posters, banners, Christmas stockings, lights, photos and flags, the room would have looked like a scene from a science fiction movie. Monitors, electronic devices, compressors, pumps and assorted tubes, wires and bags of colored fluids surrounded the bed -- all connected to Andrew Kinard. Tiny flecks of shrapnel were still visible on the side of his face. He had no legs. His abdomen was an open hole. And he was smiling. "God is good," he said in greeting.

During the next 11 months of hospitalization, Andrew Kinard was living proof of that statement. When I asked him or his family how I could help, the inevitable response would be, "Just pray for recovery." And so he also became evidence of the power of prayer.

In April 2007, he flew to Camp Lejeune, N.C., to meet his Marines when they returned from Iraq. Wearing his Marine utility uniform for the first time since being wounded, he greeted his comrades in a special "all-terrain" wheelchair.

Asked by a reporter to recollect the day he was wounded, he acknowledged that his memory of the attack had been dulled by shock and pain. Then he said: "A man asks himself: 'If something happens to me when I go into battle, how will I react? Will I be brave?'"

As they arrived home, the members of "Alpha" Company made it clear: Andrew Kinard was, without a doubt, their hero.

On Oct. 29, 2007, exactly a year after he was wounded, the indomitable young officer came home. Dignitaries and thousands of well-wishers were on hand to welcome Andrew at First Baptist Church in Spartanburg. The following Sunday, he spoke at all three services, thanking all for their unfailing prayers.

Andrew has all of that and more. He also has a great sense of humor. He has a T-shirt with the words "Marine For Sale" printed on the front. On the back, it reads, "40 Percent Off -- Some Assembly Required."