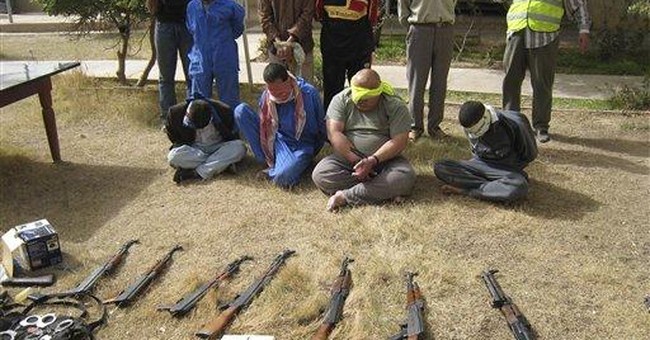 LOUISVILLE, Ky. -- The term "politically correct" is defined by The American Heritage Dictionary thus: "Of, relating to, or supporting broad social, political, and educational change, especially to redress historical injustices in matters such as race, class, gender, and sexual orientation." Add to that litany of "historical injustices" the title of my New York Times best-seller: "American Heroes in the Fight Against Radical Islam."

In recent weeks, the vocabulary police opened a new front in the war on terror by issuing a list of do's and don'ts for terrorism terminology. In an effort to fight a kinder, gentler war on Islamic radicals, the Office for Civil Rights and Civil Liberties at the Department of Homeland Security, in consultation with unnamed Islamic interest groups, has issued a paper titled "Terminology to Define the Terrorists: Recommendations From American Muslims."

This policy document warns U.S. government officials against "using theological terms, particularly those in Arabic, even if such usage is benign or overtly positive. Islamic law and terms come with a particular context, which may not always be apparent." The paper goes on to counsel: "It is one thing for a Muslim leader to use a particular term; an American official may simply not have the religious authority to be taken seriously, even when using terms appropriately." In other words, we infidels have no street cred in the Islamic world.

We are told that we should no longer use words and phrases such as "jihadist," "Islamic terrorist" or "Islamist." Using the word "Islamic," the experts have advised us, may "concede the terrorists' claim that they are legitimate adherents of Islam."

At best, this advice is seriously flawed. At worst, it is an ominous recipe that invites defeat, for it begs us to ignore the identity of those who have declared war against the West in general -- and the U.S. in particular. The authors urge us to disregard the first axiom of war: If you don't know your enemy, you will lose.

In an interview for Fox News' "War Stories," Bernard Lewis (the dean of Mideast scholars) contrasted the way we fought fascism during World War II with the current conflict: "Then we knew who the enemy was. We knew who we were. Nowadays we have great difficulty in defining the enemy. We have to be careful not to offend anybody. We don't even seem to be able to define our own cause, let alone the enemy's. This kind of uncertainty makes it very difficult to carry on any sort of struggle."

Unfortunately, the Department of Homeland Security policy paper -- drafted with the help of anonymous "influential Muslim Americans" -- not only makes the current struggle more difficult but also is riddled with outright falsehoods. The document states, "The civilized world is facing a 'global' challenge, which transcends geography, culture, and religion." That statement defies reality. We didn't label al-Qaida, Hamas, Hezbollah, Jemaah Islamiyah and Mahdi Army murderers (to name just a few of the groups I have seen in action) Muslim holy warriors; they did. We didn't call their savage suicidal bombing campaign an Islamic jihad; they did.

The Department of Homeland Security document insists that "Islam and secular democracy are fully compatible -- in fact, they can make each other stronger. Senior officials should emphasize this positive fact." That "positive fact" simply isn't. Save for Iraq and Afghanistan, where U.S. troops have become the protectors of Muslim women and nascent representative political institutions, there is no Islamic majority country where "secular democracy" flourishes. We didn't create these realities; Muslim leaders did.

Reality has little to do with this new wave of political correctness, and it goes well beyond this new DHS policy document. Muneer Fareed of the Islamic Society of North America told The Washington Times that he has contacted Sen. John McCain's office to urge him to "rethink word usage that is more acceptable to the Muslim community." Fareed is upset that McCain consistently refers to "radical Islamic extremism."

In London, the British government's Home Office has advised government officials that they should use words such as "violent extremism" instead of "terrorism." When fanatics carry out horrific attacks on innocent civilians in the name of Islam, the perpetrators should be referred to as "criminals" instead of "terrorists."

Not to be outdone in the political correctness department, the European Union has come up with guidelines on how to talk about terrorists who literally are dying to kill us. It warns, "Unintended stigmatization resulting from an ill-considered choice of words may have serious negative psychological effects and thus contribute to the process of radicalization." In other words, it's all our fault.

If we succumb to this kind of mindless mumbo jumbo and doublespeak to describe the Islamic radicals who are trying to kill us, we're courting uncertainty and defeat. Or as one very politically incorrect soldier put it plainly during a book signing this afternoon, we're screwed.