More of Ukraine is Ready to Fall 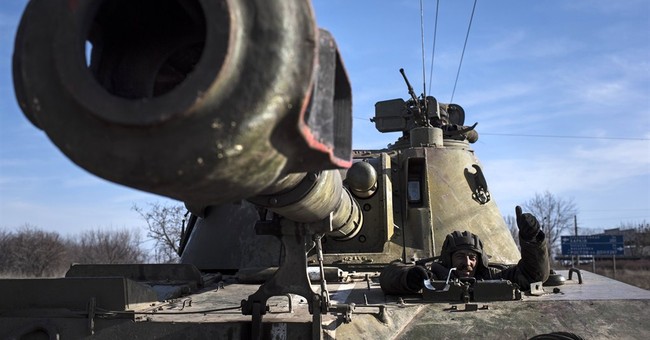 India-China: China said on Friday it had lodged an official protest against Indian Prime Minister Narendra Modi's visit to a border region claimed by both countries. Modi visited Arunachal Pradesh State on Friday, 20 February, to inaugurate the opening of a train line and power station. He did not mention China, but pledged billions of dollars of investment to develop infrastructure in the region.

The Chinese foreign ministry spokesman denounced Prime Minister Modi's visit to Arunachal Pradesh for the Statehood Day celebrations on the 20th. Spokesman Hua Chunying said China never recognized India's state of "Arunachal Pradesh.". He said the Chinese side is opposed to Indian leaders' activities in the disputed area, and has lodged solemn representations with the Indian side. Hua also said, "What the Indian side has done runs counter to the efforts by the two sides to properly resolve disputes."

Comment: Arunachal Pradesh is one of several border states where India is building infrastructure to support an increased permanent military presence with excess capacity to accommodate reinforcements, if needed. The Chinese protest is pro forma.

India and China engage in proper diplomatic relations that preserve stability, but surrender no claims to territory or hegemony. The Chinese do not recognize the colonial era McMahon Line as the boundary between the Chinese region of "south Tibet" and the northern border of India's state of Arunachal Pradesh. India and China have multiple border disputes of this type, unfinished business from British colonial times.

Cordial diplomatic relations between China and India are a veneer that thinly covers the extent of latent hostility between the two ancient empires. Leaders in both countries expect that there will be a grudge match between China and India for the Chinese invasion of India in 1962. That event is almost a cultural memory that forms the backdrop for all Indian dealings with China, plus China's military support for Pakistan for more than half a century.

Until both are ready to settle the grudge, they do business and make money off each other, but always to further an advantage in the larger strategic clash in the future. There cannot be two hegemons in Asia.

Turkey-Syria: A Turkish armored task group executed an overnight "raid" into Syria to rescue Turkish soldiers who were guarding an ancient Ottoman tomb. Nearly 600 Turkish soldiers and some 100 tanks and armored personnel carriers crossed into Syria on Saturday night with support from drones and aircraft. The Turkish forces moved through the Kurdish town of Kobani to recover the 40 Turkish army guards at the tomb of Suleyman Shah on the bank of the Euphrates River.

Turkish Prime Minister Davutoglu said, "We had given the Turkish armed forces a directive to protect our spiritual values and the safety of our armed forces personnel."

The soldiers recovered the guards, moved the Shah's remains, and razed the former burial site. They relocated the remains in a tomb near th4e Turkish border inside Syria, but under Turkish control; raised the Turkish flag over the new site and stationed tanks at the site as guards.

Comment: No news outlets have explained the timing of the Turkish raid nor provided an explanation why the forces of the Islamic State of Iraq and the Levant (ISIL) have not bothered the site.

The so-called "raid" forces have been stationed on the border for months during the fight for Kobani. The raid appears directed primarily at the Kurds in Kobani as a reminder of what Turkey is capable of doing to the Kurds. On the other hand, the Turks just demonstrated what they could have done months ago to counter ISIL. The Turks are far more hostile to the Ba'athists in Damascus than they are to ISIL.

Lebanon-Islamic State of Iraq and the Levant (ISIL): Over the weekend, one Middle Eastern news outlet reported that ISIL will soon declare Lebanon another province of the so-called caliphate.

Comment: ISIL's long term intention to absorb Lebanon is not new. The prospect that it might act soon is news and not confirmed by independent sources. ISIL enjoys limited support in northeastern Lebanon. Significant inroads by ISIL might be sufficient to unite Lebanese of all confessions in opposition.

Yemen: On 21 February, president or former president Abd Rabbuh Mansur Hadi, who resigned last month and has been in house arrest in Sana'a, escaped to Aden in southern Yemen. Hadi released a statement condemning the Houthi takeover as an illegitimate coup. He signed it as "the president of the Yemen Republic."

Hadi also called on the international community to intervene to return the country to implementing the outcomes of the Gulf Initiative signed in January 2014. That accord created a political road map to which all main political parties and factions agreed.

On 22 February, Aden's local television channel broadcast footage of Hadi meeting with the governors of several southern provinces and military commanders in a presidential retreat in the city.

As part of a UN-brokered interim deal, the house of representatives, most of whose members are from the former ruling party, will stay in place. Instead of a traditional upper house a new "transitional council "will be established. It will consist of traditionally unrepresented sectors among Yemen's formerly independent South, women and young people. Together the two bodies will pass legislation guiding Yemen's transition.

Comment: The UN's local representative appears to be heavily invested in the new proposal. The Houthis, however, appear to be stringing along the various factions, tribes and the UN to prevent outside intervention. None of the proposals for a government by committee are plausible, much less workable.

Thus far anti-Houthi tribes or groups appear unwilling or unable to test their strength against the Houthis. Meanwhile, Yemen is adrift

Ukraine: Over the weekend, the government and the rebels exchanged prisoners. Some commentators cited the exchanger as an encouraging sign that the ceasefire might hold. Clashes have devolved to local exchanges of fire from personal weapons.

A rebel spokesman said that the rebels would begin withdrawing their heavy weapons on 24 February, but news reporters said the withdrawal already has begun in some locations.

Ukrainians held marches and memorial services on 22 February for 100 people killed a year ago during an uprising that toppled pro-Russian president Yanukovych. At a rally in Kharkiv, a bomb detonated during the public commemorations, killing two and injuring ten people. .

On the coast of the Sea of Azov at Mariupol, Ukrainian sources reported a continued buildup of rebel forces.

Comment: Open sources are unable to confirm the reported buildup.

Comment: The bombing in Kharkiv raised concerns that pro-Russian elements had begun a program of subverting another part of eastern Ukraine. It is premature to draw any conclusions about additional subversion. Eastern Ukraine remains vulnerable and potentially unstable. The Ukrainian army has shown that it is incapable of preventing additional fragmentation of Ukraine east of the Dnieper River, if that is Russia's intention.

Niger: On 21 February, Boko Haram terrorists attacked an island on Niger's side of Lake Chad in Diffa Region, but the army repelled them after heavy fighting. There are no casualty reports.

On 21 February, French Foreign Minister Fabius arrived in Chad as part of a 48-hour trip to countries affected by Boko Haram's attacks. He also will travel to Cameroon and Niger.

Comment: The fight against Boko Haram continues, but the forces of order are starting to herd Boko Haram. In the end, this fight probably will expose partisan tribal politics at its core, as much as religion.

Nigeria: The Nigerian army claimed it has retaken the north-eastern town of Baga, which Boko Haram militants have occupied since 3 January. In a tweet from its official account, the army said there had been heavy casualties and that "mopping up" operations were continuing.

Comment: It is more than a coincidence that the Nigerian Army is performing better, as national elections near.