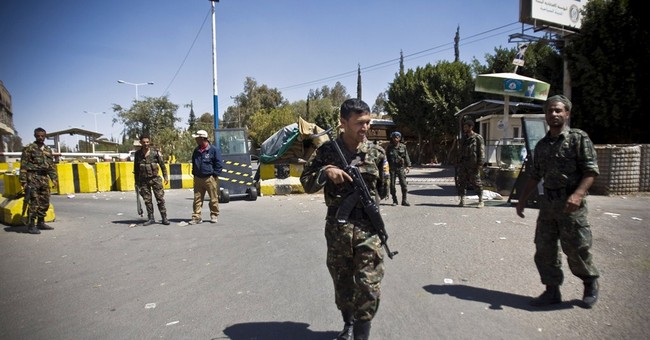 The militants seized the camp of the 19th Infantry Brigade in Bayhan, a town in southern Shabwah Governate. The official said three soldiers were among those killed. The militants captured 60 soldiers, but released them through the intervention of local tribal leaders.

Ansar al-Sharia, the main arm of Al-Qaeda in Yemen, claimed the attack in a statement posted to the Web. It accused the troops at the camp of having links to the Shiite Houthi militia which controls Sana'a.

The al-Qaida in the Arabian Peninsula (AQAP) media liaison said Ansar attacked the base Thursday morning, after learning the Yemen army was preparing to hand it over to the Houthis. The Houthis claim to be in command of the Yemen Army.

Comment: The news narrative about what happened at Bayhan is not credible. The garrison apparently chose to side with the southern Sunnis, led by AQAP, and the reports of a clash are probably part of the cover story. This incident could be the opening event in a southern Yemen Sunni uprising against the northern Shiite Houthi militias.

In the past weeks, multiple, lower tier news services have reported rising Sunni hostility against the Houthis. Opposition to a Houthi takeover in Sana'a reportedly is bridging local, tribal disputes to unify Sunnis against the Houthis, who are a Shiite sect.

The key question is whether Yemen shall remain a unified state. In instability analysis, control of the center - Sana'a - always is the objective of groups seeking to maintain a unified Yemen. Instability is always centripetal, except when it is fragmentary.

The Houthis' takeover of Sana'a signified their commitment to maintaining a unified state. Their move into Bayda indicated their intention to control all of Yemen. The Houthis invited the Sunnis to join the new political arrangement, under Houthi domination. That ruse failed.

The commitment of Sunni tribes and AQAP to a unified Yemen remains unknown. The defection of a single army base is ambiguous about larger political ambitions.

If the Sunnis intend to maintain a unified Yemen but not under Houthi domination, their forces will take control of southern Yemen and eventually will build sufficient strength to challenge Houthi control of Sana'a.

The alternative is to create an alternative center of power -- such as Aden -- thereby fragmenting Yemen again. If that is the objective, the Sunnis will not march north, but will fortify the south, seize all Yemen army assets, declare secession and invite a civil war.

The least covered topic is the Yemen army, which multiple sources said was the second largest Arab military force. With more than 60,000 soldiers, it had the numbers and capabilities to stop the Houthis months ago, but never received the order to protect the constitutional order. The US was deeply involved in forming and training this force.

No one has explained what happened to the Yemen armed forces so that they seem to have no role in the latest instability. Yemen looks like a banana republic in which the army stays neutral, but is willing to serve the winner of the political struggle, provided it gets paid.

Comment: Yemen is not collapsing, but it might be breaking apart. States devolve to a lower level of political or economic organization.

Yemen is in the middle of a process of political reorganization that could lead to devolution or the establishment of a new order in a unified Yemen. The Sunni antagonists have not yet decided whether Yemen shall remain a unified state or shall fragment.

Ukraine: The leaders of Germany, Ukraine, France and Russia agreed to a new arrangement to try to settle the Ukrainian civil war. The terms of the new agreement are listed below.

2.Heavy weapons will be withdrawn in a two week period starting from 17 February;

3.Ukraine and the rebels will amnesty all prisoners involved in the fighting;

4.All foreign militias will withdraw from Ukrainian territory and all illegal groups will disarm;

5.Restrictions in rebel areas of Ukraine will be lifted;

6.Ukraine will authorize decentralization for rebel regions by the end of 2015;

7 Ukraine will resume control of all borders with Russia by the end of 2015.

Comment: In a three against one diplomatic confrontation, Putin emerged with most of what he apparently wanted for Russia. The underlying presumption is that the rebels retain control of their regions. They gave up nothing.

The ceasefire provisions might work for a while, but no party has had the clout to enforce a withdrawal of heavy weapons. More pertinent is that the rebel rocket attack on Kramatorsk this week showed that buffer zones are almost impractical

Fighting. A Ukrainian military spokesman said around 50 tanks, 40 missile systems and 40 armored vehicles had crossed overnight into eastern Ukraine from Russia. Fighting continued in the east.

Nigeria: At least seven people were killed and 20 injured when a female suicide bomber blew herself up at a busy market in the town of Biu in northeastern Nigeria on Thursday.

Comment: This was the first incident outside the northeast border area this month.