Rebel Forces Use Long Range Rockets to Accelerate the Violence 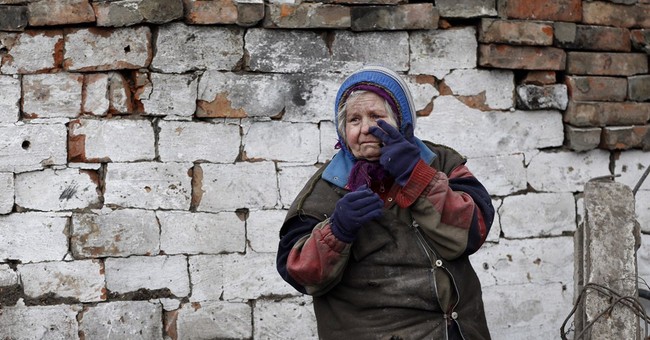 Ukraine: Ukrainian government sources said that the rebels fired long range rockets at Kramatorsk on 10 February. The rocket fire killed at least eight people and injured 31. The apparent target was a military base. Ten of the injured were at that location. The other casualties occurred from rocket explosions in a residential area.

Ukrainian officials said they confirmed that the rebels fired cluster munitions from the town of Horlivka, which they said is 80 kms from Kramatorsk.

Press services reported that a Ukrainian battalion began an offensive northeast of Mariupol. The purpose of this operation is to disrupt a rebel force build-up.

Comment: Rebel forces held Kramatorsk last summer, until they were driven out in July. The attack on Kramatorsk is significant for several reasons. NightWatch believes this the second time the rebels have used long range rockets recently. The rebels also used them to attack Mariupol in January. They enlarge the battle space and target rear areas that the Ukrainians had considered safe. This attack reinforces the judgment that the rebels intend to take back the entire region, as their leaders vowed last month.

The Ukrainian army had 300-mm and 220-mm long range multiple-round rockets and launchers in its inventory before the civil war.

The Mariupol operation is a local action to try to prevent another rebel attack. Neither the government nor rebel forces appear disposed to accept a ceasefire soon.

Russia: On the day before, President Putin left for Egypt, he commented on the peace talks tentatively set for 11 February in Minsk, Belarus. He told the press, "The most important condition for the stabilization of the situation is an immediate cease-fire and an end of the so-called 'anti-terrorist', but in fact punitive, operation in the south-east of Ukraine…Kiev's attempts to exert economic pressure on Donbas (the region of east Ukraine) and disrupt its daily life only aggravates the situation. This is a dead-end track, fraught with a big catastrophe."

President Putin said the summit on Wednesday would take place "if by then we have managed to agree on our positions."

Comment: The Russian government released an English language transcript of President Putin's comments. Putin met Egyptian President al-Sisi on the 9th. He is in Egypt for a two-day visit.

The Russians appear to have scaled back any expectations of a breakthrough. The talk about an immediate ceasefire appears to be for the public record. There is no chance that the rebels will cease firing and the Russians must know it.

Yemen: Press images today showed Shiite Houthi forces entering al-Bayda, the capital of al-Bayda governate in central Yemen, without resistance. This is their first attempt to expand control since the government resigned on 22 January.

The top Houthi leader in Sana'a, Saleh Ali al-Sammad, told the press that the Houthis want all factions to participate in the government. For now, a Revolutionary Committee makes executive decisions.

The US State Department announced that it closed the US Embassy in Sana'a because of the unstable and unpredictable security situation.

Comment: The Houthi force that entered Bayda might have caught the local tribes by surprise. Local tribes in al-Bayda and Ma'rib oppose the Houthi regime in Sana'a. Ma'rib's tribes promised to defend their governate against the Houthis.

The Houthis need to control Ma'rib because it is the primary oil producing region. At this point, the Yemen situation has moved closer to civil war.

Syria: The Syrian Observatory for Human Rights told the press that two days ago Syrian government forces began an offensive to clear non-jihadist rebels from the region southwest of Damascus. "The operation started two days ago and is very big," according to Rami Abdulrahman, who heads the Syrian monitoring group.

Abdulrahman said the offensive aims to take back a triangle of rebel-held territory from rural areas southwest of Damascus to Deraa city to Quneitra.

Niger: The government announced a state of emergency for southeastern Niger. "The state of emergency is proclaimed in the Diffa region for a period of 15 days," a statement read on state radio said. "The situation in Diffa is very serious," Niger Defense Minister Karidio Mahamadou said. "We will do everything to protect the population. We will wage war against Boko Haram all the way to its last hideout."

According to the press, locals in Diffa reported that Boko Haram sleeper cells infiltrated their communities, hiding among the 125,000 Nigerian refugees.

Comment: The state of emergency expands the police powers to include unannounced entry of buildings and summary population control measures. The Nigerian refugee population has strained local resources, especially food supplies. The emergency powers also will facilitate the search for sleeper agents and infiltrators.

Niger votes to fight. On 9 February, parliament unanimously approved the deployment of troops to northern Nigeria as part of a regional offensive against Boko Haram. Press services reported that Niger has deployed 3,000 soldiers in Diffa region in preparation for the offensive.

"The pooling of the efforts and resources of concerned countries will contribute without doubt to crushing this group which shows scorn, through its barbaric acts, for the Muslim religion," Niger's parliamentary speaker, Adamou Salifou, said after the vote late on Monday.

Comment: With the addition of the Nigeriens, the multi-national forces now total at least 6,000 soldiers. The promised Nigerian contingent of 2,500 troops would bring the strength up to 8,500, the original target. Benin also has pledged to provide a contingent.