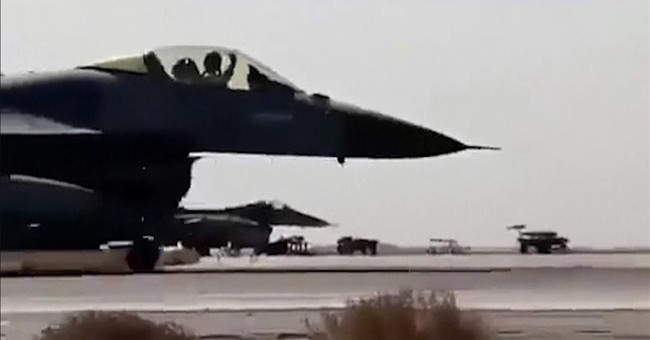 North Korea: North Korea fired five short-range missiles into the East Sea on Sunday, 8 February, according to South Korea's Joint Chiefs of Staff (JCS). The projectiles were "presumed to be fired from Wonsan." They flew in a northeastern direction for about 50 minutes from 1620 local time. JCS spokesman Jeon Ha-kyu said that the missiles flew some 200 kilometers before landing in the sea.

North Korean propagandists usually put political spin on nearly every display of military force. Nevertheless, many North Korean military activities are routine, for a large standing armed forces still at war. Missile firings during the winter training cycle might have a political point, but they certainly are a necessary part of crew readiness training as well as quality control testing of a production batch.

Comment: By shifting its attack forces to Jordan, the UAE has shortened flight time to targets and has altered its target strategy to Syria. Previously, UAE aircraft only attacked targets in Iraq. Jordanian air attacks into Syria provide cover for UAE pilots to attack ISIL targets in Syria because they are supporting fellow Arabs. That reduces the taint of Muslims working directly with Americans to attack fellow Muslims.

Jordan-ISIL: Jordanian officials announced that the Royal Jordanian Air Force has conducted 56 air attacks against ISIL targets in the past three days. More importantly, they said the focus of Jordan's air strikes is Raqqa, the ISIL headquarters/

Comment: The number of attacks indicates a staged, rather than all out, campaign. Sustained attacks against Raqqa, however, signify that Jordan is serious about destroying ISIL. Fifty-six attacks against targets in Raqqa would be significant.

The UAE's action in basing a squadron in Jordan indicates strong Arab backing for Jordan's King Abdullah. There is a significant risk for both states because they are attacking jihadis. JIhad is the sixth pillar of Islam. Islam lacks a single authority to determine what constitutes orthodox jihad for devout Muslims and what is unIslamic. Two Muslim monarchs have made such a determination and backed it with action.

Ukraine: While diplomats debated the terms of a new settlement or ceasefire agreement this weekend, Ukrainian forces counter-attacked in the Debal'tseve salient.

Rebel spokesman Eduard Basurin told the press on 8 February, "In the past 24 hours, as a result of armed clashes along the entire front line, the Donetsk People's Republic's armed forces lost in total one infantry fighting vehicle, one self-propelled artillery unit, three mortars, 11 men killed and 29 wounded."

He said the most intense fighting was in the suburbs of Debal'tseve, where the enemy "is desperately trying to push back the encirclement and retake control of the population centers around the town which were abandoned earlier."

Comment: As of this Watch, the Ukrainian counter-attack has failed.

Diplomacy. The leaders of Russia, Ukraine, Germany and France intend to meet in Belarus's capital, Minsk, on Wednesday, 11 February, to discuss a peace plan for eastern Ukraine. The leaders of the four nations discussed "a package of measures" to try to reach "a comprehensive settlement of the conflict in eastern Ukraine," a spokesman said.

Russian Foreign Minister Lavrov said he expected the meeting in Minsk to produce "important decisions". Russian President Putin said the planned meeting would only take place "if by that time we manage to agree on a number of points." Putin's points included a ceasefire and an end to the Ukrainian blockade of the eastern regions.

Comment: Apparently Russia will represent the views of the Ukrainian rebel administrations as well as its own. That approach has been tried and failed in the past five months. If Russia insists on a ceasefire as a condition for talks, no talks will occur. That is because the fighting forces have not yet reached the point of exhaustion on both sides that creates conditions and a window for successful talks.

Niger: Boko Haram fighters attacked the town of Diffa on the night of 7 February into Sunday morning, 8 February. Press reports said that Nigerien Army forces drove off the terrorists. One person was killed and six were injured.

Comment: Boko Haram does not give up easily once it has selected a target. The attack on Saturday night was the second in two days. The armies of the Francophone countries are standing and fighting and driving off the Islamist terrorists. The war is changing because Boko Haram has little religious or tribal claim in the states that neighbor Nigeria.

Nigeria: The Nigerian election commission announced it postponed presidential elections from 14 February to 28 March. It said the commission cannot lightly wave off the advice of the nation's security chiefs. " ... The risk of deploying young men and women and calling people to exercise their democratic rights in a situation where their security cannot be guaranteed is a most onerous responsibility," Independent National Electoral Commission (INEC) chairman Attahiru Jega told reporters.

Comment: Nigerian analysts judge that the real reason for the delay is that President Jonathan is unsure of his re-election and needs more time to build or buy more support.

Comment: An earlier announcement promised 7,500 soldiers from Central Asian States, but Benin and Niger were not mentioned. Thus far Niger, Cameroon and Chad are doing their part. The role and force contribution of the Nigerians are not known.