Japan Gets Ready For War 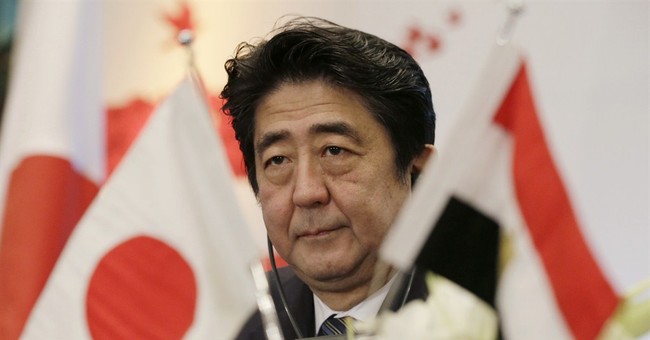 Japan: The Abe government wants permanent authority for sending Japanese forces on logistic missions for multi-national troops. At an Upper House Budget Committee meeting on 5 February, Abe said he's considering permanent legislation because quickly deploying the forces abroad is difficult when the Diet is in recess.

Abe also said that seeking Diet approval when deploying the forces abroad has been customary. He said he will consider the matter in pursuing the permanent legislation. He ruled out the possibility of combat missions for Japanese troops.

Comment: All past Self Defense Force overseas missions have required passage of a special law authorizing each deployment. This legislation might be a key component -- a building block -- in a larger strategy to enable Japan to respond more quickly to defend its citizens and interests. If that hypothesis is accurate, permanent authority for logistics missions probably is less contentious than other steps because Japan has contributed logistic support to multiple missions since 2001.

The main purpose of this article apparently is to clarify that yesterday's National Defense Commission statement should be understood as the North's "Final Notice" to accept its offer of talks or face an all-out war of confrontation. The writer said that the news report about North Korean training to attack a US aircraft carrier is linked to the National Defense Commission statement.

He also clarified that when North Korean media mention "mad dogs" they are referring to "the Obama administration." The North Korean government, the author wrote, has no need to sit down to talk with "mad dogs."

Comment: The North Korean propaganda apparatus is doing everything it can to try to prod the US to agree to talks. The threats are all intended to show they are serious, but the propaganda tactic is shopworn. South Korea and the US expect provocations at any time. In an Alliance that is ready for war, the threat of a war of confrontation - whatever that means -- seems like a lesser problem.

Jordan-Islamic State of Iraq and the Levant (ISIL): Various press outlets reported that the Royal Jordanian Air Force airstrikes killed 55 ISIL fighters, including a senior commander known as the "Prince of Nineveh." The Jordanians have named their operation "Martyr Muadh," after the murdered pilot. Jordanian officials said the operation is just beginning.

Comment: The Jordanian attacks re-confirm that ISIL has no effective air defense. They are easy targets and have been during the past year.

The Jordanian escalation, for as long as it continues, represents a pivotal point in the fight against ISIL. A competent Arab military force is at war with the ISIL Arabs. Devout Sunnis are taking the fight to takfiri Sunnis. The fight, for now, is much less about overthrowing the Ba'athist government in Damascus than it is about revenge and curing a deviation in Islam.

The Syrian news agency reported that the Syrian Arab Air Force killed 45 ISIL fighters and wounded 100 in its attacks today. The Ba'athists are taking advantage of the extra help. A key indicator of Jordan's long term intentions is whether the Jordanians attack the ISIL headquarters at Raqqa.

United Arab Emirates(UAE)-US: US media reported that the US has moved a V-22 Osprey combat search and rescue (CSAR) unit to Irbil in northern Iraq from Kuwait, ostensibly to satisfy the demand by the UAE for closer and more responsive CSAR support for its pilots. This week media reported the UAE halted all air attacks in Iraq last December after the Jordanian pilot was captured.

Comment: Presumably the UAE pilots, whom the USAF rates highly, will join the air campaign. The price is a larger US military presence in Kurdistan to support the CSAR unit.

Yemen: On 5 February, most Yemeni factions agreed to set up an interim presidential council to manage the country for up to one year, negotiators said.

Delegates from nine parties and groups, including a faction from the south, agreed on a five-member presidential council that would be headed by Ali Nasser Mohammed, a former president of South Yemen before the 1990 merger with North Yemen.

Comment: The Houthis threatened to take over the government unless the politicians and faction leaders found a political solution for state leadership. A presidency-by-committee is certain to fail, but it might avert a civil war and it keeps the country from fragmenting, for now. The Houthi political grievances that precipitated the crisis remain unaddressed.

Niger-France: A French army official told the press that a detachment of 10 military personnel had been stationed in Diffa at the request of Niger. "It is there to coordinate the armies on the ground in the fight against Boko Haram," the official said

Speaking at a news conference on Thursday, French President Hollande said France also is providing logistical and operational support, such as delivering fuel and munitions to countries fighting Boko Haram.

"This is a message to the international community and the biggest countries. Do your work! Stop giving lessons and take action!" Hollande said.

Comment: The description of the French team suggests it will establish and run an operations control center. The French are also providing the logistical backbone, as expected. Readers should assume that the US also is providing airlift support because the French Air Force's long range transport capability is limited. French operations in Mali I 2013 exposed that as a deficiency which US, UK and other NATO air forces corrected.

The fight against Boko Haram is multi-national now and finally looks like a serious effort. One indicator is an increased use of airstrikes against Boko Haram, who like ISIL, lacks air defenses. Press accounts seldom mention Nigerian air activity in support of Nigerian ground forces. In the last week, reports on every Chadian and Cameroonian combat action mentioned tactical air support, but the accounts never mentioned the nationality of the aircraft.

Roundup of the fight in northeast Nigeria against BokoHaram: A French language news service devoted to African issues published a casualty count in the fight against Boko Haram during the first four days of February.

The article said the casualty numbers were compiled from figures announced by the three armies and local sources.

Maiduguri, Nigeria: clashes in the city of Maiduguri and its outskirts led to 461 Boko Haram deaths and 52 deaths on the side of the Nigerian military and the city's civilian defense committees.

Malamfaturi, Nigeria: 123 terrorist fighters were killed in the shelling of Malamfaturi and Gamboru, according to the Chadian military.

In all, the death toll from four days of fighting is as follows:

Comment: The civilian death toll is understated. The Boko Haram numbers probably are inflated. Nevertheless, the fighting has been bloody.

The turnabout in the fight could influence Nigerian presidential elections on 14 February. The timing of the Chadian intervention seems uncannily fortuitous for the political futureof Nigerian President Goodluck Jonathan.

Some Nigerian analysts persuasively argue with credible evidence that provincial Nigerian government officials are strong supporters of Boko Haram. They might be witnessing the degradation of a key part of their constituency