Ukraine Calls Russia What It Is 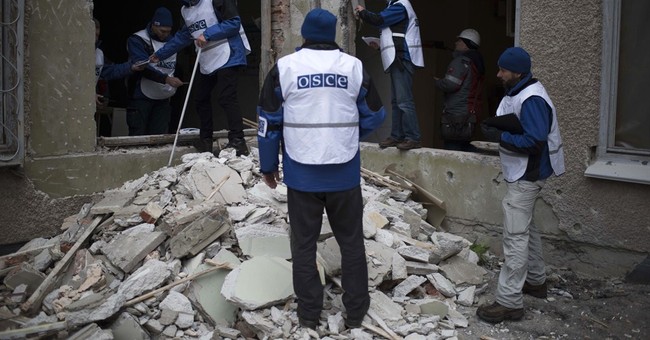 China-India-US: Chinese reaction to the US-Indian nuclear arrangement has been predictably negative. The Foreign Ministry spokesman commented on US support for Indian membership in the Nuclear Suppliers Group (NSG) and three other international export control regimes.

"We support the Group's carrying out discussions on admitting new members, and at the same time we encourage India to take next steps to satisfy the relevant standards of the group….We believe that such (an) inclusion should be conducive to the integrity and effectiveness of the regime and the decision should be made on consensus. We notice India's commitment to relevant issues," said Foreign Ministry spokesperson Hua Chunying.

Comment: China analysts wrote that China's position is that India should first join the nuclear Non-Proliferation Treaty (NPT). China also judges that Pakistan should be allowed to join the NSG and probably would push for Pakistani membership should the US push for Indian membership.

The language about" noticing India's commitment to relevant issues" means India has not complied with safeguards in the NPT, among other control regimes. The message is that Chinese leaders judge the US is rewarding India for bad behavior. News analysts said that the reference to "admitting new members by consensus" means that China intends to be involved in shaping any consensus on Indian membership.

The 48-member NSG controls almost all international nuclear trade. Membership enables countries to use freely technology and nuclear material from other nations. If admitted, India would be the only member that is not a signatory to the NPT.

Reaction to the Joint Statement. The Chinese leadership also is displeased by the Indo-US statement by Indian Prime Minister Modi and the US President, entitled the Joint Strategic Vision for the Asia Pacific and Indian Ocean Region. The Chinese government expressed its displeasure with the statement which mentions maritime disputes, referring specifically to the South China Sea. China warned that India should not fall prey to the ulterior motives of the United States.

Comment: By now it is routine for China to react negatively to any discussion of the South China Sea as subject to dispute. The Chinese claim sovereignty over most of the Sea and all the islands and resources. The Joint Strategic Vision also resembles a Cold War-style regional condominium arrangement, whereby the great powers would divide up a region into spheres of influence to avoid competition and minimize confrontation.

The US responded that the US and India both have good relations with China and want any disputes settled peacefully, according to international law. The Chinese deny that international law applies to its internal waters.

Pakistan-India-US: Pakistan's reaction to the nuclear deal was harsher than that of China. On 27 January, Sartaj Aziz, advisor to the Prime Minister on National Security and Foreign Affairs, issued a formal response. He said that admitting India to the NSG with exemptions from the normal membership requirements will disturb the regional power balance. He said the US is supposed to act as an agent of regional stability. This action would have a negative effect on deterrence strategy, he said.

Aziz also stressed that Pakistan is a victim of terrorism and has shown by its action that it is committed to countering terrorism.

"Pakistan rejects any insinuation or aspersion over its commitment to fight terrorism. Condemnation of terrorism in all its forms and manifestations should not be based on selectivity or double standards."

Comment: China and Pakistan have interpreted the US President's visit as a "tilt" to India. The statements imply that the leaders in the two countries judge that the US has switched sides in South Asia.

Ukraine: The Ukrainian parliament, the Verkhovna Rada, approved a statement that named Russia as an aggressor country and named the Donetsk People's Republic and the Luhansk People's Republic as terrorist organizations. The statement called on parliaments of other countries and international organizations also to designate Russia as an aggressor and to increase pressure on it. It called on them also to treat the eastern rebel regimes as terrorist organizations.

Comment: The significance of this vote in parliament is that it bars the Ukrainian government from participating in talks with the representatives from the rebel regions. This is a direct affront to the Russians who insist that the rebels must participate in peace talks. There will be no progress in talks until the latest combat interlude expires.

Fighting. Eduard Basurin, deputy commander of the rebels in Donetsk, said fighters had expelled government troops from Maryinka, a suburb southwest of Donetsk.

He said the eventual goal would be to capture the entire Donetsk region. That would include major population centers in government hands, such as the Azov Sea port of Mariupol. Basurin said there was no offensive against Mariupol under way at present.

Comment: The capture of Maryinka is significant because it represents another expansion of the territory claimed by the Donetsk rebels. Last week, Maryinka housed a Ukrainian military unit. That clash plus Basurin's remarks provide additional evidence that the Donetsk rebel regime is serious about taking control of the entire Donetsk Oblast.

Libya: In Tripoli today, two, possibly more, heavily armed gunmen attacked the Corinthia Hotel, a luxury hotel, killing at least nine people before detonating themselves, authorities said. Mahmoud Hamza of the Tripoli security force told local media outlets that the dead included five foreigners. The US confirmed that one of the foreigners was a US security contractor.

A militant group that claims affiliation with the Islamic State of Iraq and the Levant (ISIL) claimed responsibility for the attack. Local sources, however, said other groups were responsible for the attack so as to embarrass the Tripoli regime.

Comment: The hotel is used mainly by the political elite and foreign delegations and visitors. The prime minister of the Libya Dawn regime in Tripoli was in the hotel at the time of the attack. His supporters fear the attack was an assassination attempt.

At this time, the ISIL connection is unconfirmed. Since last October, a branch of ISIL fighters have controlled the coastal town of Darnah in eastern Libya. However, reports of low level ISIL activities in western Libya have been increasing. If the bombing was the work of an ISIL attack team, it would represent a significant escalation in the scale and scope of its activities in western Libya and a major increase in the terrorist threat.

Mali: United Nations peacekeepers in the northern town of Gao killed at least three people on Tuesday when they used live ammunition to disperse protesters, witnesses told the press. One person said he saw four dead and four injured who had been taken to Gao hospital.

News services reported the violence occurred during a meeting between peacekeepers and local leaders, who were angry about a plan to create a buffer zone in the north between pro-government areas and those under Touareg control. The local leaders argued that the effect of the zone proposal would be to disarm pro-government militias, while allowing the Touaregs to keep their weapons.

People protesting the zone proposal staged a demonstration, which UN soldiers initially tried to disperse with tear gas. A UN spokesman said only warning shots were fired. A Malian military source in Gao told the press, "UN forces panicked and opened fire on the protesters."

Comment: This is the latest in a series of incidents that has made the UN mission unpopular among the people whom the UN mission was established to protect. The UN mission has had difficulty protecting its own soldiers in Mali. Implementation of aplan to disarm local militias would almost invite terrorist or Touareg attacks.