No Thanks to Obama, Kurds Manage to Hold Off ISIS 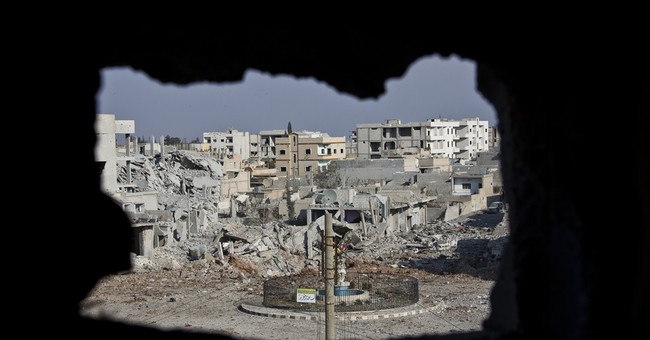 Afghanistan: NATO formally ended its 13-year combat mission in Afghanistan. Commanders lowered the flag during a ceremony in Kabul, raising the flag of the new mission named Resolute Support.

"We have lifted the Afghan people out of the darkness of despair and given them hope for the future," mission commander General John Campbell said.

The statements by General Campbell bespeak an astonishing absence of insight about Afghanistan. Kabul, Ghazni and Mazar-e-Sharif were centers of Islamic learning and culture up to five centuries before Columbus discovered the new world. Before that, Alexander the Great of Macedon founded Qandahar, which is named after Alexander.

It is not clear what "darkness" General Campbell's speech writers thought they were referring to. Campbell's script shows that the US military leadership learned so little about Afghanistan in the past 13 years that the senior US general insulted the Afghan people on the day his primary mission ended. For old Afghan hands, the published remarks are shameful.

The Pashtuns believe the US is the agent of darkness in Afghanistan, provided they even think in those alien terms, which are Greek and Christian. For Pashtun Muslim true believers, the US and NATO brought despair, but their departure is a ray of hope because it affirms the myth that Afghanistan is the graveyard of invaders. The invaders always lose and leave and the Afghan people always win. That myth glosses over the suffering that Afghans endure during the foreign occupations.

Now the real struggle for Afghanistan begins. This is the struggle between Afghans, without Western meddling. The end of the westerners' combat mission marks the beginning of the period that Mullah Omar and his cohorts in Pakistan have waited for: the start of the battle to recapture Kabul.

It is unclear what the residual 13,000 western forces will be doing, if they are not engaged in combat. The most important Western contribution has been air power. News agencies have not reported the status, capabilities and rules of engagement of residual Western air power in Afghanistan. Those capabilities count much more than advisors and trainers.

Syria: The Ba'athist government in Damascus announced on 27 December that it is willing to participate in "consultations" in Moscow for the purpose of restarting peace talks next year to end the Syrian civil war.

"Syria is ready to participate in preliminary consultations in Moscow in order to meet the aspirations of Syrians to find a way out of the crisis," state television said, quoting a source at the Syrian foreign ministry.

Comment: It is not clear what prompted the Syrian offer to talk about peace talks. The Syrians have not mentioned issues or terms. The last peace talks initiative also involved the Russians, almost a year ago.

The proposal for talks seems to imply that the Ba'athists are confident that they can and will hold the Syrian cities in the west. More than half the population lives in the government-controlled cities in western and northwestern Syria.

That means talks will be about control of eastern Syria, where the Islamic State of Iraq and the Levant (ISIL) and its supporters have shown themselves to be incompetent as governors and managers.

ISIL has not responded to the talks proposal. The anti-government opposition seems incapable of presenting a unified negotiating team or position.

As for the Russians, they have the lead as the peacemakers for the Syrian civil war, once again.

Kobani. The Kurds continue to make slow progress against ISIL forces. The Kurds now control more than 60% of Kobani, primarily with the pathetically small number of US air attacks in support.

Comment: The weakness of the ISIL forces may be measured by the small number of daily US and allied air attacks that keeps them from conquering and consolidating northern Syria and northern Iraq. ISIL has no effective air defenses so that a dozen or so air strikes keep its forces on the defensive. ISIL cannot win, but the US appears unwilling to win. Only the French seem willing to put a few airstrikes against the ISIL headquarters at Raqqa in Syria.

The lesson of the Vietnam War is that the US must destroy the enemy's base when it is serious about winning a war. If the US and its allies do not destroy Raqqah in Syria, then they are not serious about defeating ISIL.

A spokesman for the armed forces loyal to the government of Prime Minister Abdullah al-Thinni said the air force attacked Misrata's port, an air force academy near the airport and Libya's biggest steel plant.

Libya Dawn tribal fighters have attempted to capture Al-Sidra and the Ras Lanuf oil terminal since Thursday when they killed at least 22 soldiers in a surprise attack by speedboat. Seven of the 19 oil tanks at Al-Sidra were ablaze on Sunday as a result of the fighting, an oil official said.

Comment: The air force attacked after the expiration of its ultimatum to the tribal fighters from Misrata who attempted to seize control of the oil terminals. One oil official said that Libya lost 1.6 million barrels of oil because of the fires. That is about two days of normal production.

Oil exports of about 800,000 barrels per day have continued despite the political chaos. Most factions have been content to separate the political and military struggle from the business of exporting oil. Lately the Islamist militias from Misrata, who support the Islamist pretenders in Tripoli, have tried to take control of the oil ports for their exclusive use and profit.

That militia offensive prompted the air attacks against their tribal base. The net result of the latest clashes is that no one is profiting from oil production because it is going up in flames as the result of the feckless clashes.

The clashes during the past five days have destroyed two days of oil production and exports, but made no change in the security situation.