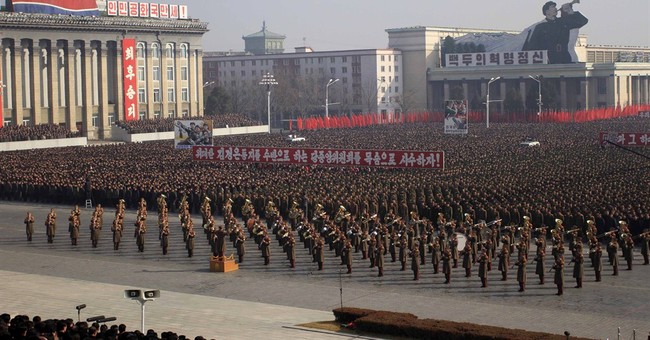 On 23 November, the National Defense Commission issued a statement, only the fifth known to have been issued by the NDC.

"We have already seriously warned of the catastrophic consequences that would be brought about by the United States and its follower forces' human rights commotion against the Democratic People's Republic of Korea (DPRK), which is recklessly spreading."

"Our warning contained the intention of allowing them to cool off their heated-up heads, having gone haywire with confrontation and hostile policy, even if belatedly, and to realize the seriousness of the situation based on reason and to prevent them from committing again an anachronistic crime that challenges justice."

"Nonetheless, instead of thinking twice, the United States, which is habituated to brigandish, evil practices, assembled riff-raffs without their own elementary opinion or principle, and persisted in committing a reckless act of fabricating what is called a human rights resolution on the DPRK, while blemishing the UN arena…."

"The National Defense Commission of the DPRK, with regard to the fact that the United States and its follower forces have adopted an utterly unreasonable human rights resolution against the DPRK, and, still discontent with this, are continuing to behave impudently as if they made us unable to do anything, solemnly proclaims its principled stand as follows:

1.Our army and people totally deny and totally reject the so-called human rights resolution which the United States and its accomplices have fabricated by abusing the UN arena…."

"Our army and people call on the Obama administration to kneel down and make its formal apology before us for the crimes it has committed…."

"The UN needs to seriously recollect the time when our Republic 20-odd years ago sounded the thunder of a nuclear declaration of justice to the whole world to safeguard the supreme interest of the country…."

2.As already declared, our army and people will launch into an unprecedented, toughest countermeasure battle to mercilessly crush the heinous human rights frenzy against the DPRK…."

"The recent human rights resolution, which was coercively passed by abusing the UN arena, is the full revelation of a hostile intention to completely annihilate everything precious to our army and people."

"Human rights precisely mean the sovereignty and national rights of the country in question."

"It is the hardened stand of our army and people to never forgive the vicious human rights racket of the United States and its follower forces. The main culprits of the human rights racket against the DPRK and those involved in it will regret this for a long time…."

3."The United States and its follower forces will have to take full responsibility for the unimaginable, catastrophic consequences to be incurred by the frantic human rights racket against the DPRK…."

"The terrible price of unhoped-for blood should be paid only by those who instigated the menacing situation."

"The United States is a sworn, heinous enemy of our army and people on account of the crimes it has already committed, and thus cannot escape being the first target to be thoroughly annihilated generation after generation."

"Even so, we offered the United States various opportunities to atone for its crimes by turning over a new leaf."

"Some time ago, we treated with magnanimity the high-ranking US officials who came carrying Obama's personal letter, and also showed humanitarian leniency to several criminals of US nationality who were serving heavy sentences for gravely violating the law of the Republic..."

"It is the hardened stand of our army and people to never forgive the vicious human rights racket of the United States and its follower forces.

On 25 November, Pyongyang hosted a large rally at which at least one speaker reminded the US and its Allies that North Korea has nuclear weapons and missiles.

Last week on 18 November, Kim Jong Un's special envoy Choe delivered a letter to Russian President Putin in Moscow in which Kim requested Russian help to "exert influence to ensure the human rights issue will not be raised at the United Nations and in the international community again"

The NDC statement is distinctive for several reasons. It is the first admission in official North Korean media that the Clapper mission took place. What is implied is that the US is an ingrate because the North received nothing for its magnanimity.

The statement also states North Korea's almost unique interpretation of human rights as pertaining to the country and not to its citizens. This resembles an ancient Asian understanding that gave rights to the leader as the avatar of the people, but not to its members. Their rights were derivatives of the sovereign.

The North's view is that the nation has been disparaged, not the criminal family that mismanages it. Readers should expect some display of petulance by North Korea.

Finally, the Army leads almost every statement about victimization. This is a departure for propaganda under Kim Jong UN, and carries more than a hint of "Bonapartism," an arch military crime in a communist state. The NDC statement makes it appear that the communist system is in thrall to the army. While that is accurate, the North usually tries to pretend the Party leads the army and the people.

On 18 November, the UN General Assembly urged the Security Council to request the International Criminal Court (ICC) to investigate allegations against North Korea for crimes against humanity.

The non-binding vote was approved by 111 countries. Nineteen countries, including China and Russia, voted against it. China or Russia might veto any Security Council referral to the ICC.

The vote was prompted by the release in February of a 400-page report by the Commission of Inquiry on Human Rights in North Korea, which detailed numerous and "unspeakable" atrocities committed against the country's people. The report states that the North Korean situation is worse than that of any other country in "duration, intensity and horror."

Comment: This resolution potentially makes Kim Jong Un and his cohorts perpetrators of crimes against humanity. It marks the first time such an accusation has been made by the General Assembly against the North Korean regime.

Each Kim tries to outdo his father in leaving a permanent legacy. The General Assembly resolution against North Korea under Kim Jong Un is something that his father, Kim Chong-il, and grandfather, Kim Il-sung, managed to avoid, though both richly deserved it.

India-Pakistan: News analysis of the 18thsummit meeting of the South Asian Association for Regional Cooperation (SAARC) concluded that the association continues to achieve nothing. The summit was held in Kathmandu, Nepal on 26 and 27 November with hope of progress in regional cooperation because of Indian initiatives.

The Indian government, prodded by Prime Minister Modi, considered this summit an opportunity to move SAARC towards fulfilling its promise of promoting cooperative regional development. India prepared agreements on rail and motor vehicle connectivity and integration of the regional energy grids to share power with countries experiencing shortages. Pakistan blocked these because it had not completed its internal processes, according to Pakistani Prime Minister Nawaz Sharif.

Pakistan proposed a larger Chinese role in SAARC which India blocked because China is not a south Asian nation. Prime Minister Sharif said Pakistan was open to improved relations with India, but Prime Minister Modi was seen reading a SAARC booklet during the speech.

Pakistan is foundering under Sharif, but it refuses Indian offers of cooperation. Similar conditions existed when Sharif was prime minister in 1999, which led to the Musharraf coup d'état. In some respects, history is repeating itself.

Pakistan: Prime Minister Nawaz Sharif has ruled out a withdrawal of the high-treason case against former dictator General (retd) Pervez Musharraf. Pakistani news sources reported that in a high-level meeting on 24 November. The premier was quoted as saying that he did not go for the high treason case against Musharraf for any of his personal grudges but because of what Musharraf did to the judiciary on 3 November 2007.

Comment: On 22 November, the Special Court set up to hear the case against Musharraf ruled that he did not act alone and directed that three other officials must be charged because Musharraf consulted them on the legality of his actions in 2007 when he arrested the Chief Justice of Pakistan, suspended the Constitution and declared a state of emergency. One of the men he consulted serves in the current government as Minister of Science and Technology.

The effect of the ruling is to reshape the case as emerging from the acts of duly appointed or elected officials of the government, rather than the extra-vires acts of a single person. The ruling strongly favors Musharraf because the individuals he consulted were the then prime minister, the then Law Minister and a Supreme Court justice at that time.

Another effect of the ruling is to demilitarize the case. The ruling indicates the Pakistan Army leadership had no role in Musharraf's decisions in 2007.

"Russia condemns the use of extremist groups in efforts to change the regime." He called the US refusal to compromise with Syrian authorities "openly ideology-driven….I would also like to stress: we fully appreciate the Syrian leadership's efforts to guarantee the rights of Christians, who have been subjected to persecution in numerous conflicts in the Middle East."

"This is fundamentally important so that the Middle East and Syria in particular are preserved as states where people of all ethnic groups, of all faiths live with equal rights and in equal security."

"During this meeting, President Putin confirmed the Russian Federation's determination to develop relations with Syrian President Bashar al-Asad, first of all in order to eradicate terrorism, and to strengthen strategic partnership between our countries."

Comment: Once again Russia has seized the moral high ground by endorsing inclusion and diversity, which the enemies of the Asad government explicitly reject. With his usual gift for understatement, Lavrov essentially accused the US of being a supporter of terrorism because it is using terrorists to try to overthrow the Baathist government.