The Peace in Ukraine Will Not Last 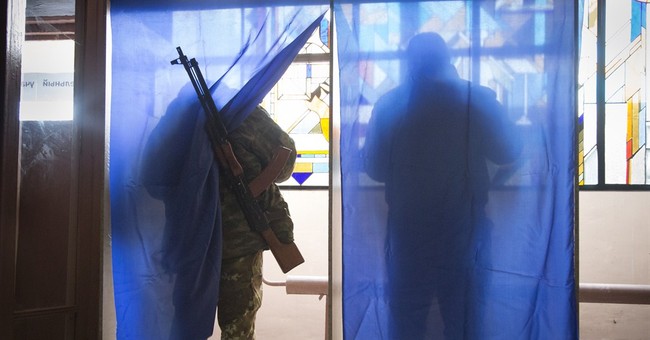 South Korea-North Korea: On 2 November, the South Korean government criticized Pyongyang for threatening to cut off inter-Korean dialogue, including the second round of high-level talks, because of the anti-North Korea leaflet campaigns run by civic groups in the South.

"North Korea claims that we are protecting and supporting civic groups here that are voluntarily sending the flyers, and it is using it as an excuse to say it will pull out of the talks. The North needs to clearly understand these unilateral assertions of threat will not gain them anything."

After reading his statement, Lim said, "We believe the second round of high-level talks have been canceled."

Comment: There is no breakthrough in South-North relations. None looks likely.

Ukraine: On 3 November, Ukrainian President Poroshenko denounced the elections in the Donetsk and Luhansk regions, calling them farcical and pseudo-elections. In a lengthy tirade, he said, "Ukraine persistently adheres to the Minsk protocol. Given the major violation of it by other sides, we have to amend our action plan. I have already discussed today the new situation with the defense minister. Tomorrow I will hold a meeting of the National Security and Defense Council where we will thoroughly analyze the situation and amend the scenarios of our actions, based both on optimistic and pessimistic forecasts"

"One of the issues that I will propose to discuss at the NSDC meeting is the abolition of the law on special self-government in some districts of Donetsk and Luhansk regions. This law played a crucial role at some point in order to stop foreign intervention, mobilize support of the Minsk peace agreements by the world and Ukraine's open intentions to de-escalate the situation in Donbass. We showed Kyiv's aspiration for a political settlement to residents of Donetsk and Luhansk regions and the entire world. Militants rejected this opportunity."

"The pseudo-election torpedoed the law and sharply aggravated the situation in Donbass. We are ready to grant the wide authority envisaged by the law only to legitimately elected local self-government bodies, but not to bandits who crown themselves for reign…."

Luhansk reacts. Ihor/Igor Plotnitskiy, the newly elected president of Luhansk Peoples Republic, presented a statesman-like response to Poroshenko's statement. He said he favors dialogue with the Kyiv government. He thinks the Minsk Accord process is relevant to solving Ukraine's problems and is working. He said he is willing to negotiate within that framework.

In his statement, Plotnitskiy also warned that other regions of Ukraine will seek independence and that "Novorossiya" will expand from the Carpathian Mountains to the border of Russia-across the entire southern rim of Ukraine.

When asked about the prospect of more fighting, he said, "The probability of war exists and is high enough. But whether there will be war depends on how the president of Ukraine can manage the National Guard units, the private battalions and the private military companies' subunits. I have serious doubts whether they will listen to him."

Comment: The excerpts published above present the flavor of the official public exchanges about Sunday's regional elections. Luhansk and Donetsk both consider the elections to be acts of independent states, approved by Kyiv's local self-government law and consistent with the Minsk Accord.

Poroshenko professed outrage, but knew the likely outcome of the elections. He appears to be undecided about his next move, which explains his plan to discuss the elections with his national security council. Polls indicate Ukrainians are tired of fighting and say they do not want to use force to keep the pro-Russian regions in Ukraine. A decree to cancel the autonomy law without enforcement would appear risible, if not petulant.

Comment: This situation is heading for a resumption of fighting. If the self-government law is rescinded, Luhansk and Donetsk will secede. Low level fighting has been a continuous feature of the ceasefire, but would escalate.

If the law is not rescinded, other pro-Russian regions might attempt to take advantage of its promise of local self-rule. Russia appears to be counting on that in building in southeastern Ukraine a buffer against Western influence.

"The elections in Donetsk and Luhansk regions passed off in a generally organized manner, with high voter turnout. We respect the expression of will of the residents of the Southeast. The elected representatives have received a mandate to resolve practical issues to rebuild normal life in the regions."

"Now that the election has taken place, it is very "important to take active steps to establish stable dialogue between the central Ukrainian authorities and representatives of Donbass along the lines of the accords reached in Minsk", the foreign ministry stressed."

"We are willing, together with our international partners, to continue to constructively assist the settlement of the crisis in Ukraine."

On 3 November Russia media reported that a sixth convoy with "humanitarian supplies" is being loaded in Rostov for delivery to Donetsk and Luhansk. It reportedly consists of medical supplies and fuel.

Comment: The Russians are handling the separatist elections cleverly. The Foreign Ministry statement is supportive without extending official recognition. Russian interests are best served by working through the Minsk Accord and manipulating it to encourage other pro-Russian regions to take advantage of local autonomy legislation.

Burkina Faso: The African Union (AU) gave Burkina Faso's military government two weeks to return political power to a civilian ruler or face sanctions. The AU said the Burkinabe army had acted unconstitutionally when it took power over the weekend.

On Sunday, thousands of protesters demanded the military give up power, chanting slogans, including, "The soldiers have stolen our revolution"; "Zida get out!" and "Zida is Judas." One person died from a stray bullet after soldiers fired into the air to try to break up the demonstrations.

Comment: Burkina Faso is one of the poorest states on Earth. It is unable to endure sanctions for long. Zida knows that AU and UN sanctions would destroy the comfortable system of corruption that benefits him.

Some African leaders are impressively slow to appreciate that most African leaders have concluded that the era of military coups d'état must end in order for African countries to attract investors and to begin to crawl out of poverty.

Some leaders just don't get it. They exhibit a tribal chieftain's mentality in countries that have an increasing number of professional people and political activists with advanced degrees from the best universities in the world.Compaore's vision of government was not substantively different from that of Mobutu, Bokassa or Idi Amin. He is lucky to have escaped alive.