Iraqi Officials Give Up on Most of Iraq 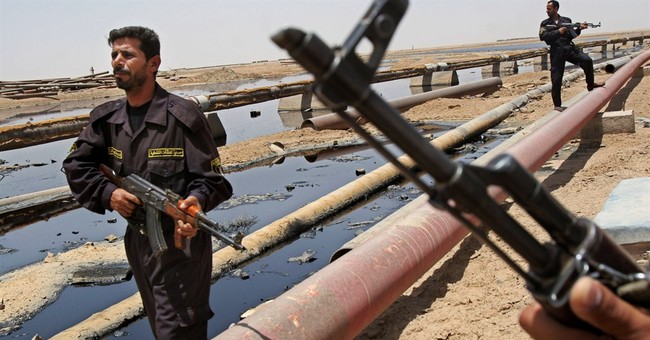 China: Attackers drove a car into a police station in southern Xinjiang and detonated explosives on 21 June. Police shot and killed 13 attackers. Three policemen were wounded.

Afghanistan: The Afghan election commission decided on 21 June to delay releasing the results of the recent presidential runoff election because of protests and unrest.

Comment: The supporters of presidential candidate Abdullah Abdullah released recordings of an election commission memberordering ballot boxes stuffed for Abdullah's opponent Ashraf Ghani. This evidence, if authenticated, could invalidate the run-off election. Under current circumstances, there is almost no way to hold a second runoff election that any party would deem fair.

Iraq: Situation update. The pattern of the attacks by the Islamic State of Iraq and the Levant (ISIL) over the weekend continues to reflect consolidation of gains. After the blitzkrieg attacks of a week ago into the heart of the Sunni governates, ISIL and supporting groups have moved this weekend to control the borders and other towns they bypassed.

In the northwest, ISIL and other anti-government groups managed to take control of Tal Afar airport, after several days of fighting. Tal Afar is on a route from the Syrian border to Mosul.

In the east, fighting centered on the town of Muqdadiyah, where 30 Shiite militiamen died in fighting ISIL. Six civilians died in attacks near the town on Sunday. This town is on the route to Baghdad from the northeast.

Comment: The Iraqi leadership apparently has decided to concentrate its resources for the defense of Baghdad. Thus, it is withdrawing forces from the periphery or cutting those forces off in order to find a defensive line it can hold and conserve resources. For now, the government is ceding the Sunni Arab regions to ISIL.

This is the familiar pattern of a government that is losing the battle. Governments under stress always trade space for time and fall back on the capital, which invariably is the last bastion to fall. That is the seat of power for the unified state.

Government also always intend to take back lost territory, but the military formula that has driven the losses makes that almost impossible without large scale outside assistance that can change the formula. Effective large scale outside assistance usually means tens of thousands of soldiers with their own supply lines who can take and hold ground.

The Syrian fight is relevant because it is one of the examples wherein outside help enabled a besieged central government to take back territory. The military formula for violent internal instability favored the rebels and the forces loyal to Damascus were gradually falling back on defense of key towns, ultimately Damascus. The timely and effective intervention of Lebanese Hizballah forces last year plus some Islamic Revolutionary Guards Corps fighters from Iran changed the force and resource ratios in favor of the government.

The Baghdad power center is determined to take back the territory it lost, but lacks the resources. There is no source of manpower or resources on which Baghdad can draw that would provide a reasonable chance of recovering the lost Sunni Arab governates. The mustering of the Shiite militias should be enough for the defense of Baghdad, but a Shiite army in Sunni Arab land, around Samarra for example, is a prescription for massacres.

The Arbil power center is looking for an opportunity to declare its independence.

This is a partial strategic success for the Saudis and Qatar, both of whom Iranian Ayatollah Khamenei blamed for the fighting Iraq.

Iran: "The United States is trying to portray this as a sectarian war. But what is happening in Iraq is not a war between Shiite and Sunnis," Ayatollah Ali Khamenei said in a statement carried by the state-run IRNA news agency. He blamed the attacks in Iraq on the remnants of Saddam Hussein's regime and extremists.

Comment: Khamenei also said he strongly opposed US intervention. His remarks joined a chorus of Iraqi Shiite leaders who said the same thing.

Egypt: A Court in the town of Minya has confirmed the death sentence for 183 Muslim Brotherhood leaders. It acquitted about 400 of the 683 who were convicted in April.

Comment: This sets in motion the appeals process. According to press sources, all but 110 of the 683 were triedin absentia.

Comment: Most of that reporting took Putin's remarks out of context and misinterpreted the main theme of the Presidential statement posted on the Web.

Putin said he supported the ceasefire as a first step, but repeated his call for Ukraine to stop all military operations immediately because Russia knew that fighting was continuing. In short, Putin accused Ukraine of dissembling.