How Much of a Fight are Iraqi Forces Going to Put Up? 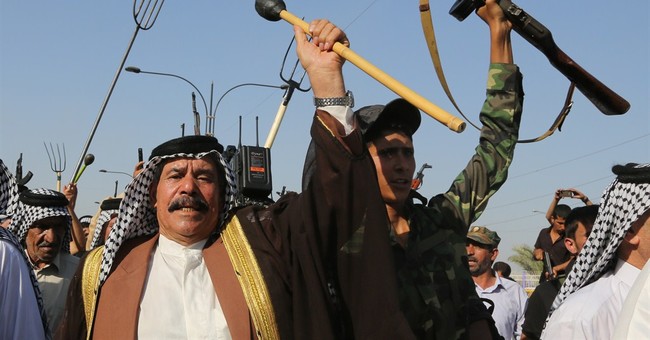 Thailand-Cambodia: Cambodian exodus. The number of Cambodians leaving Thailand exceeds 160,000 and threatens to become a humanitarian crisis. Cambodian authorities are trying to make arrangements to send the returnees back to their home villages.

Comment: A crackdown on illegal workers is part of the martial law program, but documented persons may stay. One of the reasons Cambodians are leaving Thailand is that they fear retaliation for past Cambodian government support for the governments of Thaksin and Yingluck Shinawatra in Bangkok. They likely will return after the intentions of the martial law authorities become clear towards foreign workers.

Sharif said that he was determined that Pakistan would not be a haven for terrorists. He also assured the nation that Operation Zarb-e-Azb was launched after a unanimous decision by the political and military leaderships. He said it would continue until terrorism was eliminated from the country.

The attack at Karachi international airport was a world-class embarrassment for the institutions of government at multiple levels. The Pakistani Taliban attack succeeded in bringing the Army and the government leadership together, despite policy differences, in pursuit of the attackers.

Iraq: Tal Afarcaptured. On 16 June, ultra-extreme fighters of the Islamic State of Iraq and the Levant (ISIL) succeeded in capturing Tal Afar, after a day of fighting. No news outlet has reported casualty figures, but they probably were significant.

Comment: Tal Afar is in northwestern Iraq. It is not on the way to Baghdad. This was an operation to consolidate gains and lines of communications to northeastern Syria. Its loss embarrasses Turkey, which has acted as the protector of the Turkmens in Tal Afar.

Tribal support. The Sheikh of one of the largest Arab tribes declared openly his support for ISIL fighters whom he described as revolutionaries. Sheikh Ali Hatem al Suleiman al Dulaymi, the leader of the Dulaym tribal federation, however, tempered his support by urging the revolutionaries to not kill indiscriminately.

He said, "Tribal forces are capable of eliminating terrorists if Maliki withdraws his forces. We've done it before, we can do it again." He also said only five or seven percent of the anti-government fighters are ISIL. He implied that the majority of the fighters are from the tribes.

Another Dulaymi sheikh said the ISIL attacks are a revolution against the unfairness and marginalization of the past 11 years. Both sheikhs want al Maliki ousted.

A prominent Iraqi Sunni religious preacher also described the ISIL terrorists as revolutionaries and urged the Sunnis to join them.

Comment: The comments by the Dulaymi sheikhs are important because they admit that some Sunni clans of the Dulaymi tribe are collaborating with the ISIL fighters, although they reject their rigid interpretation of Islam. They appear confident that they can stop ISIL, after the al-Maliki government makes political concessions to the Sunnis.

The statements are significant for several reasons. They confirm that the fighting is a manifestation of a multi-dimensional political struggle between Sunnis and Shiites for control of Iraq and its resources. The Sunnis have re-opened the issue of who should rule Iraq. Some powerful Sunni leaders have not given up retaking Baghdad and governing Iraq again.

They also reinforce some media reporting that implies that the threat to Baghdad is not imminent or all that serious. Those judgments seem to explain the behavior of several interested parties, including the US, in withholding support until the al-Maliki government promises political reform and makes political concessions.

The danger in the situation was captured by a Syrian army colonel who said it is easy to underestimate the capabilities of the ISIL commanders and fighters. He said they are sophisticated, tactically astute, and well-armed and supplied. The colonel's remarks are a reminder that a tactical surprise can balloon into a strategic collapse, once forces start running away.

If the Iraqi forces do not start putting up a better fight, there might not be time for deal-making to have any effect. A few fast, deadly ISIL forays into Baghdad could panic its population and collapse its defenses. That almost happened today when an Arab press service reported ISIL was fighting at a Baghdad airport. The report was untrue.

The urgent challenge is military, which means this might not be the best time for political deal-making. The Baghdad government might not last long enough to keep its promises before help arrives.

The Kurds have made a gamble similar to that made by the Sunni tribal leaders. They are taking advantage of the intra-Arab fighting to poach on Sunni lands, but otherwise remain on the sidelines of the fighting, except to keep ISIL out of the Kurdish autonomous region. The prime minister of the Kurdish autonomous region went to Tehran today to consult.

Syrian air support. Over the weekend, the Syrian air force reportedly attacked two ISIL convoys inside Iraq near the town of al Qaim.

Syrian aircraft also attacked the headquarters of ISIL in Syria, in the town of Raqqa, in north central Syria, in support of a government unit that is still holding out in ISIL territory.

Comment: The air attack at al Qaim has been reported by a single news service, but is plausible. Air dominance has been a strategic advantage for the Syrian government in its fight against Islamic extremists in Syria. The Syrian air force is the closest in a position to help the Iraqis. The Iranians can arrange the necessary coordination.

Kenya: A police official said Monday that on 15 June about 50 gunmen attacked two hotels, a bank and a police station in Mpeketoni, a coastal resort town 60 miles from the Somali border and which is popular with Western tourists. At least 48 people were killed.

A statement from al Shaba'ab said the attack was revenge for the "Kenyan government's brutal oppression of Muslims in Kenya through coercion, intimidation and extrajudicial killings of Muslim scholars." It also condemned the "Kenyan military's continued invasion and occupation of our Muslim lands and the massacre of innocent Muslims in Somalia." Al Shaba'ab declared Kenya a war zone.

Comment: This was a complex and well-planned attack. It was timed to catch Kenyans while they were watching World Cup matches. One Kenyan analyst said the attack contained new tactics that appear to have been learned from Boko Haram in Nigeria.

Kenya has about 3,600 soldiers as a component of the more than 21,500 strong eight-nation peacekeeping mission in Somalia, called AMISOM. One or more Al Shaba'ab groups is striking outside Somalia because tribal infighting and AMISOM pressure has degraded its capabilities inside Somalia, according to the National Counter Terrorism Center.

Local press reported that villagers in the farming community of Daku, in Borno state, described how they were surrounded by at least 20 gunmen who fired indiscriminately and threw gasoline bombs, engulfing the market in flames.

"Sunday is normally a market day and people from neighboring villages had gathered at the local market in Daku when the insurgents laid siege," said one local witness. "Scores of people escaped with bullet wounds while dozens of shops, stalls, houses, vehicles, motorcycles and assorted foodstuffs were set ablaze by the rampaging attackers."

Comment: Extremist groups have always shared tactical knowledge, such as techniques for making primitive, effective bombs. Now they appear to be sharing knowledge that hit-and-run attacks and random acts of savagery heighten the terror effects, even without explosives.