China Gets Tough on Terrorism 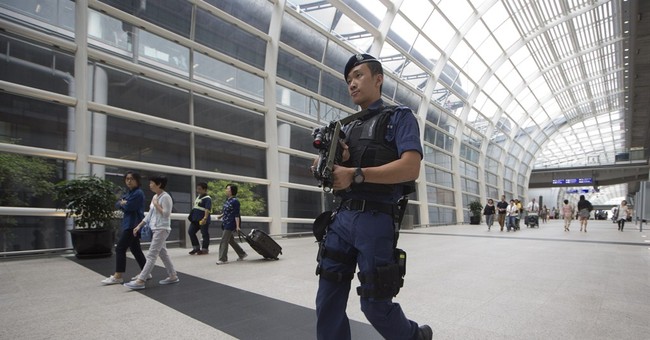 The crimes included organizing, leading or participating in terrorist organizations; murder; illegal manufacture or storage of explosives; and making and distributing audio and video tapes on terrorism, inciting hatred and teaching criminal behavior.

Comment: This indicates the crackdown continues. The harsh punishments are intended to serve as a lesson and a deterrent.

China-Philippines: The Philippine government told the press that it has confirmed that China is engaged in land reclamation operations on 2 more reefs in the Spratly Islands in the South China Sea.

The 2 reefs -Gavin Reef and Cuateron Reef -- are close to Johnson South Reef, where the Philippines reported Chinese reclamation activity in May.

A Philippine military spokesman said China already has erected structures on the 2 reefs.

Comment: The Chinese appear to be making a string of manned, if not fortified, islets to back up their claims to sovereignty with physical presence. When they are finished, the reefs will have been re-engineered to Chinese requirements.

Syria: Feedback and a correction: Multiple Brilliant Readers pointed out that the Syrian vote count was inconsistent with the Syrian population figure taken from the CIA World Factbook. The Readers are correct and the Factbook's population total for Syria is wrong.

NightWatch relies on the CIA World Factbook as a standard reference for unclassified factual, baseline information, as does the Intelligence Community. On three occasions since 2006, NightWatch has found errors in the Factbook.

This was the third occasion. Prompted by Feedback, NightWatch consulted six separate sources for the total population of Syria. They agreed that it is between 22 and 23 million people, not 17.9 million as indicated in the CIA World Factbook. There are about 7 million Syrians under voting age of 18 and more than 15 million registered voters.

Readers also disputed whether this was a democratic election and whether the votes were coerced. While those issues are important, they are tangential to the threat analysis. The NightWatch threat analysis is that the election reinforced the judgment that the Ba'athist government is not in danger of collapse.

Nigeria: Update. Suspected Boko Haram militants launched an attack today on a village near the north-eastern city of Maiduguri. The armed men told villagers they had come to preach. After a crowd gathered, they fired into the crowd, killing about 45 people.

Mali: On 4 June, President Keita's government has decided to require six-month's of universal, compulsory national service, beginning in 2015. A communique said the government wants "to develop a feeling of patriotism and the instinct for national defense."

Training will include military discipline,weapons familiarization and apparently civics.

Comment: Mali analysts interpret the measure as a long term response to the latest Touareg uprising. The Touaregs routed the army near Kidal last month. This is not military conscription, which exists in Mali, but appears to be selective. This is a program to build a stronger sense of national identity in the youth.

While it will be expensive and might not work, the idea at least responds to a condition in many states with security problems. Tribal identity remains much stronger than national identity.