Afghanistan Violence Heats Up as US Troops Remain in Region 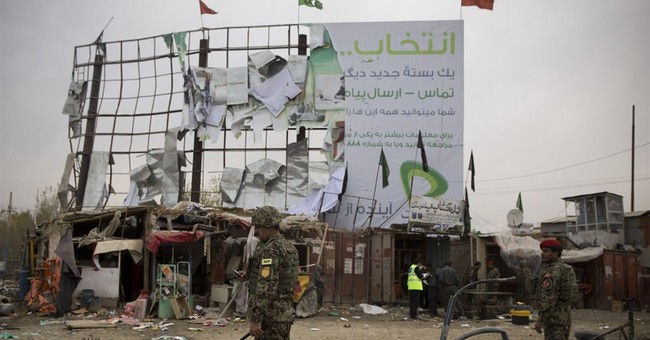 Comment: India is at a decision point involving its sense of identity. The two aircraft carrier fleet is one of several metaphors for a great power vision of India's role in international affairs. Other metaphors also are military connected, including acquisition of intercontinental supersonic bombers and intercontinental ballistic missile forces. India has not yet made the decision about its leadership role past 2025.

India does not yet have the economy to support the role of a great power, but it is achievable with political and economic will. The need for a strategic decision is not yet pressing, but the discussion continues. The Indian Navy does not yet have two carrier task groups, but expects to have them after 2018 when the first Indian-built 45,000 ton carrier is in service.

According to Interior Minister Chaudhry Nisar Ali Khan, "the government had asked the Supreme Court to establish a special panel to try General Musharraf on accusations that he subverted the Constitution in late 2007 when he imposed emergency rule and fired much of the judiciary."

Comment: In a separate court proceeding, Musharraf has requested permission to travel to Dubai to visit his ailing mother. He might be allowed to go. This would create conditions potentially for Musharraf to be tried in absentia.

Musharraf in 2007 declared an emergency on his own authority during which he suspended the constitution and had Chief Justice Chaudhry arrested, shortly after Chaudhry and the Supreme Court declared Musharraf's actions unconstitutional. Musharraf is prima facie a constitutional criminal.

The larger constitutional issues involve the political inclinations of the generals in the Pakistan Army. Something is wrong in their training that produces the idea that generals think they can overthrow constitutionally elected governments, which they have done for half of Pakistan's history.

The treason proceedings are intended to instruct the Pakistan Army that the days of generals taking the law into their own hands have ended. It might take some time, but consequences will follow ineluctably.

Afghanistan: A suicide car bombing outside a university in central Kabul killed at least ten people over the weekend. The blast occurred shortly after Afghan President Karzai "announced a draft agreement with the US allowing American troops to remain in Afghanistan" following the planned withdrawal of combat forces next year.

The next step in the process is approval by the Loya Jirga. Some 3,000 tribal leaders "will begin meeting Thursday to discuss" the Bilateral Security Agreement. Assuming the Loya Jirga approves, the agreement still requires final approval from parliament, Karzai said.

Comment: The bombing sends a warning against voting for the draft agreement. Any leader who votes for the agreement is a target for assassination.

A second issue is whether American soldiers are protected from legal action when they kick down the doors of Afghan houses in pursuit of Taliban and their sympathizers. Afghans cede no such rights.

These are fundamental points about which no agreement has been reported. The bombing represents an inducement to vote against the draft agreement which papers over the toughest issues.

Syria: News services reported government successes in three areas over the weekend. Most significant is near Damascus where government and allied fighters recovered five towns which had been held by the opposition.

Lebanese sources reported an influx of Syrian refugees from the government's al-Qalamoun offensive in the mountains east of northeastern Lebanon. Lebanese Hizballah fighters are engaged in this offensive thrust.

The third region is near Aleppo. Opposition sources claim that the opposition fighters and armed gangs have ordered compulsory military service for all males over age 18 in areas under their control.

Comment: The Asad government is sufficiently confident of its control of the security situation that it is willing to participate in peace talks in Geneva. The opposition is not. Its order to impress all military age males in Aleppo is a strong indicator of recent setbacks.

Libya: Today, the Defense Ministry in the Interim Government announced to all citizens, and especially the residents of Greater Tripoli, that, by orders from the Defense Ministry, a number of national army units would be entering into the city of Tripoli from several directions, in order to deploy and secure the city.

The government called on all citizens to comply with these units, and to provide all facilities in order for the units to perform their task to the fullest. Let us join forces with our national army to achieve security and stability.

Comment: After days of clashes between tribal militias and Tripoli residents protesting the lawlessness of the militias, the government sent in national army soldiers, themselves little more than another militia. It is not clear what tribe the national army represents.

Clashes between militia and protesters in Libya on Friday resulted in the death of at least 31 people. Fighting broke out "after militias reportedly opened fire with machine guns on protesters calling for their exit from Tripoli.

The law and order situation appears to have stabilized for now. Still, Libya is broken, with two regions in de facto secession and the region around Tripoli a periodic battleground for powerful militias.

NightWatch is brought to you by Kforce Government Solutions, Inc. (KGS), a leader in government problem-solving, Data Confidence® and intelligence. Views and opinions expressed in NightWatch are solely those of the author, and do not necessarily represent those of KGS, its management, or affiliates.