Terrorists From Pakistan Step Up Violence Against Nato Troops in Afghanistan 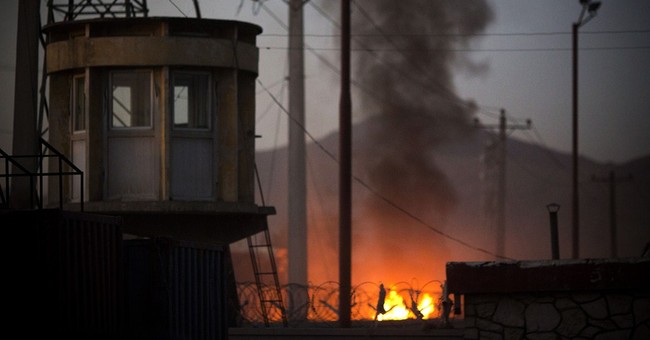 Afghanistan: Government security forces recently intercepted one of the largest truck bombs ever built, a massive "vehicle-borne improvised explosive device," or VBIED, packed with some 61,500 pounds of explosives. The Hino heavy cargo truck was stopped as it crossed into Afghanistan from Pakistan south of Peshawar. Hino Motors is owned by Toyota.

According to the press accounts, Afghan and US sources claimed the truck belonged to the Haqqani network which is responsible for almost all major bombings in Kabul and in the eastern provinces that border Pakistan, where the Haqqani syndicate is based.

The news sources suggested that a likely target was the US military's Forward Operating Base Goode near Gardez City. According to Afghan sources, the driver was a Pakistani who set off a grenade in the cab of the truck. He was taken to a nearby hospital where he detonated a suicide vest and killed himself, officials said.

News sources reported no other casualties from the detonations.

The audacity of the attempt is more impressive than the fact that authorities discovered the truck. This attempt is significant for several reasons. First, it is a monumental act of defiance of Afghan security. Second, the truck could not have come as close as it did to Gardez without significant help by Pakistani and Afghan border guards or paramilitary forces. The truck was stalled on the side of the road, apparently, when the Afghans found it.

Despite 12 years of NATO operations and ostensibly elaborate cooperation with the Pakistanis, the Haqqanis continue to operate with impunity and apparently still enjoy the protection of Pakistani military intelligence.

Iran: Update. President Ruhani has banned Iran's morality police from harassing and arresting women considered to be dressed immodestly. The curb on power of the Gashte Ershad (Guidance Patrol) is the fulfillment of an election promise to loosen strict standards in Iran's Islamic dress code for women.

Nevertheless, it is not a complete victory for women's rights. Ruhani tasked the Interior Ministry with maintaining standards for women's attire. The difference, the Minister said, is that the dress code will no longer be a matter of law enforcement. It will be enforced by a "social council."

Comment: According to the press, Iran's Guidance Patrol was part of a collaboration of 26 government agencies, including "morality police" units as well as volunteer enforcers who are especially unpopular with many Iranians.

Ruhani originally pledged that Iranian women would be protected from "harassment" and would be able to "enjoy real security." Apparently Ruhani can stop arrests, but not harassment. No source explained the operations of a "social council."

Iran-IAEA: In its latest quarterly report, the International Atomic Energy Agency (IAEA) reported today that Iran has not expanded its nuclear facilities in the last three months. The Agency reported only four new uranium enrichment centrifuges were operating at Iran's Natanz plant and no additional machines at the Fordo facility.

It added that Iran also has not begun operating any new-generation IR-2M centrifuges and that "no major components" had been installed at a reactor being built at Arak.

"There is absolutely no technical reason for this freeze," according to one diplomat. "This is clearly a choice…

"They haven't introduced uranium to any new centrifuges in the last three months. They have more or less frozen construction of the IR-40, major components are still missing."

Comment: A temporary suspension of nuclear activity is a vintage negotiating tactic that Ruhani used when he was in charge of nuclear negotiations in 2003. It was a confidence building measure, he said then, to improve the atmosphere for negotiations. Negotiations in Geneva are scheduled to resume on 20 November.

It did not then and does not now signify Iranian agreement to halt or even curtail its nuclear energy programs. Official statements to the Iranian parliament in Tehran during last week's negotiations in Geneva restated yet again Iran's right to enrich uranium and construct the Arak reactor which will be capable of producing plutonium after it becomes operational, for peaceful purposes.

Iraq: For the record. Attacks mostly against Shiites, including a suicide bombing that ripped through a religious procession, killed 67 and wounded 152people in Iraq Thursday. Thursday was the climax of the Shiite religious observance known as Ashura.

Comment: Bombing attacks against Shiites during Ashura have become annual feature of the observance.

Qatar: The government has approved a draft law for compulsory male military service for up to four months, according to press reports on Thursday.

Under the proposed legislation, the first of its kind in Qatar, all men between 18 and 35 years of age must serve in the military for three months for graduates and four for those who have not graduated.

Comment: Qatar has armed forces totalling about 11,600 personnel and relies on the Peninsular Shield Force (PSF) of 40,000 soldiers to augment its defense. The PSF mission is to deter and to respond to military aggression against any of the Gulf Cooperation Council member states. The six members are Bahrain, Kuwait, Oman, Qatar, Saudi Arabia, and the United Arab Emirates. A PSF intervention force was deployed in Bahrain to prevent a Shiite overthrow of the government in March 2011.

The purpose of the new law is to form a trained reserve force, which eventually could total up to 600,000-men after the program becomes fully operational and provided it is truly universal for the male cohort of military age.

The Kuwaiti parliament is debating a bill for the restoration of compulsory military service, cancelled after the Iraqi army invaded the emirate in 1990 and occupied it for seven months.

Comment: Qatari and Kuwaiti sources have not explained how many men they expect to train annually or the final target size of the reserve force. More importantly no source has speculated about the reasons the leaders of the two states judge they now need large reserve forces. The formation of trained reserves is a contingency military preparation only required in anticipation of war at some time in the future. It does not imply that war is likely, much less soon, but it does manifest a leadership appreciation of a need to improve national military readiness because of uncertain future security conditions that could include the threat of war.

Syria-Kurds: Islamist groups in northern Syria are weakening after months of fighting and Kurdish militias are gaining ground, a top Syrian Kurdish leader said on Wednesday.

Saleh Muslim, head of the Kurdish Democratic Union Party (PYD), said in an interview that Tuesday's announcement of an interim Syrian Kurdish autonomous administration in northeastern Syria is only a provisional measure until the end of the Syrian fighting. Muslim said he would only join the Geneva talks if there was a separate Kurdish delegation.

Muslim said, "About 3,000 of those Salafists have been killed. At the beginning they were strong, but now they aren't so strong….We have found no allies and paid for our own bullets."

Muslim admitted, however, the PYD had received aid, money and weapons from the Iraq-based Kurdistan Democratic Party and Patriotic Union of Kurdistan as well as the Kurdistan Workers Party (PKK), which fought for greater Kurdish autonomy in Turkey for three decades.

Comment: Syrian Kurds number about two million people or 10% of Syria's population of 22.4 million, according to the CIA World Fact book. More than 25 million Kurds are dispersed among Syria, Turkey, Iran and Iraq.

The pro-Western and the jihadist groups reject the formation of an autonomous Syrian Kurdistan region. Nevertheless, one of the ripple effects of the Syrian fighting has been to galvanize the long-oppressed Syrian Kurds into taking action to defend their territory in northeastern Syria.

Muslim's admission that his group receives aid, money and weapons from other Iraqi and Turkish Kurds is significant because usually Kurdish leaders are more circumspect about linkages to other Kurdish regions, particularly the prosperous and highly autonomous Iraqi Kurds. None of the leaders of states with large Kurdish populations wants to see a Kurdish nationhood movement emerge.

For now, the Asad government owes the Kurds for preventing the jihadists from seizing northeastern Syria, as they have tried for much of the summer.

Egypt-Russia: During the visit by a high-level Russian delegation, Foreign Minister Nabil Fahmy tried to play down speculation that Egypt was considering replacing the US with Russia, as its major military benefactor. He did it in a back-handed way when he said, "Russia's weight is too heavy to be a substitute for anyone…"

"We look forward to cooperation with Russia in multiple fields and that is because of Russia's significance in the international arena," Fahmy said at a news conference. "We look forward to strong, continuous and stable relations with Russia. We seek to energize a relation that is already in existence."

Comment: Russian Foreign Minister Lavrov led the highest ranking delegation to visit Egypt in years. It included Defense Minister Sergei Shoigu. Visits by delegations of this rank and composition take months to arrange. Thus, it would be a mistake to link it to a specific recent action that has stressed US relations with Egypt.

Rather this visit represents a Russian attempt, certainly at Egyptian invitation, to poach on the US relationship. Fahmy's comment about Russia's weight implies the idea of counter-weight, vice substitute. The Russians are investigating what Egypt needs and wants.

The Egyptians are not tired of the US relationship, but they are weary of being told what kind of political system they must have to satisfy the Americans. For that reason alone, a renewal of an arms relationship with Russia is likely over time.

While introduction of Russian equipment will complicate military logistics, many countries that buy US weapons have alternate sources of weapons, precisely to blunt outside political pressures. For example, Pakistan's alternate arms supplier is China. India buys advanced weapons from Russia and France as well as the US. Even Turkey is diversifying some of its weapons by buying Chinese. It is not sound military logistics, but it is good political strategy.