What is Really Behind Egypt’s Violence? 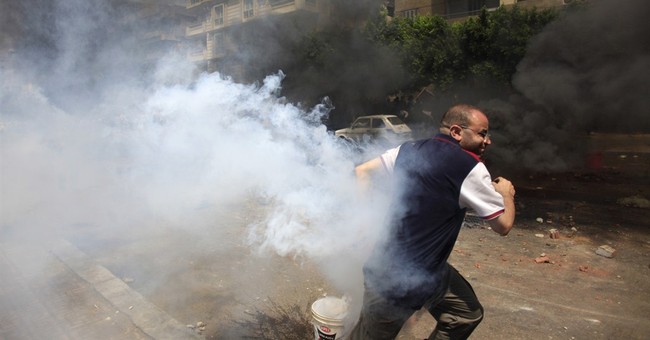 Egypt:Police used tear gas to disperse pro-Mursi supporters in a demonstration march in Cairo. The purpose of the march was to protest the appointment of 25 new provincial governors, most of whom are army or police generals. No governors appointed by Mursi remain in office. Two governorships are not yet filled.

The pro-Mursi marchers were confronted by residents along the route who called them "terrorists." That's when the rock and bottle throwing began, leading to the police intervention.

During subsequent clashes one person was killed and ten injured and some store fronts were smashed.

Comment:Security remains a high priority for many reasons, including revival of the economy. Consolidation of the chain of command to the provinces to ensure reliability and responsiveness is an essential step in preparations to stop the anti-government protests.

No baseline for gauging economic or political progress can be established until civil order is restored. It is noteworthy that the Mursi administration and the military-backed Mansour administration are relying on Mubarak's tactics for dealing with an uncompromising opposition. The situation continues to move slowly towards more and moreviolent confrontations.

France welcomed the election of a new president as vindication of its decision to intervene in order to stop the Islamists and terrorists from fragmenting the state.

Comment:The election ends for now the interregnum of the military junta, but by no means signifies that the security situation is stable. Some 500 to 1,000 rebels and terrorists eluded the French and African forces. While a large UN peacekeeping force is charged with maintaining security, the rebels will challenge its capabilities over time. The North African franchise of al Qaida has not given up on its plans to establish a base in Sahelian Africa.

Aircraft carriers:feedback.A Brilliant and well-informed Reader reminded that Spain and Italy also have built aircraft carriers, making a total of seven builders. A search of the web indicates that nine navies have aircraft carriers and most have trouble doing so. Another Brilliant naval warfare expert and Reader calls them "big targets." Feedback welcome.