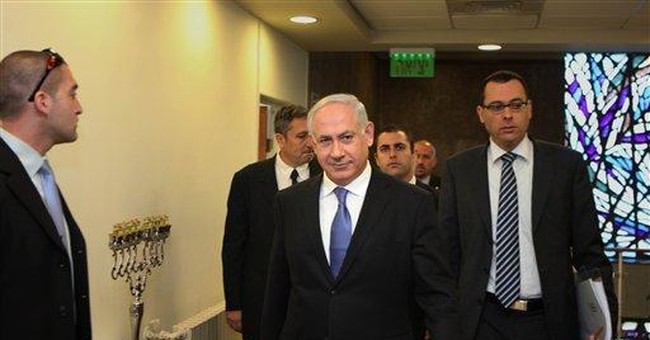 At a meeting of European think tanks several years ago, Israeli Prime Minister Binyamin Netanyahu described a training exercise for new soldiers in the Israeli Defense Force. Recruits would have to run across a field carrying their partner on their back – and then switch positions, so that the original runner would be carried on the way back. How do you think the two times compared when the partner on top was overweight?

We learned recently that the Troubled Asset Relief Program cost $200 billion less from than the $341 billion originally projected, which the administration seems to consider a slush fund that can be use for “job creation.” In a speech delivered at the Brookings Institution, the President called for the “leftover” money (borrowed from future generations, but who’s counting) to be redistributed to his preferred industries in the name of spurring job creation. Of course, giving out $200 billion is also a great way to make friends and influence people – just ask Louisiana Sen. Mary Landrieu.

The job creation proposals currently on the table are little more than a thinly-disguised income transfer scheme, which would do nothing to stimulate long-term economic growth while adding billions to the national debt (currently at a staggering $12 trillion). In 2009, interest alone on the debt totaled $202 billion, and is expected to exceed $700 billion in 2019, according to the Office of Management and Budget. Expanding government programs that add to the debt only digs our nation into a deeper hole. The more we borrow, the more costly our debt will become, particularly as interest rates rise. On December 8, credit rating agency Moody’s Investors Service stated that worsening public finances in the wake of the global financial crisis may “test the AAA boundaries.” Already, American children born today inherit a $44,000 debt. Do we want to leave a legacy like that – or worse?

To be fair, not all of the President’s speech on job creation was bad. He proposed a tax cut for small businesses to encourage hiring, and called for a one-year elimination of capital gains taxes on them. But these temporary programs, whose scope will be limited by government bureaucrats, are not a long-term solution to a floundering economy. With the nation facing a 10% unemployment rate, it’s time to close the political favor factory and focus on real, sustainable reform. Americans need to understand that these programs are worse than just wasteful, they are a drag on the economy, discourage sustainable growth and job creation, and thereby hit the pocketbook of every American family.

If the President were really interested in creating sustainable jobs, he wouldn’t continue to add bulk to the government, which the private sector has to carry.

The President can start by defunding new programs like “Cash for Caulkers,” the forthcoming green jobs/ home weatherization boondoggle. For too long, the federal government has played the role of Santa Claus, doling out cash and contracts for things it has no business interfering with. That must end. And Obama must address the ticking time bomb of the nation’s entitlement programs, whose staggering insolvency threatens to take down the whole economy. It’s time to put the federal budget on a diet.

If the President were really interested in creating jobs, he would truly bulk up the private sector, so that it will be strong enough to carry its partner and not stumble when times are tough.

Obama needs to reduce the cost of hiring workers for good – not just temporarily. He could start by reducing payroll taxes, and paring back government mandates for benefits such as paid vacation and sick leave, which disproportionately hurt part-time and minimum-wage employees. He can truly unleash the power of the nation’s innovators, small businessmen, and entrepreneurs by allowing them to compete on a level playing field with their competitors – not favoring certain providers or industries by doling out subsidies to some while kneecapping others with burdensome regulations. Cutting the capital gains tax for one year is good, but a permanent cut would be much better. Taxing the changed value of an asset – which is oftentimes due to inflation – is a tax on success, which the U.S. used to celebrate.

In the President’s job-creation speech, he stated “That foundation for sustained economic growth must be our continuing focus and our ultimate goal.” Obama may be able to create a few jobs now with more spending, but ultimately the President's proposed tax-and-spend policies will be a disaster for the U.S. economy. The nation cannot afford to finance the pet projects of the President's friends on the backs of hardworking American taxpayers. It's time to rein in the size of government and increase the private sector’s muscle. That's the only way the United States will be able to compete internationally in the long run.