Nicholas Waddy
|
Posted: Oct 19, 2019 12:01 AM
Share   Tweet
The opinions expressed by columnists are their own and do not necessarily represent the views of Townhall.com. 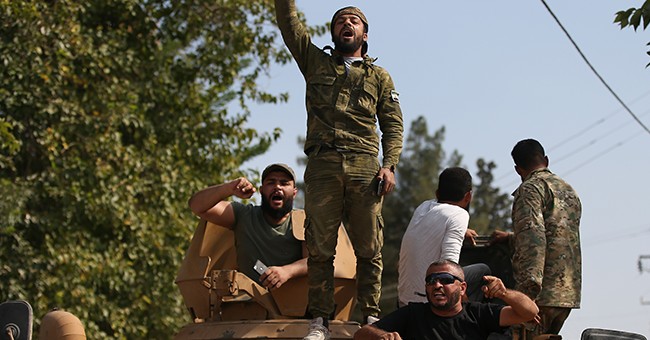 Democrats, talking heads in the media, and even most establishment Republicans are united in their condemnation of President Trump's decision to withdraw U.S. troops from the border area between Syrian Kurdistan and Turkey. Trump has “betrayed” a faithful ally, they say, destabilizing the region and emboldening dictators in Turkey, Syria, and Russia. How dare he?

The fact is, however, that the conventional wisdom in Washington, D.C. is wrong. U.S. intervention is not a panacea that can fix any international problem, and the time has come for U.S. forces to leave Syria and let the Syrian people decide their own destiny.

President Trump's only mistake lies in the timing of his decision. A phased withdrawal from eastern Syria, begun when Trump first announced his decision to pull out in December 2018, would have mitigated some of the negative consequences we see now. But that America does not belong knee-deep in Syria's civil war has been clear from the start.

First, we should consider the disingenuousness of many of the arguments advanced against Trump's withdrawal. Democrats and Republicans are saying that it is wrong to pull support from a trusted ally. Many of these Democrats, and some of the Republicans, were opposed to U.S. involvement in the Vietnam War...and yet the U.S. withdrawal from South Vietnam precipitated a bloodbath, and consigned many of America's closest friends to a miserable fate, sometimes worse than death!

Moreover, the U.S. was fighting alongside the South Vietnamese for years, on a much greater scale than we ever fought in Syria, and almost 60,000 Americans died in the conflict. Surely, then, our moral obligations to the South Vietnamese, and to fallen American soldiers, greatly exceeded any duty we may now feel to help the Kurds maintain their autonomy on Syrian soil. But the cacophony of voices criticizing President Trump sees no hypocrisy in its support for withdrawal from Vietnam — and in many cases for the 2011 withdrawal from Iraq as well — versus its determination to stay put in Syrian Kurdistan.

Consider also that the media is showcasing civilian casualties in Turkey's new “safe zone” in northeastern Syria, in order to justify U.S. intervention to protect the Kurds. The fact is, though, that as many as half a million people have died in Syria's civil war. Over 12 million have been displaced. In terms of scale, therefore, what is happening right now on the Syria-Turkey border is a sideshow compared to the tidal wave of misery and death that has washed over Syria since 2011. The D.C. establishment and the media know-it-alls, however, never advocated large-scale U.S. intervention in Syria's civil war to end the bloodshed. That is because human suffering is not the real reason for intervention, either now or then. The powers-that-be are ganging up on Trump, and critiquing his decision to leave northeastern Syria, not to “save women and children,” but because it is a convenient way to buttress the agenda of interventionism, which many D.C. politicians and reporters believe in implicitly and unthinkingly. It is also a fun and easy way to make Donald Trump, super-villain, look bad. In other words, for the Washington elite, it's a twofer.

As weak and self-serving as the arguments against President Trump's decision to withdraw may be, we have to acknowledge that ending U.S. protection of the Kurds does subject them, and the region, to certain risks. Americans must weigh these risks, though, against the risks borne by U.S. servicemen every day in Syria, where a handful still serve. The battlefield in Syria is complex and extremely dangerous. ISIS was our principal enemy there, and it was — and is — notorious for its extreme brutality. Many of the other forces in Syria, however, including the Kurds, can be just as unsavory.

Moreover, every second that U.S. forces remain in Syria creates more potential opportunities for conflict between our servicemen and women and the armies and air forces of the Syrian government, of Iran, of Turkey, and of Russia. The Syrian conflict, in short, is a tinderbox, and we have been fortunate that we have not yet been burned, in a major and dramatic fashion, by our decision to wade into that quagmire. Make no mistake — if we stay in Syria, and especially if we stay there indefinitely, as the D.C. elite wants, we run the risk of being pulled into a much wider and deadlier conflict, and one which ultimately advances no vital American interest whatsoever.

The time has come, therefore, for the U.S. to pull out of Syrian Kurdistan, totally and permanently. Only if a global threat like ISIS reemerges should we ever contemplate returning.

Syria, then, will be, and should be, ruled by Syrians. The Syrian Kurds will need to make accommodations with the Syrian government, as they are now doing, and with the Turks. That is the only way that they can preserve their autonomy in the long run.

The days of the U.S. military fighting the Kurds' battles for them are over.