The Decline (and Fall?) of Angela Merkel Is a Warning Sign for Immigration Apologists Everywhere

Nicholas Waddy
|
Posted: Oct 01, 2018 11:50 AM
Share   Tweet
The opinions expressed by columnists are their own and do not necessarily represent the views of Townhall.com. 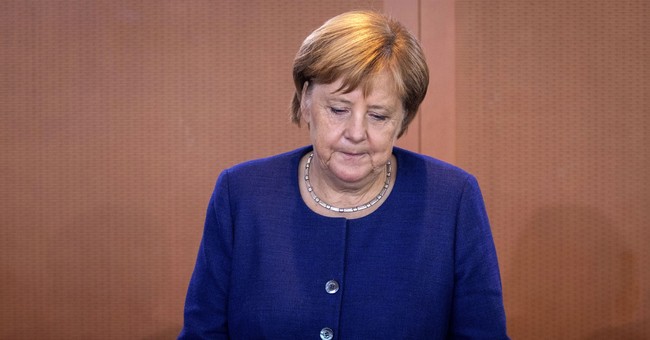 Ever since German Chancellor Angela Merkel allowed her country to be inundated with over a million refugees, or alleged refugees, in 2015-16, her political star has been fading. At the time, Merkel famously downplayed worries about the scale of the migrant deluge, and dismissed all criticism of her reckless policy, with her remark that Germany “can manage”. Her enemies never forgot her imperious disdain, and they are now lining up to plunge the final dagger in her back. She remains Germany's Chancellor, for now, but many analysts are calling this the “beginning of the end” of the Merkel era.

In 2017, the Christian Democratic Union (the CDU), the governing party that Merkel leads, was only able to hang on to power by forming a coalition with Germany's socialist party: the SPD. Now, though, Merkel's standing even in her own party is in doubt. Her hand-picked candidate for a parliamentary leadership position was defeated by an upstart challenger. Moreover, German polls indicate that support for both the CDU and the SPD, Germany's two main establishment parties, is flagging, while support for the “Alternative for Germany” (AfD), a right-wing, anti-immigration, and Euroskeptic party, is rising.

The AfD promises to reverse Merkel's welcoming policies towards refugees, and it aims to uphold Germany's political and economic sovereignty vis-a-vis the European Union. The AfD's widening base of support, moreover, comes despite the party's controversial links to other right-wing and nationalist groups, despite the unanimous scorn that Germany's political elite has poured on it, and despite considerable confusion and instability in the party's own leadership.

What is the lesson of Merkel's fall, and the AfD's rise? It is this: traditional, mainstream politicians ignore the anger of the public on issues like immigration and national sovereignty at their own peril.

Chances are that, if Angela Merkel had enforced Germany's borders and turned away the flood-tide of “refugees” flowing into Germany in 2015-16, the CDU probably would not have needed to form a coalition with German socialists in order to remain in power, because its popularity would not have flagged in the first place. Likewise, the AfD would not have become Germany's official opposition, because its anti-immigrant message would not have been relevant to most Germans. In other words, Germany's elite could have prevented a populist, anti-immigrant backlash simply by listening to the German people and enforcing the country's immigration laws more strictly and sensibly. Instead, Germany's leaders buried their heads in the sand.

Of particular relevance to the 2016 election, lost by Obama's ally and unabashed illegal immigration apologist Hillary Clinton, Obama could have greeted the waves of “unaccompanied minors” and “refugees” appearing at the U.S border in that pivotal election year with a stern policy of quick repatriation. That would have been not only fully consonant with his responsibility to uphold American sovereignty, but it would also have been in the interests of many of the migrants themselves, who risked their lives trying to reach the U.S. border because of their belief that soft-hearted Obama would welcome them with open arms. And welcome them he did, to a point, with a policy of “catch and release” that not only allowed “refugees” to stay in this country unsupervised, but helped transport them within the country wherever they wished to go.

In the process, Obama outraged many law-abiding Americans and fed a narrative that the Democratic Party supported “open borders” and was oblivious to the ill-effects created by the migrant wave. In short, Obama handed an issue to the Republicans that would fire their electoral base with unprecedented enthusiasm. And what was the result of President Obama's shortsightedness – his Merkel-esque imperiousness in dismissing the qualms of his countrymen about unchecked immigration? Donald Trump was elected the 45th President of the United States, and much of Obama's handiwork was steadily undone as America lurched, very predictably, to the right.

The question is: when will our mainstream politicians learn? When will they figure out that their attempts to block meaningful immigration reform and enforcement, to demonize ICE, and to stymie the construction of President Trump's Wall on the border with Mexico, only serve to keep the issue alive for conservatives, patriots, and those who believe in the rule of law? When will they realize that the very legitimacy of our legal system of immigration is threatened by our inability (and unwillingness) to contain illegal immigration? When will they recognize that the righteous anger of the American people on the issue of illegal immigration cannot be solved with politically correct posturing, or by labeling anyone who supports immigration enforcement a “racist” or a “fascist”?

One wonders, given the continued intransigence of our political elite on questions of immigration and national sovereignty, whether the sad fate of Angela Merkel presages a similar destiny for the Trump-hating elitists and immigration apologists, mostly Democrats, in this country. The people have spoken when it comes to illegal immigration, after all. It is therefore time for establishment politicians to become part of the solution...or to step aside and let others lead.

Dr. Nicholas L. Waddy is an Associate Professor of History at SUNY Alfred and blogs at: www.waddyisright.com. He appears weekly on the Newsmaker program on WLEA 1480.