Nicholas Waddy
|
Posted: Jul 20, 2018 12:01 AM
Share   Tweet
The opinions expressed by columnists are their own and do not necessarily represent the views of Townhall.com. 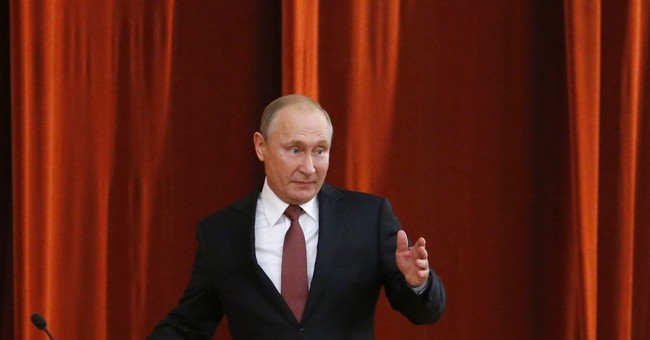 The Democrats and the mainstream media have enjoyed, it must be admitted, spectacular success in convincing a large domestic and international audience that U.S. politics has become a serialized version of the 1962 Hollywood classic The Manchurian Candidate. That is to say, they have convinced about half the country and most of the world that Donald Trump is nothing more than an animatronic puppet remotely controlled by the super-villain Vladimir Putin. The hard evidence? Trump has some nice things to say about Putin, he's been to Russia, and he once employed someone (Carter Page) who occasionally spoke to Russians. Case closed: treason verified.

What's even more astounding is that a majority of Democrats are convinced that the Russians “hacked” voting machines in 2016 and thus manufactured Donald Trump's victory. There is nothing, apparently, that those wily, ruthless Russians can't do when they set their minds to it.

For those who are inclined to take such nonsense seriously – and a great many intelligent people apparently do – I have good news. Russia does not pose anywhere near as great a threat as you have been led to believe.

First, despite the journalistic hyperbole, Russia's role in the 2016 election was marginal, at best. Assuming that all the claims made by U.S. intelligence agencies are true, Russia spent about $100,000 on its notorious Facebook ads attempting to boost Trump and sow discord among American voters – in a year when around $1 billion was spent promoting the major party candidates (the Clinton camp spent twice as much as Trump). Russian ads were thus a drop in the bucket.

Moreover, if the Russians did indeed hack John Podesta's emails and the DNC, and then handed over the damaging material therein to Wikileaks, they were merely a) releasing information which was true, if unflattering to Democrats, and b) producing a modest ripple in the tidal wave of propaganda and disinformation that washed over American voters in 2016. There is no evidence that either Russian ads or Russian hacks had a material impact on the outcome of the election, or that the Russians ever seriously believed that they could, by their shenanigans, choose who would be the next president of the United States.

Second, while the Left and the mainstream media are doing everything in their power to frighten the American people with tales of Putin and Russia's cruelty, guile, and boundless ambition, the truth is that Russia is a pale shadow of what it was in Soviet days and represents less of a threat to U.S. interests than either China or Islamic terrorism.

Russia, when it was the Soviet Union, killed tens of millions in a crazed effort to impose Marxist tyranny on the entire world. (In those days, it must be said, leftists found Soviet ideals rather charming.) Russia today, by contrast, is not the scene of mass murder, nor is it the headquarters of a world-straddling and hostile empire. Russia's tentacles do reach abroad, yes, but one has only to visit the beleaguered cities of Damascus, Caracas, Grozny, or Donetsk to find out what a mixed blessing Russian patronage is. Only in zones of chaos and among the truly desperate, in other words, is anyone tempted to make common cause with a has-been superpower.

Putin's “bold moves” on the international stage, moreover, should be seen for what they are: a tacit admission of weakness. Putin has invaded Georgia, only to withdraw. He has destabilized Ukraine, but lacked the resources or the will to intervene in favor of a pro-Russian president ousted in a coup in 2014. He has sent troops to fight with Bashar al-Assad's government forces in Syria, but, when his own men are killed by American or Turkish fire, he responds only with chiding words. This is not the behavior of a “strongman.” It is the behavior of a weak leader pretending to be strong. We in the West must learn to tell the difference.

Lastly, even if we concede that Putin is attempting to reconstruct a portion of the old Soviet empire, and has the ability to intimidate many countries weaker than our own, the fact remains that the Russian threat must be placed in proper perspective. Economically, the Western alliance of the U.S., Canada, the E.U., and Japan outclasses Russia in GDP by a factor of 25 to 1. Even Russia's historic advantage over its foes – sheer manpower – has been nullified by the country's fragmentation and low birth rates. Russians now must be paid to reproduce, in fact. Only in terms of nuclear weapons and manned space exploration can the Russians make any justifiable claim to ongoing superpower status, and their country strains mightily to fulfill even these scaled-down commitments.

The truth is that the Russian bear long ago became a paper tiger, whose only asset (besides oil) is its ability to trade on its past reputation as a global hegemon. That is another way of saying that Russia today relies on bluff to sustain its international prestige and influence. The Left and the media, though, are working hard to persuade the people of the world that this strategy of bluff equates to a serious campaign to achieve global dominance. The Left and the media are thus puffing up Putin and the Russians far more effectively than they could ever do themselves. In that sense, it is liberals who are doing the work of Putin, not Trump.

Be that as it may, reports of the death of the West are greatly exaggerated. The truth is that we retain more than enough power and unity to deal with an emasculated Russia. Only the media's hyperventilation makes it appear otherwise.