Elon Musk Needs to Dial Down on His Galactic Ambitions

Nicholas Waddy
|
Posted: May 19, 2018 12:01 AM
Share   Tweet
The opinions expressed by columnists are their own and do not necessarily represent the views of Townhall.com. 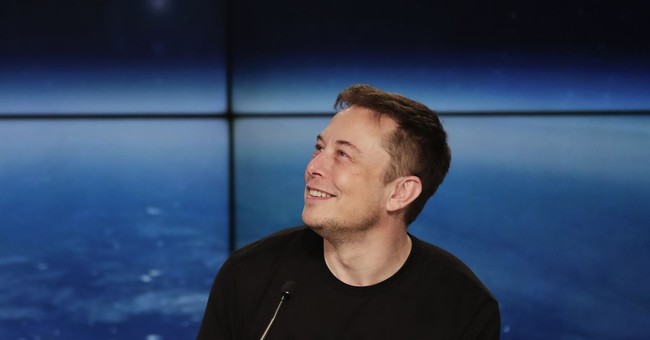 During his sunset years, the great American inventor and entrepreneur Thomas Edison invested a great deal of time and energy in a project that he felt sure would be not just profitable, but essential for U.S. national security. Along with Henry Ford and Harvey Firestone, in the 1920s and 30s he sponsored botanical research into finding an alternative source of rubber. His reasoning was simple: at the time, rubber came from Europe's colonies in Africa and Asia, and from countries in Latin America. It was therefore possible that, in a major war, the U.S. could be cut off from foreign supplies of rubber, which was a critical resource for modern industry. Edison therefore labored night and day to identify a new source of rubber that could be grown on U.S. soil.

Edison succeeded. He determined that something akin to rubber could be derived from the Goldenrod plant. Unfortunately, however, his efforts were in vain. For one thing, the U.S. was never very likely to be cut off from foreign rubber, because it was Britain's Royal Navy that ruled the seas, and thus, unless the U.S. went to war with Britain, the rubber would continue to flow. More importantly, the Depression drove down the price of rubber, and, at almost the same moment that Edison settled on Goldenrod, another alternative source of rubber was discovered. The DuPont chemical company began to produce synthetic rubber. Not for the first time, Edison had come up short: he had produced an ingenious invention for which, unfortunately, the world had absolutely no need.

The story of Edison's misadventures with the Goldenrod plant demonstrate that even brilliant men – veritable wizards of technology – often get it wrong: they place their bets on the wrong lines of research, or they misconstrue what society needs or wants. Sadly, Elon Musk, the celebrated tech sector Wunderkind, is in serious danger of making the same mistake.

Musk is justly famous for his numerous initiatives aimed at pushing the envelope of technological innovation. Tesla, his company that produces electric cars, is beloved among the wealthy and eco-friendly, but Musk has struggled mightily to produce an electric car that would be affordable and practical for ordinary people. SpaceX, Musk's attempt to privatize and revolutionize space transportation and exploration, has succeeded in capturing a large percentage of the market for launching satellites (thanks in part to a cozy relationship with the federal government), but it has yet to launch humans into space, and it is a long way from achieving Musk's goal of a human colony on Mars. Moreover, as Musk's projects have become more numerous and ambitious, failures (like exploding rockets and missed deadlines for the delivery of the Tesla Model 3) have piled up, as have the debts of his companies. Musk, it seems, is a remarkable and visionary man, but he is not a miracle worker.

The latest sign that Musk may be overreaching is his “Starlink” project. No, Musk isn't proposing to build a bridge between the sun and the nearest star (that project is no doubt still in the planning stages). Instead, Starlink involves launching over 4,000 satellites in order to provide satellite-based broadband internet access to the entire planet (that's Earth, in case you've lost track). The grandiosity of the concept is breathtaking. Readers should stop to think of the tremendous investment in orbiting high tech infrastructure that such a project would entail. Musk is proposing to launch a fleet of satellites greater in number than all the other satellites currently in orbit. It's hardly a surprise that the timeline for Starlink has already been pushed back. Not only are the costs and technical challenges prohibitive, but arguably Musk's efforts are both unnecessary and redundant.

Why unnecessary? Because most of the world's people who desire broadband internet access already have it, and companies and governments are already hard at work all over the world to extend broadband coverage to the few areas that lack it. There are, simply put, simpler and cheaper ways to bridge the digital divide.

Why redundant? Musk is not the first person to think of providing broadband internet access via satellite. Existing companies already provide this service to many areas and customers, so there is no need for a global, integrated network of satellites. In addition, foolhardy as the concept may be, it is already being pursued by another eccentric billionaire: Richard Branson. His parallel project is called OneWeb. Boeing and Samsung are discussing similar ventures. It would be a shame indeed if Musk were to heave four thousand satellites into space, only to see them transformed into space junk because someone had beaten him to the punch.

My advice for Mr. Musk is this: you have enough on your plate building electric cars, colonizing Mars, and now (apparently) blasting Californians through pneumatic tubes. At some point, despite your genius, you must recognize that you and your companies are limited by what is financially and technologically feasible. We need you, and people like you, to dream big, and to reach for the proverbial stars. However, we also need you, and people like you, to keep your feet on the ground. Starlink is a bridge too far. Let discretion be the better part of valor, Mr. Musk, and let this flight of fancy go.