Nicholas Horton
|
Posted: Oct 24, 2019 10:20 PM
Share   Tweet
The opinions expressed by columnists are their own and do not necessarily represent the views of Townhall.com. 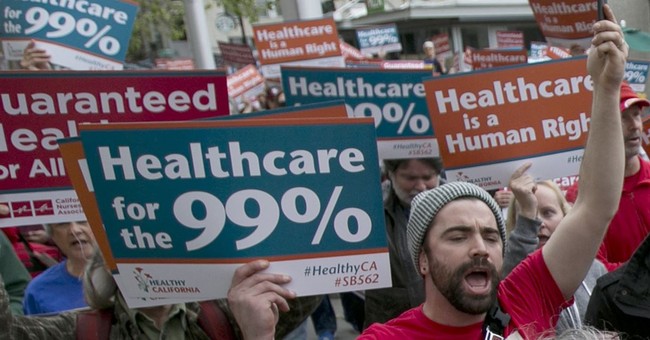 In 2013, the Arkansas legislature voted to expand Medicaid to able-bodied, childless adults through ObamaCare. One of the primary motivations behind this decision—if not the primary factor—was the hope that expansion would save hospitals from certain demise. But after nearly six full years of expansion and hundreds of thousands of able-bodied adults added to welfare, Arkansas’ hospitals are still struggling—and many of them have closed.

This comes as no surprise to those of us who can plainly see that expanding welfare doesn’t create jobs or bolster economic activity. (Indeed, it does quite the opposite.) But still, these hospital closures simply cannot be overlooked, especially as more states consider whether or not to bring this same nightmare home.

Just this week, news reports out of Arkansas classified the health of the state’s hospitals as “condition critical.”

Last week, one of the largest hospitals in the state announced layoffs.

In September, the CEO of the Arkansas Hospital Association said 2018 has been “a tough year” for smaller hospitals financially and expressed concern that some rural hospitals in the state may be approaching closure.

In August, a large hospital in central Arkansas—the only hospital in the Little Rock suburb of Jacksonville—shuttered its doors, resulting in layoffs and leaving local residents without quick access to an emergency room.

Then the largest hospital in the state, Baptist Health, reported a $21 million operating loss, after posting a net loss of $30 million the year before.

In January, reports emerged that DeQueen Medical Center in rural Arkansas was on the verge of shuttering as well, as payroll checks arrived late, practitioners began leaving, and some services were discontinued. It closed in February and now local residents are being forced to fork over  more tax dollars to pay for a new facility—on top of the billions taxpayers are already paying for expansion, which was supposed to save hospitals on its own.

In June of last year, another hospital in rural Arkansas reported a $2 million loss, and UAMS, the largest state-run hospital in Arkansas, laid off 600 positions.

But here’s the thing: this was never supposed to happen. Arkansas, my home state, was supposed to thrive after Medicaid expansion. We were promised a thousand new hospital jobs, higher tax revenues, and a chicken in every pot. Instead, here we are—layoffs, closures, and a massive new welfare program that we are paying to prop up.

And as I’ve traveled the country and worked on the issue of Medicaid expansion in other states, I’ve seen that other states are being pitched the same bill of goods that we bought.

This isn’t a story that the media establishment is interested in telling. They’ve never met a welfare expansion they didn’t like and the real story about what’s happening in Arkansas undercuts their narrative. But this is a story that needs to be told.

Local hospitals are critical to our communities and the health of our neighbors. But it’s a fool’s errand to think that ObamaCare expansion is the cure for what ails them.

At a recent hearing on Medicaid expansion in Missouri, a representative of the local hospital association testified that expansion would be “better than nothing” for hospitals. After spending billions on Medicaid expansion over the last several years in Arkansas and seeing these results, I’m confident he’s wrong.