Norquist: I Welcome NRA's Inquest Into Beck-Gaffney Charge That I Am a Terrorist 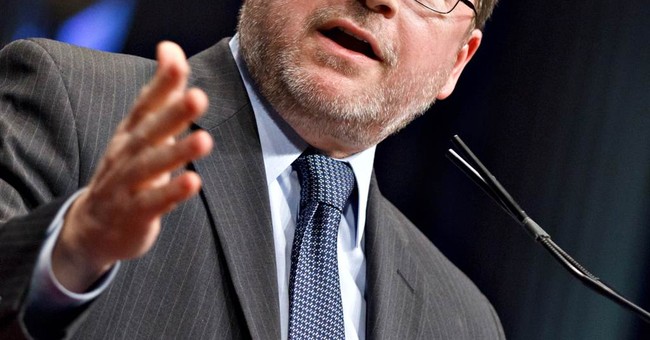 “I think it would be great for the NRA to put a stake through the heart of this at the end of the day,” said Norquist on the March 15 broadcast of the national gun rights program.

On Beck's March 11 program, Frank Gaffney, the founding president of the Center for Security Policy and a former national security aide to President Ronald W. Reagan, accused Norquist of being an agent of influence for the Muslim Brotherhood. At the time, Beck told Gaffney and his listeners that he was very concerned. “I am not an expert on this by any stretch of the imagination, but I heard enough.”

Norquist said to Walters whenever someone reaches a level of prominence in Washington, he is assigned a stalker and Gaffney is his stalker. “In the last 15 years, he has gone around blaming all of life's problems on me.”

Gaffney has accused Norquist of being a terrorist, a homosexual and a member of the Jewish-Russian mafia, he said.

Every few years, Gaffney gets ahold of someone like a Beck, who falls for his narrative for a time before snapping out of it, he said. “All of the grownups in D.C. have realized how silly it is.”

Beck doubled-down on his March 13 show. Having hedged on Wednesday, he was convinced on Friday that if Norquist was reelected to the NRA board, he would resign his lifetime membership.

Beck tried to steady himself with a twisted metaphor: Norquist is the Wizard of Oz.

In Beck-world, Norquist is at once a fantasy potentate, who does not have real power and influence in Washington, and perhaps a very, very bad man.

“He is Oz and it is very sad,” he said. “We did our own research. I don't believe he is out to destroy America, but his efforts, his work will lead to the destruction of America.”

Goodness. This are the angry ramblings of a troubled man, who is not talking about an Islamic State commander, but rather the man asked by Reagan to form a citizen-centered group dedicated to cutting taxes, who co-wrote a book “Debacle: Obama's War on Jobs and Growth and What We Can Do Now to Regain Our Future” with John R. Lott Jr., author of the landmark book, “More Guns, Less Crime.”

Methinks, there is another game afoot—other than Beck saving America from Norquist.

Two weeks ago, Beck lost two key men at The Blaze, Chris Balfe, who had been his right-hand man for more than a decade and Joel Cheatwood, who helped develop the look-and-feel of Fox News and left Fox News with Beck in 2011. As those two build their own media venture, Beck promoted Betsy Morgan to be the CEO of his Internet channel, theblaze.com.

Morgan, a former investment backer, was in-charge of the left-wing Huffington Post before joining theblaze.com in 2011, herself.

Beck and Morgan have set up a multi-stage publicity stunt. First, they play the blue-on-blue theme with the kind of conservative fratricide that guarantees coverage in Morgan's former site and all the other left-wing outlets.

Then, comes the March 22 deadline for ballots in the election of the NRA board, followed by the NRA board results. Does Norquist get reelected? Will Beck quit the NRA?

The way I figure it, the Beck-Morgan script climaxes with the results of the NRA investigation. When the NRA gives Norquist a clean bill of health, Beck with swollen, tear-drenched eyes resigns his lifetime membership in the NRA.

Can there be a more perfect storm for the mainstream media?

If it plays out correctly, Beck-Morgan will not only achieve a classic media frenzy, it might be enough to land theblaze.com on some cable systems or bought out before all the money disappears.

Otherwise, Beck-Morgan will have to cancel more shows, cut loose more personalities and eventually shut off the lights on what turned out to be the Pony Express of web-based channels.

Oh, what about Grover Norquist?

Luckily for conservatives and America, Norquist has a healthy sense of humor and a robust self-esteem. Norquist will continue to fight the good fight long after this Beck-Morgan stunt hits its sell-by date.