no child left behind
Opinion

Ding, Dong, No Child Left Behind is Dead…Or is It?

Neal McCluskey
|
Posted: Jan 07, 2016 9:55 AM
Share   Tweet
The opinions expressed by columnists are their own and do not necessarily represent the views of Townhall.com. 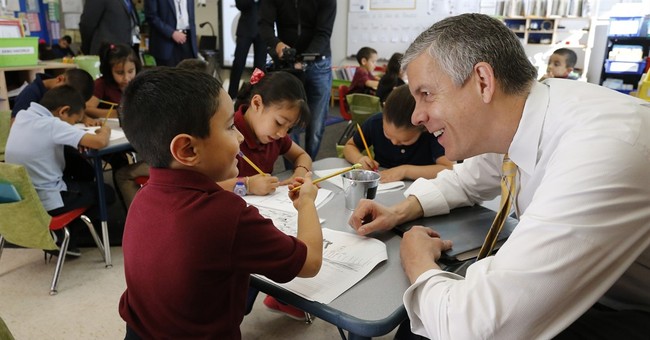 2015 came to a close with something many people thought they’d never see: The end of the No Child Left Behind Act, the federal education law that no one seemed to like, but that was long overdue for replacement because no one could agree on how to change it. Finally Congress and the Obama administration did agree, and to the delight of many conservatives NCLB was replaced with the Every Student Succeeds Act, a statute that appears to end federal micromanagement. Or does it?

While the law says a lot that seems to rein Washington in, it leaves open several opportunities for major federal influence.

The ESSA probably is an improvement over NCLB. Most notably, it eliminates NCLB’s “adequate yearly progress” nucleus, which subjected schools to increasingly stringent punishments if, say, this year’s fourth graders did not get better scores on state tests than last year’s. The ESSA also prohibits the U.S. Secretary of Education from mandating that states use the highly contentious Common Core curriculum standards. The Core was not part of NCLB, but Washington pushed it with both funding and waivers to escape many of NCLB’s demands.

These are welcome provisions, but they hardly make the ESSA, as the American Enterprise Institute’s Frederick Hess and Elizabeth English recently put it, “a smashing educational triumph” for conservatives. Rather, the ESSA may largely just do a better job than its predecessor of masking Washington’s influence.

The crux of this shadowy power is in three words: “challenging” and “much greater.”

The first is the requirement that, to get ESSA funds, states must adopt “challenging” academic standards and assessments. Who gets to judge what constitutes “challenging”? State plans must be approved by the Secretary of Education, which seems to put the ball squarely in Washington.

But the law prohibits the Secretary from conditioning funding on the use of “specific instructional content, academic standards and assessments, curricula, or program of instruction.” So he clearly cannot influence standards or tests, right?

Wrong. While the Secretary cannot require a “specific” set of standards or assessments, he can, it appears, reject whatever states offer up that he deems not challenging. In other words, he is unable to tell states specifically what to use, but is empowered to say what they cannot employ. So he could control standards and assessments by veto.

These “challenging” standards and tests could also be forced into a federally shaped, test-centric accountability framework. While adequate yearly progress and its cascade of punishments are gone, the ESSA requires that the lowest performing five percent of schools face state interventions. It also allows states to use multiple measures of school success, but requires that “much greater” weight be placed on academic measures such as test scores than non-academic concerns such as school climate. Ultimately, regulation writers at the U.S. Department of Education will decide what “much greater” means in practice.

Even with these problems in the legislative language, it may still seem farfetched that the ESSA might actually empower micromanagement. But if we have learned anything over the last few years it is that policymakers will exploit whatever openings they can to assert power.

Indeed, one of the major things that finally brought left and right together on the ESSA was anger over conditions that the Obama administration attached to NCLB waivers, such as requiring that states use “college- and career-ready” standards, and evaluate teachers in part on their students’ state test scores. These demands came despite NCLB giving the Secretary no authority to attach conditions to waivers and, in effect, make law all by himself.

Then there’s this: From Day One of the Elementary and Secondary Education Act – of which NCLB and ESSA are just the most recent permutations – federal education law has contained some version of the following provision: “Nothing…shall be construed to authorize an officer or employee of the Federal Government to mandate, direct, or control a State, local educational agency, or school's specific instructional content, academic achievement standards and assessments, curriculum, or program of instruction.”

Of course, mandating, directing, and controlling is exactly what we have seen, and there is good reason to worry the ESSA will continue it.