Pathetic Dreamer: Obama’s Doublespeak Are Lies Meant to Fool Himself 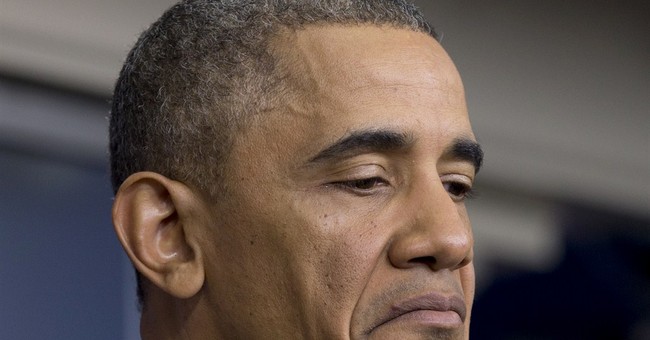 “The power of holding two contradictory beliefs in one’s mind simultaneously, and accepting both of them, to tell deliberate lies while genuinely believing in them, to forget any fact that has become inconvenient, and then, when it becomes necessary again, to draw it back from oblivion for just as long as it is needed, to deny the existence of objective reality and all the while to take account of the reality which one denies–all this is indispensably necessary. Even in using the word doublethink it is necessary to exercise doublethink. For by using the word one admits that one is tampering with reality; by a fresh act of doublethink one erases this knowledge; and so on indefinitely, with the lie always one leap ahead of the truth.”

In his brilliant dystopian novel, 1984, George Orwell perfectly and presciently described the kind of doublethink and doublespeak we have now come to expect of our modern politicians:

I don’t know about you, but I am sick of being jerked around by this administration. I feel like I have been whipsawed this past week and my head is spinning.Things were bad enough with the disastrous Obamacare rollout and the millions being thrown off of their health insurance plans.We were all trying to calm the rocking boat, sit down and try to make some plan for the future, whatever that might be, when wham!...we were hit smack in the face with doublespeak and more chaos from Barack Obama.

To save his Democrat party members that were being skewered by their constituents over this disaster, Obama turned the entire Obamacare law, insurance companies and American people on their heads once again! In an abrupt “oops, sorry, I didn’t mean to say that I didn’t mean what I said the first time” speech, he double talked his way through a press conference and basically told everyone that what he had said before; “if you like your health plan, you can keep your health plan…period” was actually what was going to happen now.If your policy had been cancelled, it was magically going to be reinstated just like nothing had ever happened.It was all a bad dream.

Are you still with me?

No one was able to figure out how he was going to accomplish this feat of magic, but he hoped that by throwing this out there the American people would be calmed and appeased, therefore taking the vulnerable Dems in the 2014 elections out of the frying pan.Really?We’ve seen this movie before and we know the story.This whole thing was a political stunt and everyone; even the low information voters know it.

There is no way that the insurance companies can do this.Not only have they spent the last three and a half years figuring out this transition, sending out notices and getting ready for the millions of new people that they have to insure, but they are still trying to keep from being demonized and taking the blame for all of this!

Obama made one thing clear in his double talk speech; if the insurance companies won’t reinstate your plans for another year, don’t blame Obamacare.Once again the blame is not on him, he had nothing to do with this.Realistically the insurance companies can’t reinstate these policies.It would be an administrative nightmare for one, and it would be against the law for another. The premiums would “necessarily skyrocket” so your old plan wouldn’t be your old plan anyway.Plus, the jury is still out on whether or not Obama can even do this according to the Constitution!

It was a quick political fix.One more game that this administration has played with the American people and also the insurance companies that thought they were in the cat-bird seat with Obamacare.

Don’t cry for the insurance companies though.With the rushed meeting held on Friday with insurance CEO’s, I’m sure Obamas doublespeak assured them that if they take a significant hit from this, he will make sure that they get bailed out.We the taxpayers will be on the hook once again for the reckless decisions being made and the Presidents “fat cat cronies” will benefit.Same story—different day.

My prediction is that this thing will implode anyway.That was the plan from the start and it is on the trajectory toward disaster.Obama just has to keep jerking us around and keep up the game playing and double talk until after the 2014 elections.If he wins the House back for the Dems he can throw out Obamacare and push a simpler law through, thus fulfilling the 100 year liberal dream of socialized medicine.