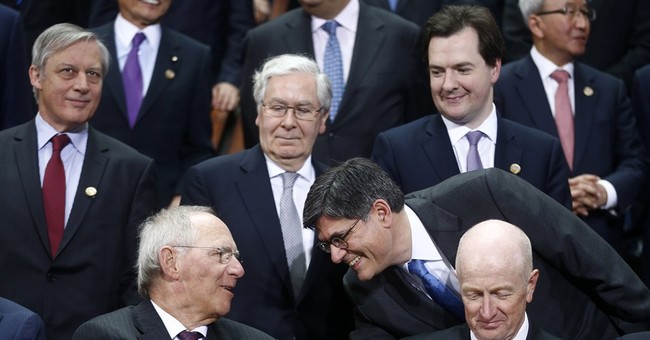 If I ran my finances like the Federal government I would either be bankrupt or in jail.  It never ceases to amaze me how creatively corrupt these people are.

A little known story that got absolutely no coverage from the mainstream media surfaced last week about the reports from the Treasury Department’s Financial Management Service.  The FMS reports both the Daily Treasury Statement and the Monthly Treasury Statement. According to these reports the federal deficit rose by $98 billion dollars in July, but somehow the federal government’s debt remained exactly the same at $16,699,396,000,000 for the whole month.

Hmmm…how does that happen?  Well, it seems that Treasury Secretary, Jack Lew got a bit creative and magically decided to stop the addition of more debt from showing up in the reports.  Wow, don’t we all wish we could do that?  Let’s say at the beginning of the month our bank balance was $3000.  Throughout the month we spend money, write checks, go out to dinner, and then magically at the end of the month our bank balance is exactly the same as when we started!  $3000!  Sounds good until you realize that the only way to achieve that is to “cook the books”.

When you delve deeper into what the Treasury Department did, you see that there is a magic number of $16,699,421,000,000 to reach the debt limit set in a law passed by Congress and signed by the King himself.  Isn’t it odd that the number reached when the clock stopped ticking was about $25 million below the limit?

If the clock had continued to click, by the end of July it would have gone over the legal debt limit and would have been in violation of the law.  However, according to the Monthly Treasury Statement for July, even though money was spent, their reports didn’t show a change in the debt by even one penny.  Isn’t that the definition of “cooking the books”?

When it became apparent that the debt was going to exceed the limit, Jack Lew sent a “cover my behind” letter to Speaker John Boehner explaining that he was going to take “extraordinary measures” to prevent the Treasury from exceeding the legal limit on the Federal debt. This massaging of the numbers has been going on for months now. Why doesn’t Boehner ask any questions and why does he let Lew and this administration get away with manipulating the numbers?

This is just another way to circumvent Congress.  Lew knows that he doesn’t have to explain anything, he just does it.  There will be no pushback from Boehner or Congress.  To them, this type of juggling figures is perfectly normal.  So Lew says that these “extraordinary measures” will provide another $260 billion to give them headroom, but who knows if that hasn’t been spent already?

Do they really think we won’t notice that the clock stopped ticking? Well, some of us anyway.  If this is their MO, “cooking the books” and manipulating the numbers at their whim, how much is the debt really?

Let’s just call it what it is.  It is a blatant lie to the American people about how much trouble we are in.  They can play these games for awhile, but sooner or later this whole thing is going to implode.