Mona Charen
|
Posted: Mar 20, 2020 12:01 AM
Share   Tweet
The opinions expressed by columnists are their own and do not necessarily represent the views of Townhall.com. 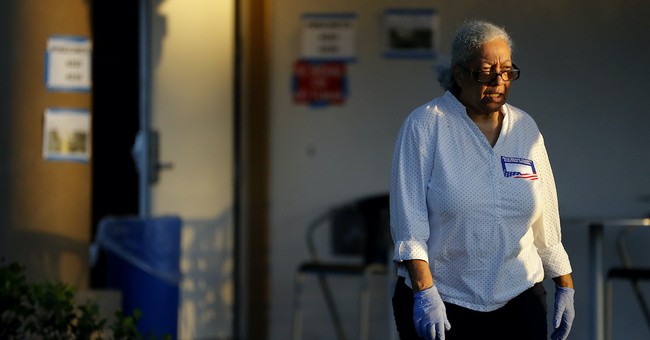 We are facing one discrete problem in the mass of chaos surrounding this pandemic that we can and must address immediately -- the security of November's election.

Voting in the traditional way requires us to do the very thing that epidemiologists and public health authorities have forbidden us to do -- gather in large groups for prolonged periods. That's inevitable when you must wait in long lines to vote.

In Ohio, Governor Mike DeWine decided to postpone his state's primary election citing the health emergency despite a judge ruling that he lacked the authority to do it. The State Supreme court blessed DeWine's action, but only after it was a fait accompli.

It's possible that by November, the coronavirus will be nothing more than a bitter memory. But that seems unlikely. The Imperial College report from Britain envisions 18 months of disruption, with illness coming in waves, as the 1918 flu did. One scenario has the virus abating over the summer months only to come roaring back in the autumn.

We can hope that this virus will be short-lived, but it seems foolish to depend upon it.

Postponing a primary election, particularly when one candidate has basically sewn up the nomination, seems relatively benign. But postponing a national election is another matter.

Trust in our democratic institutions was already at a low ebb, predating the coronavirus. A 2018 poll commissioned by the George W. Bush Institute, the University of Pennsylvania's Biden Center and Freedom House, found that 55% regarded American democracy as "weak," with 68% saying that it was "getting weaker." Large numbers of left-of-center voters feel that the elections of popular vote losers George W. Bush and Donald Trump diminished the legitimacy of the system. Add to that the suspicion, common among Democrats, that Trump would attempt to cancel an election if he thought he were facing defeat, and you have a brewing cauldron of a legitimacy crisis looming.

The vote-by-mail solution has flaws. As Politico reports, processing mail-in ballots requires many more volunteers and officials than the traditional method. The National Conference of State Legislatures reckons that mail-in ballots are actually less costly than in-person voting, but also more subject to fraud. Critics, they note, object that "ballots can be lost at any stage of the vote-by-mail process, that such a system relies on an already strained U.S. Postal Service, and that voters outside a polling place can be more easily coerced into selecting candidates and measures they do not support."

Legislatures would have to change state laws in most states to permit mail voting, which may be difficult if self-quarantining continues more than a couple of weeks. Nor would current constraints -- people working from home -- easily permit states to devise the anti-fraud measures necessary for an all-mail system.

Here is a suggestion, offered in all humility. There may be many flaws. But why not extend voting from one day to seven days? Voters could be assigned particular days and times to arrive at polling places based on the alphabet. That would prevent large groups from congregating. Weather permitting, voting stations could be moved outdoors wherever possible. This does not prevent the problems attendant to early voting -- if voting began on a Wednesday and ended on a Tuesday, something could happen on Sunday that would make millions of voters regret their choice. But it's only a week, not months, as some states already (unwisely) permit, and under these extreme circumstances, it seems a chance worth taking. And only this time. Under normal conditions, voting should return to its tradition, one of the solemn sacraments of democracy.