Mona Charen
|
Posted: Mar 15, 2019 12:01 AM
Share   Tweet
The opinions expressed by columnists are their own and do not necessarily represent the views of Townhall.com. 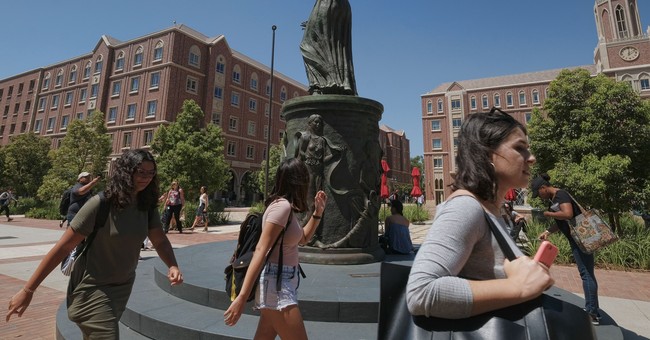 "This scandal exposed the fact that there is a misplaced emphasis on so-called affirmative action inequities, rather than privilege," one education consultant told The New York Times. The paper quoted a black parent: "You often hear talk about pulling yourself up by your bootstraps and that college admission is based on merit. What this story tells me is that the playing field is not level based on race and wealth."

A Washington Post columnist hit the same theme, asking: "Now that the FBI has shown what stealing a college slot really looks like, can we stop making students of color feel like frauds?" Theresa Vargas, noting that she spoke from personal experience, complained that:

"For so long, people of color who have attended elite schools in this country have felt the need to prove that they deserved to be there. They have accepted that no matter their grades or SAT scores, people will look at them as affirmative action recipients and talk about them, sometimes to their faces, as tokens.

"...all those people who have blamed poor brown and black kids for taking the spots of 'more deserving' white kids through affirmative action should have been looking closer at who really didn't earn their seats."

Whoa. This is stealing a base. The FBI has not shown that every white kid who gets into college has bought and/or lied his or her way in. As for the stigma that attaches to affirmative action, that's an unfortunate and inevitable byproduct of racial preferences. It's one of the reasons to oppose them. It's great to be at Stanford, but much less satisfying if you are saddled with the suspicion of being an affirmative action baby.

Many of the lamentations this week about "white privilege" and "poor minorities" have seemed frozen in a time warp. Black and poor are no longer synonymous. As the Institute for Family Studies reports, the share of black men in the upper third of the income tier rose from 13 percent in 1960 to 23 percent in 2016.

A bunch of cheats lied and bribed their way into some top schools. They deserve the scorn and criminal prosecutions they're facing. But the rush to say, "See, this proves the system is rigged for rich, white kids," is not proved. Yes, wealth confers benefits (even without cheating). And some wealthy people are also black, brown and other tones. But college admission standards also explicitly "privilege" some minorities at the expense of other minorities and the majority. As the suit by a group of Asian-Americans against Harvard has shown, Asian-Americans have the lowest admit percentage of any group -- along with the strongest credentials. Black students admitted to Harvard over the last 17 years had average SAT scores of 703.7 compared with 766.6 for Asian admittees, and 744.7 among whites. It's not a huge difference, but it's not a conspiracy in favor of whites either. If anything, the unfairness to highly qualified Asian students, and not the Operation Varsity Blues, is what throws the meritocracy into doubt.

Isn't it extraordinary that the students who got into top schools by fraud seemed to have little trouble performing there? This should cause more raised eyebrows than the finger wagging about privilege. What does this say about grade inflation and academic rigor?

What this scandal and the intense interest it has sparked demonstrates, among other things, is that we've come to invest way too much importance in brand names. You'd think parents wanted prestige for themselves more than the right fit for their child. The opaque nature of admissions decisions, together with schools' dishonest claims of "holistic" evaluations of each candidate, invite cynicism. When my brother was a student representative on his college's admissions committee, he noted that a few applications got a special FI stamp in red. That stood for family influence. The family in one case was named Ferrari.

Perhaps a better system would be to eliminate all preferences -- racial, ethnic, geographic, legacy, donor, sports -- all of it. Take students of proven ability who want to learn, and provide scholarships based on need. It might just improve everyone's morale.